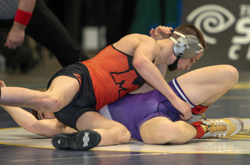 The race for the Division II team state championship at the 2015 NYS tournament was a tight one between loaded squads from Mexico and Locust Valley. The two were separated by less than three points heading into the championship bouts on Saturday night, with three finalists apiece.

“It was on my mind the whole time,” Theo Powers said. “Throughout the tournament we were all trying to pick up bonus points wherever we could.”

Powers certainly did his part, not only winning the 113-pound NYS title, but doing it in dominant fashion with a major and two falls.

In fact, one of those pins came in the championship bout against 2014 state gold medalist Dane Heberlein of Alexander after Powers and Heberlein had split a pair of matches earlier in the campaign.

“I don’t think about the past when I wrestle,” Powers said. “It was a different match [against Heberlein] every time. I just had to make sure I was doing the right things this time. I felt extremely confident going into the final. I just wrestled my style.”

On bottom in the second period, Powers worked for the reversal and shortly afterwards put Heberlein on his back for the fall. It was a moment he said he'll always remember.

“Honestly, everything was so unreal,” he said. “It was a dream come true - that’s really what it was.”

Powers left the Times Union Center with more than just an individual gold, however. When all was said and done, Mexico finished on top of the standings by 4.5 points. [In addition to Powers, the Tigers had a number of placers - Austin O'Reilly (3rd at 106), Austin Whitney (5th at 145), Trevor Allard (2nd at 170) and Jacob Woolson (champ at 182)].

“The team title means as much or more than the individual title,” Powers said. “It meant a lot for our school. It was such a special group of guys. I’ve been working with them all the way from pee wees so it was such a big accomplishment.”

Those accomplishments and others caught the attention of college coaches. One institution Powers decided to take a look at was Brown University, a place he visited for a prospect camp last spring.

“I loved the camp, the coaches and the campus,” he said of his first impression.

It was an experience he didn’t forget as he went through the recruiting process. After spending time in Providence again this past weekend, Powers gave his commitment to head coach Todd Beckerman and the Bears.

“I felt Brown was the place I wanted to be for a while,” Powers said, adding he'll likely begin at 125 pounds. “I loved it every time I’ve gone there. Everybody is just happy there. I love the attitude. The Ivy League education is huge and the wrestling is great. I never saw any downside to being there. There are so many positives.”

Powers plans to major in mechanical engineering when he arrives in the fall of 2016.

“My dad’s an engineer and I’ve always loved math and science,” he said. “I’ve always been interested in taking things apart and how things work. It seems like the right path.”

The path Powers is looking to follow next February is the one that leads him back onto the podium in the state capital for the fourth straight time, after taking sixth at 99 in 2013, third at 106 as a sophomore and winning it all at 113 last season. But his goals involve more than just earning All-State honors again.

“I really would like to go undefeated. Nobody at my school has done that,” Powers said, noting that he’s not sure what weight he will compete at as a senior. “And I want my second state title.”

Theo Powers wanted to thank Mexico coaches Bill Kays and Troy Tooley, club coaches Gene Mills and Tim Boda, all his wrestling partners, his parents, friends and family. “I appreciate all the support I have and thank everyone who’s been there for me.”