This article was originally posted in September of 2015 after Yianni Diakomihalis captured a Cadet World Championship.  He will take the mat again this weekend, looking for his second straight gold.  He is joined on Team USA by fellow New York star Vito Arujau, who will look to bring more championship hardware back to the Empire State.  Arujau competes on Saturday, with Diakomihalis wrestling on Sunday. 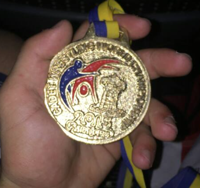 “I’m back to practice on Wednesday,” he said after arriving home on Monday night from Eastern Europe. “I know I gotta get better now and do even more. Getting right back to practicing - that whole mentality is part of the reason I’m winning these titles.”

Indeed, his resume is full of championships - three New York State titles, two Super 32 high school crowns, a FloNationals belt and many more achievements. And over the weekend he added the Cadet World Championship when he captured the 58 kg class in Bosnia in convincing fashion.

“When it was time for my first match, it was awesome,” Diakomihalis said. “There was so much energy in that arena - it was electrifying in there. I had to focus on relaxing myself.”

It didn’t take long for him to relax and get down to business. He scored a takedown less than 10 seconds into his opening bout and about a minute later, he was a 10-0 winner against Maksat Talkambaev of Kyrgyzstan.

“He wrestled right before I did,” Diakomihalis said of Hasanov. “I watched him and saw that low shot he took at the right leg. I wish everyone would take that at my right leg. It played into my style. I let him get in and cradled him.”

“I didn’t even realize he was a World medalist until someone pointed it out to me,” Diakomihalis continued. “I didn’t know what to expect coming into the tournament, but after that, I felt like, I can wrestle with these guys. I can beat these guys. I can win this.”

He cruised past his next foe, Dymtro Mykhniuk of Ukraine 10-0 to bring up a semifinal showdown with Soslan Guchakov of Russia. For the first time in the tournament, Diakomihalis was scored upon as Guchakov took an early 2-0 lead.

“I had almost taken him down earlier,” Diakomihalis said. “I was losing the match, but I just told myself to take a deep breath. It was only about a minute in and it wasn’t nerve wracking for me because I knew more points would be scored.”

Diakomihalis would score the next ones on a big takedown as the opening period expired to make it 2-2 with the Hilton High wrestler holding criteria.

“That closing takedown at the end of the first was important tactically,” he said. “Now, I’m winning so he has to open up a little bit and we can get in some scrambles, which is what I wanted. I could take fewer, more high percentage shots while he had to force the action.” 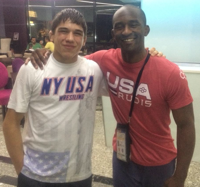 Diakomihalis extended his lead to 4-2 in the second before the wrestlers traded exposure points to make it 6-4 in favor of the New York star with about 10 ticks left in the match.

“I was prepared for that situation,” Diakomihalis said. “Every practice at the OTC [Olympic Training Center], we did 10 second drills -- you’re up two with 10 seconds left or you’re up one with 10 seconds left or you’re down two. I looked at the clock and thought about how I had done this drill hundreds of times in the past week and now I’m in the situation. I texted Coach [Brandon] Slay afterwards and thanked him. He told us how important those drills were and they won the semifinals for me. I felt so ready.”

He was. When Guchakov attacked, Diakomihalis turned it into four points for himself, a 10-5 victory and a trip to the finals.

Then Diakomihalis had a few hours until he was set to take the mat again. He thought a bit about his finals opponent, Jintaro Motoyama of Japan.

“I watched his semifinal against the Iranian,” Diakomihalis said. “He wrestled left handed, which I’m not used to. He was very fundamentally sound and I thought I should stay away from scrambling with him. I needed to wrestle a very technical, good head/hands defense kind of match and let it be about my shots.”

However, Diakomihalis said in the hours before the championship contest, he did other things as well.

“I was trying to relax, trying to get out of that wrestling mode for a little bit,” he said. “It was very taxing emotionally being in that high energy and high stress environment all day. I was relaxing with the other guys and trying not to think about the fact that I was in the World finals.”

But then the time arrived.

“I heard them announce my name and I got a little anxious, with everyone screaming and yelling,” he said. “Here it was, the World finals, probably the most significant match of my life so far. Walking out there, the pressure built up. But at the same time, it was really exciting. It was hard to believe I was about to wrestle for a gold medal.”

Like in the semis, Diakomihalis fell behind on an early takedown by his opponent. Once again, he had an answer.

“He got that opening takedown and I felt that shot immediately,” Diakomihalis said. “Once he did it, I knew what I had to defend and I made adjustments to defend the other times he took that shot. He had good leg attacks. I thought it would be hard to score off his shot, so I knew I had to create my own.”

He did that, picking up a huge four point move to move ahead 4-2 after the first period. And in the second stanza, he tacked on another takedown on the way to a 6-3 victory, a result that was cheered by a loud contingent of supporters.

“I was so excited,” he said. “I didn’t even know what to think. It didn’t hit me until I got to the bleachers and my dad said, ‘I can’t believe it. You just won Worlds.’ There was this realization. I talked about this moment my whole life and it happened.”

He wants it to happen again. Diakomihalis is looking for a return trip to the Cadet World championships next summer.

“I’ll try to make this team again because I’ll still be a Cadet,” he said. “I might also try Juniors to see if I can make the team. [USA teammate] Daton [Fix] made the finals this year in Juniors and Spencer Lee won the Junior Worlds this year at 17 years old. I may test it out and see how well I can do.”

Whatever he decides, there’s no question that his freestyle future is bright.

“At the OTC, I got to wrestle with [USA Senior World team member] Reece Humphrey,” Diakomihalis said. “He’s one of the best in the world. He beat me up -- I definitely wasn’t beating him, but I was competing with him. I saw I’m good enough to wrestle with these guys. I’m clearly not ready for the Senior level yet, but I’m getting there. It was a big confidence thing for me.”

He will certainly be confident going into the folkstyle season, where he plans to wrestle at the upcoming Waterway Duals, Journeymen Classic and Super 32 Challenge, among other events.

“I’ll probably go 132 [pounds] for Super 32 and then go 138 during the high school season,” he said. “I don’t want to cut weight - I just want to focus on becoming a better wrestler and get ready for the college transition. I’m so excited about Cornell.” [Diakomihalis, a junior, committed to the Big Red last November].

He will receive a warm reception in Ithaca, just as he did when he arrived at Rochester Airport on Monday night to more than 50 people holding signs and cheering for him.

“I didn’t expect that,” he said. “I had a conversation with my mom and she told me some people wanted to meet me at the airport - no big deal. I guess word got around and it was my entire family and some of my close wrestling friends. It was a cool thing, I was really happy.”

It was an appropriate welcome for a champion.

“Standing up there on the podium, hearing the national anthem, having the projector screen showing the United States at the top - the whole experience was awesome,” he said. “Even when I was standing on the podium, I was still in shock. I couldn’t wrap my brain around being a world champ then. I’m not sure I even can now.”

Yianni Diakomihalis had a number of thank yous. “I want to thank my family, training partners, USA wrestling for the experience at the Olympic Training Center, my coaches and everyone who helped me. There are way too many people to name. I have a great support system and that made this possible.”