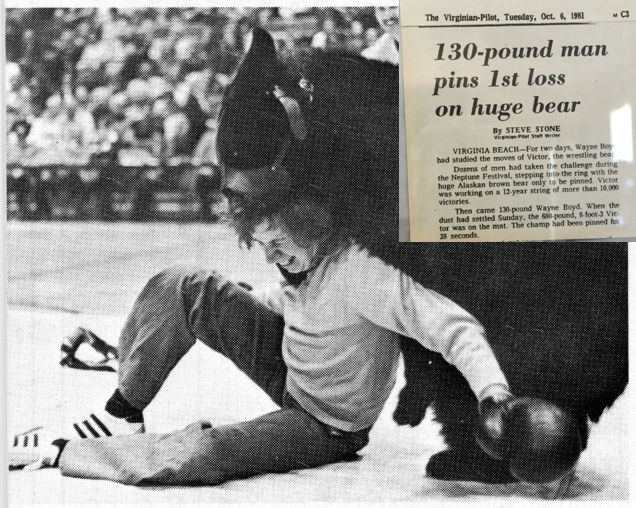 In light of the upcoming wrestling season and tournaments like Freakshow and Monstermatch, we felt the need for a story to match the level anticipation. Today we have a true #Freakalert #Monsteralert combination, a story that will chill your bones.

In 1981, collegiate wrestling legend Wayne Boyd, now the head coach of Titan Mercury Wrestling Club downed a beer and stepped onto the mat with a 680 lb bear. Victor the Bear had a record of 14,999 victories at the time of the match.

“He had wrestled some of the greatest wrestlers in the world. Freestyle wreslers, WWE wrestlers. Victor was out of North Carolina, a guy named George Allen was his trainer and coach, and he literally taught the bear how to wrestle. The bear had a tremendous single leg tackle.

“He’d rear up sometimes, stand up on his hind feet, it was very intimidating, he was 8 ft tall and he weighed 680 lbs. So when he got up on his hind legs, and they don’t stand up like that very long, it’s just too much weight to carry, but he would come up and lean down on you, and if you got underneath him, he would crush you to the mat, there was nothing you could do to stop him.”

Wayne wrestled Victor the bear at the Neptune festival in Virginia Beach at 30 years old and a mere 140 lbs. The historic match was on the boardwalk in front of about 500 people with a surprisingly festive atmosphere considering the level of competition.

“I chugged a beer, I went in there, and I stayed away from him, I just kept avoiding him. At one point he ran at me, and rammed me into the fence of the ring. I was crushed up against the fence, but he couldn’t pin me because I was standing up, but he was mauling at me with his head and his face.”

This particular bear had a muzzle on to protect the wrestlers from its bone-crushing jaws.

“Later when I took the bear out on circuit myself, he bit a guy’s three fingers off because he got his hand inside the muzzle, so he could bite you if you made a mistake.”

“They brought out the chain link leash and they pulled the bear off me. That was two and a half minutes in, and I was exhausted. We went back in on our feet for another minute and a half.”

Somewhere at about the 4-minute mark the bear head butted Boyd in the face and broke his nose. “The blood was gushing,” said Boyd. At that moment, Boyd caught the bear with a tackle.

“It shocked him, and he sat back onto his legs and I did a left handed pancake to his back, and then I just balanced him on his back.”

But the match wouldn’t end that easily for Boyd, the bear’s shoulders were still not on the ground, so he had to improvise, “I rocked him up onto the back of his neck where his shoulders were squarely pinned, George Allen through in the towel, and at that moment, I became the only man to pin Victor the Wrestling Bear.”

“It was an extremely challenging and scary moment, but once you get in there, it’s like any endeavor you just have to be where you are and be the best you can be.”

In the spirit of Wayne Boyd, channel your inner bear and don’t miss out on seeing elite competition at RMN Events/NUWAY’s Freakshow.