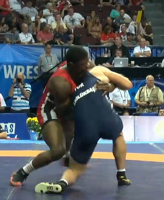 Nathanael Rose made his debut at the World Championships on Friday in Las Vegas and got his hand raised in his first match.  Representing Trinidad & Tobago at 97 kg in Freestyle, Rose beat Aurelio Valdez Chairez of Mexico by 10-0 technical fall in his opener.  The University at Buffalo wrestler then was defeated by Turkey's Ibrahim Bolukbasi and when Bolukbasi lost his next match, Rose was eliminated.

Next up for Rose: his freshman campaign for the Bulls where he looks to win the starting job at 197 pounds.

For more on Rose, see below. 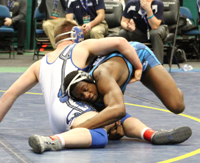 Nathanael Rose has been in control of nearly all his matches over the past two years, as he captured two state championships for Eagle Academy. But when he first arrived at the University at Buffalo in July, he said things were a little different.

"At first, I was getting beaten up," he said. "But after a while, I started taking people down and going back and forth with people. My hand fighting has gotten a lot better. I was used to wrestling from space, but I've gotten better controlling the ties and setting up my shots.  I had to get used to it. It was a different wrestling experience - the next level."

He'll soon be seeing another level as he is set to represent his native country, Trinidad and Tobago, at 97 kg at the Freestyle World Championships in Las Vegas on September 11.

"It's a great opportunity, wrestling the best guys in the world," Rose said. "I'm looking to go out there and wrestle as hard as I can against those guys."

It won't be the first time for Rose in international competition as he took the mat in April at the Pan American Championships in Chile, grabbing fifth place.

"It was a pretty good experience," he said. "I'm excited to wrestle for Trinidad & Tobago. But I do all my training here [in the USA]."

That's because Trinidad & Tobago is just building the foundation in Freestyle wrestling, according to Rose.

"There really isn't a team," he said. "There are two people now and it's just starting. There's never been an Olympic wrestler before from Trinidad & Tobago. It's very exciting. I think about it every day, being the first ever Olympic wrestler."

Rose is used to being the "first".

After all, in high school he picked up All-American honors at both Virginia Beach and in Junior Freestyle at Fargo, which, according to Eagle Academy coach John McGarry, hadn't been done before by a wrestler from the school.

And, his dominant state championship season in 2014-15 made him the only grappler from the PSAL to ever be a two-time NYS gold medalist.

"It feels pretty good to be a part of history," Rose said. "I set a goal and accomplished it and that feels good. But it's all baby steps to what I'm training for, what I want to do next."

Rose said he's looking to start right away for Buffalo at 197 pounds this season.

"I'm working hard right now because I'm looking to be a national champion," he said. "That's my main goal. I like making a name for myself."

He definitely made a name for himself during his high school days. With the World Championships and his college career approaching, Rose has the chance to do it all over again.