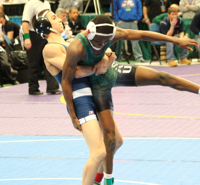 Another New York wrestler will be joining the Pack.

“NC State is my dream school,” Cox said. “I’ve wanted to go there for a long time. My friend [recently hired Hofstra assistant] Joe DeAngelo went there and I got interested.”

Cox said he also considered Navy and Air Force and was contacted by schools like Pennsylvania, Lehigh and Brown, but his recent visit to the Raleigh campus gave him many reasons to choose NC State.

“I liked everything about it,” Cox said. “I liked the coaches and the climate is nice and warm.”

Cox is currently ranked #1 in the nation at 106 by the Associated Wrestling Press and #4 by FloWrestling, in part due to his big time performances at some of the nation’s most prestigious events.

Last fall, in a bracket of more than 100 wrestlers, Cox went all the way to the finals at the Super 32 Challenge in North Carolina before taking second at 106.

“That experience was great,” he said. “I woke up before the tournament and I felt different, like I was gonna win. I just wrestled hard and made it to the finals. It was a big tournament for me.”

He followed with a third place showing at the New York State tournament in a loaded bracket that included four nationally-ranked wrestlers as well as an additional returning NYS medalist.

“I love the competition, so it was really good for me to be at that weight,” he said. “I was satisfied with how I wrestled. The year before I took a loss at the state tournament and couldn’t bounce back. This year, it was different. I was more mature. My mindset was better. I took a loss and said in my head that I would come back and take third and then I did.”

Cox wasn’t finished. At the NHSCA Junior Nationals a few weeks later, he dominated his way to the finals with a technical fall, pin, 8-0 major and 5-1 decision. He was then set to face fellow New Yorker Kelan McKenna of New Hartford for the title.

“It was the first time we wrestled,” he said. “I knew he would be tough, but I just thought about lighting up the board as best as I could. I felt like I was in control the whole way.”

The Deer Park wrestler won 8-3 to capture the national championship.

“I was really excited, but I knew after that match that I would have to go back home and continue to work because the journey isn’t over.”

That journey continues with Cox’s first trip to Fargo for the Freestyle National championships next week, where he plans to compete at 113 pounds.

The future North Carolina State wrestler has certainly proven his toughness on the national stage before.

Tommy Cox is coached at Deer Park by Mike McLaughlin and also works with Mike and Ryan Patrovich.  He said he often trains with North Babylon’s Anthony Sparacio and Tony Negron.