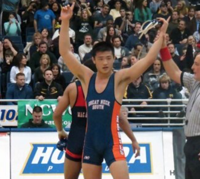 Another has been added to the mix as 2013 state runner up Chris Koo of Great Neck South will join Bearcats after transferring from Oklahoma State.

“Right after nationals ended, I made the decision to come back home,” Koo said. “I needed to be closer to my family to help them out any way I can. Being at a state school makes it easier on my parents. They help me out a lot. It’s time for me to return the favor.”

Koo said he narrowed his choices down to Binghamton and Buffalo before selecting the Bearcats.

“The coaching staff is great,” Koo said. “They have a really good understanding of what it takes to be successful and what the team needs. I’m so happy to be close to home and I’m really excited to get started here.”

Koo is already on campus, getting acclimated while living with several teammates. He said he expects to compete at 157 pounds, where he will be a redshirt sophomore.

“It was a great experience,” he said. “I liked everyone on the team and the coaching staff. I learned a lot. I think what I’ll take away from it is the mentality of always bringing that same intensity. You have to be ready to wrestle every day.”

Koo registered victories in competition against Marstellar and highly regarded recruit Ryan Blees, but said “it didn’t mean that much because at the end of the day, I never got to start.”

He did, however, make leaps in his wrestling, which he is excited to show in his return to the Empire State.

“My mindset has definitely changed,” he said. “But I guess the biggest change you can see in me is that I’m always staying in position and focusing on the little things. Everything counts at the Division 1 level. You have to pay attention to all the details because they make a difference. I’m fortunate and excited to start the season here at Binghamton. It’s a great staff and there are great partners - really, really tough New York guys. I’m ready to start scrapping with them. Right now, it’s hard not to be excited about what’s next - I’m just really pumped to get going.”