For more on the future Wolfpack 133 pounder, from an interview done several days before his decision, see below. 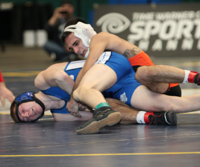 Last week, we posted an article on the top rising seniors in New York State, with Amherst’s Kellen Devlin on top of that list.  We spoke to Devlin last Wednesday as the recruiting period started to hear his thoughts on college and what he’s doing to get ready for a run at three straight state titles.

Kellen Devlin (KD): I’m actually down in South Carolina on vacation, and I visited NC State during the trip. I’m also looking at American, Old Dominion, Virginia and Nebraska. Those are my top ones for now. Those schools have reached out to me and showed the most interest.

NYWN: Do you have a timeline in mind for when you want to commit to a college?

KD: Colleges have been telling me that it’s best to make a decision before the season starts, but frankly, I don’t know when I’ll commit. I feel like I’ll commit when I’m 100% sure that I know where I want to be. So I guess that could be tomorrow or in a while.

NYWN: What are the things you’re looking for in a college?

KD: I think the most important thing is that I’m looking for a great environment academically and a good, solid wrestling team.

NYWN: What weight do you see yourself wrestling at the next level?

NYWN: You won the 126 pound title the past two years in Division 2 in New York and then won the NHSCA Junior Nationals championship at Virginia Beach at that weight.  You had taken third and second the previous two years at NHSCAs, so how big was it for you to win it all?

KD: That was awesome. It was such a big bracket - I think there were 130 wrestlers. I was just focused on taking one match at a time because it can be intimidating if you don’t.  My past success in the tournament didn’t mean anything. The guys I wrestled didn’t care at all. In an unseeded bracket, you never know who you’ll get. After it’s over, you can look back and realize it was really awesome.

NYWN: Tell me a little bit about the finals victory at that tournament against nationally-ranked Alex Mackall of Ohio?

KD: He’s a really good wrestler. I got out in the second to go up 1-0 and he took bottom in the third. I got some backs to go ahead 3-0. He reversed me to make it 3-2 and then he cut me in the last five seconds so it finished 4-2. It was probably the biggest win of my career.

NYWN: What would you say was your biggest win in New York?

KD: Probably my first state finals against Ryan Snow [of General Brown, a 4-2 win in 2014]. He’s a tough kid and winning my first state title was memorable.

NYWN:  What have you been doing wrestling wise since your second state title and the NHSCA Nationals?

KD: I’ve done some dual tournaments here and there so I don’t get rusty, but mostly I’ve been doing individual work. I’ve really seen my improvement come from the offseason in the past. I know that I’m a good wrestler, but there are so many people who are better. I want to get to new levels every year. Now’s the time to fix the little things that will make a big difference. I have one more dual tournament coming up in a couple of weeks. I plan to compete at the Journeymen Classic and Super 32 before the season.

NYWN: You hold many Amherst High School wrestling records going into your last season. Which of those records is most important to you?

KD: There are a lot of cool things like takedowns and near falls compared to other kids in the history of the school. But the one that’s most important is wins. Before me, the record holder had about 150 wins in his career. Right now, I’m sitting at 210 with my senior year to go. I want to make that record untouchable.

NYWN: What other goals do you have for your senior campaign?

KD: I’m keeping it really simple. I want to be an undefeated state champ.

Among those Kellen Devlin said were important to his success were his dad (Greg Devlin), coaches like Dennis Bauer and Dan Bishop, his two brothers Steve and Brad Devlin who are assistants at Amherst, as well as workout partners Cody and Scott McGregor.