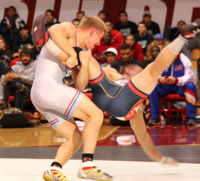 Dake began the day in the Challenge tournament, where he was the #3 seed.  In his first match, the former Cornell star dominated Colt Sponseller with a 10-0 technical fall.  Dake then scored first against Andrew Howe with a takedown and emerged with a 3-1 victory after demonstrating tremendous defense as time wound down in the second.

Next up was a familiar foe - David Taylor.  Dake was in control the whole way, riding two first period takedowns to a 4-0 advantage.  He kept extending his lead after the break, going ahead 8-0 before Taylor scored in the waning seconds for an 8-2 final.

Dake’s impressive morning earned him a spot in the best of three finals series against Burroughs. In the first match, the New York native led 2-1 after the first period on a takedown.  However, on a call that has been discussed quite a bit, Burroughs was then awarded four points on a throw near the edge. It was challenged and upheld, giving Burroughs another point and a 6-3 win.

In round two, Burroughs came out firing, picking up a takedown and getting to work with leg laces to take a quick 8-0 advantage.  After injury time, Dake responded with four straight points, but Burroughs then finished the job with a 14-4 result.

Dake wasn’t alone on the podium among wrestlers with New York connections.

Enock Francois, who trains in Ithaca and was an assistant at Army, beat Cayle Byers 3-1 in his initial bout before falling to JD Bergman at 97 kg. In the wrestlebacks, Francois earned a tech fall over David Zabriskie to earn a bid to the third place bout of the Challenge Tournament versus Dustin Kilgore. Francois led 6-0 within 15 seconds of the match’s start, but Kilgore stormed back to take an 8-6 lead. The former Kent State star defeated Francois 14-8.

In women's action, Carlene Sluberski (Fredonia, Brock University) also picked up a trio of victories at 53 kg to take third, while Alexis Porter (Shenendehowa HS, McKendree) finished in the same spot at 63 kg.  Sluberski picked up a technical fall before a 7-3 win in the wrestlebacks.

At the Junior Freestyle World Team Trials in Madison, Wisconsin on Friday, Jake Gunning of the Buffalo RTC took runner up honors at 120 kg.

Gunning began the day by winning the Challenge Tournament with a trio of victories. He outscored his first two foes 11-2 before blanking Columbia's Garrett Ryan 5-0 in the title bout. (Ryan had registered technical falls in each of his first two matches).

That performance earned Gunning a place in the best of three finals series against Nathan Butler of Stanford. Butler swept the first two bouts to clinch the position on Team USA.

Another Buffalo RTC wrestler medaled at the event, with Joe Ariola nabbing fourth in the Challenge tournament at 96 kg.

Ariola's first round opponent was Ben Honis of the Finger Lakes Wrestling Club, who beat the Buffalo grappler 9-1, before pinning Iowa State's Marcus Harrington.  Honis went on to take second in the Challenge tournament.

Action will continue on Saturday and Sunday with the Senior World Team Trials from Madison.

Full brackets are available at www.trackwrestling.com. The champions of the Junior World Team Trials were: