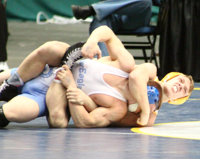 Alex Herringshaw has always had a connection to the military.  After all, he said his father had 26 years of active duty with the Army National Guard.

So when the chance to carry that link forward presented itself, Herringshaw took it, committing to Army a few days ago.

“This is a great opportunity to continue my connection and serve our country,” he said. “My brother applied to West Point and it was always a thought in the back of my head. Doors opened for me after Virginia Beach and this was one of them.”

At Virginia Beach in March, Herringshaw added another impressive item to his resume, capturing the NHSCA Junior National title at 160 pounds. In a bracket that featured several nationally-ranked wrestlers, including Daniel Bullard of Georgia, Elijah Cleary of Florida and Tucker Leavitt of Idaho, Herringshaw went 7-0 with two pins and a technical fall.

After cruising through his first several matches, Herringshaw faced Georgia’s Devin Kane in a semifinal battle that went down to the wire.

“Honestly, the kid kind of dominated in the beginning. He was a big kid, a really tough wrestler,” Herringshaw said. “I think I was losing 7-4 going into the third, but I didn’t stop wrestling. With five seconds left, I threw him for a four point move. I got the two back points as time ran out. It was a crazy match.”

After that dramatic 8-7 victory, Herringshaw jumped out to an early 2-0 lead with a first period takedown against the previously mentioned Leavitt and earned a 3-2 decision to earn the national championship.

“It was an awesome experience,” he said. “It was the second time I’ve been down there. The first time was in Middle School and I got third. This was huge. My whole family came down and I knew I had to make it worthwhile. I wanted to see how I’d do against some of the best kids in the country around my weight.”

It wasn’t the first time he fared well against standouts from around the nation. Herringshaw nabbed third at the Freak Show in Las Vegas last fall and he looks forward to taking the mat against top competition in the coming months.

The next chance will be at Fargo in July. Last year, he won his first two matches in Cadet Freestyle action in North Dakota by tech fall and pin before suffering an injury that forced him to default out of the event.

“I’ve been training pretty hard for Fargo,” he said. “After last year, I’m hungry to go out there and at least get on the podium for sure. I want to make a name for myself in Freestyle.”

After that, he’ll look to go to the top in folkstyle again at one or more of the premier national tournaments.

And then it will be time to begin his senior high school campaign for Holland Patent, where he looks to capture his third consecutive state title after winning at 145 as a sophomore and at 160 in his junior season.

“I didn’t think winning the second state title was harder than the first one,” he said. “I had to wrestle the same. I worked my butt off like every year. I never stop training to be first.”

That training paid off at the Times Union Center as he dominated his way to the top with a pin, a technical fall, a 4-1 decision and a 14-6 major in the finals over Jason Hoffman of Hadley-Luzerne/Lake George.

“I felt really good going in,” he said. “I wasn’t cutting much weight and I had a really good week of training right before. I felt like I was ready to go and win.”

He plans to continue to rack up victories in Section 3 and then at West Point.

Herringshaw certainly noticed the winning Army did this past season, the first under head coach Kevin Ward, including the first dual victory over rival Navy in more than a decade.

“I really like what I see from the program,” Herringshaw said. “I felt bad because I gave a verbal to Buffalo before and I was ready to go there. But I think big things are going to happen at West Point and I’m so happy to be a part of it.”

He saw some of the things he’s looking forward to up close on his May visit to the institution.

“The campus was beautiful and I really like the strict regimen and the military lifestyle,” he said. “I just can’t pass up on an opportunity like West Point.”