Super Siblings: PJ and Abby Duke Rack Up Pins & Titles in NY ... and Beyond 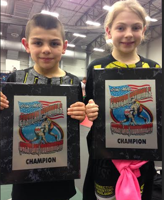 The Duke family spends quite a bit of time in the car traveling to wrestling tournaments.  Once they get there, however, the matches often aren’t that long.

The NYWAY State tournament in March was a good example. The brother and sister combination of PJ and Abby Duke wrestled a combined nine matches on the campus of Ithaca College. The result? Nine pins in a total of less than 10 minutes -- and two championships.

PJ Duke, an eight year old who typically wrestles at 70 pounds, was 55-0 this season prior to winning the recent Pop & Flo Minimen Nationals. He pinned his way through most of his events this year, including the War at the Shore and the NUWAY National Duals in January, during which he recorded six falls and was named the Most Outstanding Wrestler for the 8 & Under tournament.

Meanwhile, his older sister Abby (11) has displayed similar success, capturing titles at the Gene Mills Eastern Nationals, the War at the Shore and in boys action at the NYWAY Hudson Valley Region tournament. She also went 4-1 at the NUWAY National Duals, defeating wrestlers from Illinois, Pennsylvania and Michigan.

“They both love to do the bigger tournaments,” said Annie Duke, their mother. “It’s no surprise – they’re 8 and 11 – so anything that has a bigger trophy sparks their interest. They thrive on competition; that vibe you get in the arena.”

The Duke family has gotten used to that winning vibe, but the competition doesn’t stop at the events.

“They’re mostly in different age brackets, but every once in a while they’ll face each other at practice and they fight to the death. They’re very competitive.”

It all started when PJ and Abby Duke were involved with karate and ju jitsu.

“They enjoyed the grappling side of it and just kind of stumbled into wrestling,” Annie Duke said. “PJ started first, when he was four, and he found his niche right away. He naturally loved it and excelled.”

When he wanted to work on things at home, he needed a partner.

“That’s actually how Abby got into it,” she said. “PJ would be practicing, using his sister as a practice dummy. She would learn the moves faster than him. She learned how to defend herself and it snowballed from there.  I never saw it coming, but she loved it too and gave up Irish dance to wrestle.”

Indeed, wrestling has become the focus activity for both Duke kids.

They knew that they were fully caught by the wrestling bug when they were out to dinner on a Saturday night in March of this year. Realizing what time it was, they took out an iPad and tuned into ESPN while at the restaurant.

“It was the NCAA finals,” Annie Duke said. “We love to watch college wrestling and we had to watch Brian Realbuto in the finals. He wrestled at Iowa Style like our kids do. We had the iPad on the table – it was a little crazy.”

The Dukes hope to follow some of their other favorites, such as another Iowa Style alum, All-American Kevin Jack of North Carolina State, at the college level someday.

But for now, the Dukes, who have been to tournaments in more than a handful of states this year and hope to get to the Tulsa Nationals in the future, are enjoying the ride.

“My husband never wrestled and neither did I,” Annie Duke said. “But there’s nothing else like it.”