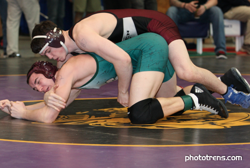 When he walked into the wrestling room at Garden City High School as a freshman, Tom Lane didn’t exactly consider himself an expert in the sport.

“I had no clue,” he said. “ I didn’t even know what the state tournament was all about. When Mike Lofrese took sixth in the state for Garden City and I thought that was amazing – he was a legend.”

Lane must be a legend now, too, as he ended his high school career as a bronze medalist at the Times Union Center at 182 pounds in 2015 following a 42-3 campaign.

As a freshman, Lane said he filled in for the varsity squad three times (and said he lost each time) and went 0-1 at the county tournament as a sophomore in a season in which he had double digit losses.

But after that 10th grade experience, Lane decided to dedicate himself to wrestling, although he’d been playing football for years.

“I fell in love with the sport and I met Vougar [Oroudjov],” he said. “He told me if I stuck with it, I had talent and potential. If I worked hard, it would pay off in the end. I believed him and got to work.”

It showed. As a junior, Lane made a big leap, going 31-7 at 170 pounds and taking second in Nassau to eventual state champion Steven Schneider of MacArthur. He didn’t stop there, working out every day and putting together impressive showings such as an sixth place medal at the Super 32 Challenge in North Carolina in the fall of 2014.

“After I beat Nick McShea [of Monroe-Woodbury] and placed higher than Christian Araneo at the Super 32, I thought I could go with anyone. [Araneo was the 2015 state champion at 195 pounds, McShea was the runner up]. I thought the state was wide open for me; that I could win a state title. It was a pretty big cut, but I chose to go 182 pounds, really for my team, because we had no one at that weight class.”

His bronze performances at the Eastern States Classic and the NYS tournament opened a lot of eyes and he said he focused on a trio of college possibilities - Cal Poly, Buffalo and Maryland.

“All three schools had their positives,” he said. “I visited Cal Poly over Easter break and when I walked on the campus, I knew I wanted to go there. I fell in love with it. When I first spoke to Coach [Brendan] Buckley, he believed in me – he’s a really good person. He was at Columbia for 10 years, so he knows New York. Coach [Brandon] Hatchett was a national finalist and I liked him too.  The academics are great and I really liked things like the outdoor duals they have there. Plus, it’s 75 degrees every day and 10 minutes from the beach with beautiful scenery. I also know I’ll have some great workout partners – Nick Fiegener was an NCAA qualifier last year at 184 as a freshman.”

Lane, a future 197-pounder at the Division I level, is accustomed to having strong training partners.

“At [Vougar’s Honors Wrestling], I work a lot with [two-time state finalist from Walt Whitman] Vin Feola. We really push each other. [Former Hofstra standout] Ben Clymer has also taught me so much, especially for my top game, which is a major reason I got far. Vougar was always there, coaching me at tournaments and helping me. He’s a major reason I got where I am today.”

Where he is today seems like quite a big distance from where he was just a few years back.

“I feel like I’ve come so far in such a short time,” he said. “Winning counties – placing at states – I didn’t think it was even possible. It’s been such a good experience – all the hard work I put in and all the great people I’ve met along the way.”

“I’m kind of new to the sport and I have a lot more to do,” he said. “I want to keep having fun with it and just win.”