In the fall, NYS champions Tristan Rifanburg and Frank Norwich of Norwich committed to Binghamton University, along with two-time finalist Jesse Dellavecchia of East Islip and multi-time placer Jake Einbinder of Bethpage.

In the last few days, three more grapplers have joined the recruiting class.  To learn more about them, read on below.

Blaise Benderoth left his mark on North Rockland wrestling, as he'll exit high school with 221 career victories, a school record. But his impact goes well beyond the number of times he got his hand raised, according to head coach Jeff Swick.

"Blaise raised the bar; put the program at a new level," Swick said. "The idea used to be for wrestlers to win a Section title. But then Blaise comes along and places at the state tournament a bunch of times. Now, it's not about the Section title. It's about being All-State. He raised the bar."

The bar was raised at the team level as well, as the Red Raiders won Section 1 team crowns in Benderoth's sophomore and junior campaigns.

"I love looking back at my career realizing I was on the two Section championship teams North Rockland ever had," Benderoth said. "It's very cool and I think there will be more great things."

When asked what he felt was his most significant achievement during his career, Benderoth didn't point to a single match or tournament.

"I guess staying on course is my biggest accomplishment," he said. "I was always grinding and having someone pushing me to improve. I didn't break down, or if I did, I got back up and made sure I was getting better and better each day."

That approach led Benderoth to a huge 11th grade year in which he won 46 times and took third place at the NYS championships.  His bronze medal contest was one of many that stood out to Swick.

"He's had so many tough matches against so many tough guys," Swick said. "He had lots of good battles with Jesse Porter from Shenendehowa his junior year, including for third at the state tournament. He beat him all three times they wrestled but they were all one point matches. It's not easy to beat wrestlers of that caliber three times in a season."

Benderoth returned to the Times Union Center as a senior and this time went one rung higher on the ladder, finishing as the NYS runner up at 160 pounds.

"I'm proud of my senior year," he said. "You can't be depressed about one match. You gotta look back at the positives. I gave it all I had."

That wouldn't be the only podium Benderoth would stand on in March. The Section 1 star has been going to the NHSCA Nationals in Virginia Beach for years and said he "pretty much lost in the blood round every time."

Not this year. Benderoth won five matches, finishing sixth at 160 pounds to complete his high school experience as an All-American.

"This year was really nice," he said. "My coach came down with me and my dad was there to support me."

"It's a great accomplishment but it's not something he'll hang his hat on," Swick added. "He showed he could compete with the best in the nation. He's been right there all along, so I'm glad to see him get on that podium and be an All-American."

His next stop? Binghamton University, where he looks to compete at 165 pounds.

"I decided on Binghamton because it gives me a good opportunity to do well on and off the mat," he said. "I'll get a really good education. There isn't much in wrestling after college, so getting a great education is important."

His visit sealed his choice, as he was also considering George Mason.

"The whole team was cool," he said. "I got along with every single one of them.  I like the campus -- really nice, great layout. The wrestling room and the coaches were great - they're really dedicated to the guys on the team."

Benderoth's dedication to the sport, with North Rockland and at other places, like Apex Wrestling Club in New Jersey, has led him to this point.  His coach is certainly excited about what could happen next.

"His last match at Senior Nationals finished with a a loss, so he's very motivated - not content," Swick said. "He had a great senior year, but he's not happy with where he finished. He has the ability to do really well in college and Binghamton is a great fit. If he stays focused, he can be a college All-American, not just a high school All-American."

Blaise Benderoth wanted to thank everyone who's been there to support him, including his parents, Jeff Swick and John Hoke.

Jake Nicholson brought home All-America honors in each of his two seasons at Jamestown Community College.  Now, the former Section 5 standout is ready to see what he can do in Division I as he committed to Binghamton University on Wednesday.

“I liked the campus and it’s a great school,” he said. “You don’t have to worry about getting a job afterwards. When I went on my visit, I got along with the team really well – it was a great group of guys. I want to see what I can do at that next level.”

“I’ve been talking to Tyler a little bit,” Nicholson said. “He’ll be there next year and that was another factor in my decision.”

While at Waterloo, Nicholson was a multi-time NYS qualifier, taking third place at 126 pounds as a senior in 2013.  He went to Jamestown Community College, where the transition was a bit different than he expected.

“I definitely thought it would be easier than it was,” he said. “It’s definitely a big change to go from the high school to the college level. It was the [NJCAA], but it was a big jump.”

Despite the jump, Nicholson seemed to quickly adjust, winning more than 25 matches and notching sixth at the NJCAA National championships at 133 pounds.  In his second campaign for the Jayhawks, he again excelled, this time nabbing fifth in the country at the same weight to earn All-American accolades again.

Nicholson expects to compete at 133 with the Bearcats and knows that the move to Division I will be another challenge.

“Being at Jamestown definitely helped me grow as a wrestler,” he said. “I have a lot more respect for what it takes to get to that next level. I’m looking forward to going to Binghamton next year and I’m ready to work.”

Jake Nicholson wanted to thank “my high school coaches Tyrone Thomas and Andrew Warden along with my coaches at JCC, Robbie Waddington and Kevin Strong, and recruiter Al Rossetti. Without them I wouldn’t be where I am now. I know Rob had a hard time this season, but he was there every step of the way this year.” 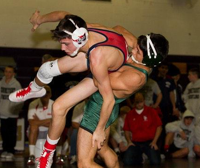 In the quarterfinals of the NHSCA Nationals in Virginia Beach a few weeks ago, Brentwood's Carlos Aucancela clinched All-America honors at 113 pounds with a 7-6 victory over Arick Shankles.

"I'll never forget the moment I beat Arick Shankles; a four-time state champ from Alabama and Fargo All-American," Aucancela said. "It just comes to show how tough Section XI in NY is and how anything is possible despite how much better your opponent is on paper. A sense of success and joy immediately ran through my body after winning my quarterfinal match and that's a feeling you can't replace."

Aucancela went on to take fifth place, defeating Jake Goldenstein of Kansas in his final bout. (He was eighth at 106 in Virginia Beach in 2014).

"Making school history by becoming a two-time NHSCA All-American proved to be one of the most memorable accomplishments of my high school career," he said. "Not many wrestlers can say they ended their high school career with their hand raised."

Aucancela got his hand raised plenty of times over the years for Brentwood, including a 47-5 record in his senior campaign. (Four of his five losses came to state placers, including an overtime setback against NYS champion John Arceri of Huntington). He will look to add more victories to his resume in college at Binghamton at 125 pounds.

"I chose Binghamton because of its great education, exceptional campus life and great coaching staff," he said. "Also, the school is far enough from home where I feel away, but close enough to where I can go home easily. The serenity and calm atmosphere seemed rather appealing to me as well."

When asked about the people who have been instrumental during his career, Aucancela said that the question "could easily turn into a book" and that he would try to keep it concise.

"The quote, 'It takes a village to raise a child' can easily be connected to my life story," he said. "It took the combination of numerous individuals to help me succeed. Many people have been great influences to me throughout my high school wrestling career. Firstly, my high school coaching staff played a very important role in molding me into the young man I am today. I was the crude stone of onyx and they were the sculptors. After years of working with them, they chiseled away my defects and created an eager, young athlete prepared for many obstacles on and off the mat."

"My little brother proved to be a great motivation to me as well. He's my number one fan and he says that I never disappoint him," Aucancela said. "Being a role model is definitely what drives me to succeed. My drill partners were also a huge help when it came to training. As my coach likes to say, 'Champions come in pairs', meaning that you're only as good as your partner is. A few other close friends and teachers helped me throughout my journey, but I don't know what I would do without my dear mother. She has been my backbone and for that, I will always be grateful. My road to success was not easy, but she was always there for me whenever I needed her. She is the strongest woman I know for raising three children on her own and I promised to make it up to her in the future. These people will always hold a spot in my heart for helping me get where I am, but my journey's not over yet."

His journey, along with Benderoth and Nicholson, will continue with the Bearcats.