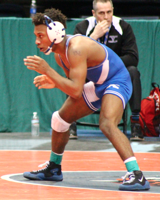 In his first appearance at the state tournament in 2014, Da’mani Burns of Newburgh Free Academy lost his opener and after bouncing back with a win, found himself behind by a significant margin early against multi-time state placer Anthony Orefice of Lockport in the consolation bracket.

“I think I was down 9 or 10 points,” Burns said. “I made a big comeback and ended up pinning him. That was probably the biggest win of my career.”

The fall meant that Burns was moving forward with a chance of earning All-State accolades at the Times Union Center.

“I didn’t believe in myself at first - I didn’t think I'd make it to the second day,” he said. “But then I won that match. I had to cut about nine pounds that night – it was bad. I was telling myself, now I have to place.”

He did just that, recording an 8-1 decision over Nick Toutant in the "blood round" to clinch a spot on the podium. He went on to finish fifth at 126 pounds.

According to Burns, one of the keys to his late season success as a junior was a change in scenery.

“I was having problems with my weight,” he said. “For Sections, I went to stay at Coach [Chris] Leggett's house to make sure I would make weight. It started there and then I noticed myself being there more and more, enjoying it. My grades improved and I stayed focused, on the right track. [Coach Leggett] and his wife, Jeannine, helped me out so much. She was able to bring me to club practices [at Apex] and getting a second practice was so beneficial for this season.”

In fact, Burns made a habit of putting opponents on their backs in 2014-15, finishing with a school single-season record for falls [37]. He said he finished his career second overall in the Newburgh record books with 92.

“I was looking for pins,” he said. “I wanted to dominate the best I could this year.”

He dominated quite a bit, adding his second All-State medal after taking third place at the Times Union Center at 132 pounds. For his efforts, he received a number of honors, including sharing the Senior Wrestler of the Year award in Section 9.

“There were so many strong wrestlers in our Section this year, so for me to get that award meant a lot,” he said.

Indeed, Burns has come a long way in the sport in a relatively short period of time. He started as a seventh grader after he decided “there was no future for a little guy like me in football or baseball”.

As a freshman, he put all other sports aside for good to focus on wrestling and it has no doubt paid dividends. And he feels that there’s a lot left for him to do on the mat – at SUNY Cortland, where he committed last week.

“I had a relationship with Coach [Brad] Bruhn there, he’s a really nice guy,” Burns said. “When I went for a visit, the guys on the team were phenomenal. They treated me like I was already on the team when I was up there. Cortland has a lot of success in Division III and I want to be a factor in their success in the future.”

Burns, who said he will compete at 133 or 141 pounds for the Red Dragons, was recruited by Division I and III schools and said his decision ultimately came down to Cortland and North Carolina State.

“I felt like a smaller school would be better for me,” he said. “Staying in state will be good in a lot of ways, including financially. You can get caught up at a big school and I think I’ll be able to keep my grades up and wrestle.”

Until it’s time to leave for Cortland, Burns said he has plenty to focus on.

“I’m still wrestling now,” he said. “A Friends of Section 9 wrestling club just started to help intensify competition and make our Section tougher. I’ll keep going there to work out with the young guys and I’ll compete too. I want to keep getting better because I want to try to start next year in college. And when I’m at Cortland, I want to be a national champion.”