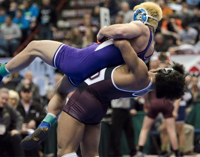 Courtesy of the Porter Family

“Wrestling is everything to us,” Shenendehowa senior Jesse Porter said. “It seems like our life is scheduled around it. That’s one reason our family has had success."

The Porter clan certainly has had a lot of success. According to Jesse, his father (Jesse Sr.) was an Olympic hopeful in Greco-Roman, his mother Melovee was nationally-ranked and older sister Alexis took fourth as a freshman for McKendree University this year at the Women's Collegiate Wrestling Association National Championships.

Jesse Porter has a strong resume as well, taking third and fourth at the NYS high school tournament the past two seasons and earning runner up honors at big national events in Greco Roman like the 2014 FILA Cadet Nationals and the 2013 Cadet Nationals at Fargo. He was also a Schoolboy National Champion.

And he plans to continue to pile up titles and victories in the international discipline as he committed to the U.S. Olympic Training Site program in Greco Roman at Northern Michigan a few days ago.

“The main reason I made my decision was that by going to a Division 1 college, I would kind of be giving up four years of focused training in Greco. Now, I can focus solely on Greco for four years and that’s the style I want to do.”

That’s not to say that he didn’t think about going the folkstyle route.

“I did give college wrestling thought,” he said. “I considered all of the academies and went through the process with West Point. I also talked to the coaches at NC State.”

But in the end, Porter’s connection to Greco and desire to accelerate his path in that style prevailed.

“I think it was predetermined by my whole entire family,” he said. “My dad is a Greco specialist and he knows so much about it. It made sense for me to go into, especially because I like it the most of the styles anyway. My dad is always there and knows so much that he can coach me even when I’m at home. I feel like it’s the style I can get furthest in because of my resources.”

Porter will also have plenty of resources at Northern Michigan, where he spent some time for a training camp.

“It was a really good experience,” he said. “I met all the coaches and worked with everybody there. I really liked the campus and the training facility and there’s a reputation of success.  I’ll be going back in April and I’m looking forward to it.”

Porter said he was also pleased with the academics there.

“I’ll be majoring in business management and I’m looking to do ROTC my last two years,” he said. “I’ve been looking into managing franchises in the fast food industry for a while and I’m excited to study to be able to do that in the future.”

But that’s down the road. Most recently, Porter was a double champion at the Mohawk Valley Wrestling Festival in Freestyle and Greco, a few weeks after finishing third at the NYS tournament in Albany at 152 pounds.  In the semifinals, Porter met Anthony Bell of Fairport. After regulation and multiple overtimes, the two were deadlocked, but in the ultimate tiebreaker, Bell earned the victory and the trip to the championship bout.

“From that point on, I was basically going off anger,” Porter said. “When I lose, I get really angry and I usually wind up dominating.”

Porter did bounce back effectively, winning by first period fall and by 8-3 decision to grab bronze. Now, after many of years, his folkstyle competition may be winding down.

“FloNationals might be my last folkstyle tournament,” he said. “I've been wrestling a long time. I was eight when I started. My dad always put me one weight class and one age group above. I got beaten up a lot. He would ask me if I wanted to quit. And I would say no – I want you to teach me. In that situation, a lot of kids would quit, but he encouraged me to keep going and that’s how I got better at the pee wee level.”

His family continues to help his improvement in other ways as well.

“There’s definitely a competition – a healthy competition – in our family,” he said. “Alexis is killing me right now – I don’t even know how many national titles she has. I have a lot of catching up to do. But that competition has helped me so much. And we have another sister, who is in modified right now. She’ll be coming up the ranks – we think she’ll be a Fargo National champion too.”

That’s one of the things on Porter’s list for 2015 – picking up Fargo gold.

“My short term goals are to try to make the FILA team in Las Vegas and if I do, go to Worlds,” he said. “I think the schedule might still work out for me to go to Fargo as well.”

To get there, Porter mentioned that a lot of workout partners have pushed him over the years.

“My dad’s really good and I’ve been training with him since I started wrestling,” he said. I’ve had good training at Shenendehowa and at Journeymen. Coach [Frank] Popolizio brings in guys from around the state and country. He does a really good job of that. He’s bringing over an Olympic champ from Italy, just so I can practice with him.”

In addition to those partners, Porter knows there are many wrestlers he will learn from over the next few years as he concentrates in Greco.

“At [Northern Michigan], there are so many guys who have placed at the Open that I can train with. I’ll also be able to cross train at the OTC with all the guys on the Olympic team. I’ll have a four-year jump on other people. I’m excited to get started on the wrestling I really want to do.”