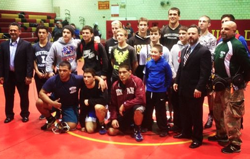 Team New York made sure the winning “streak” stopped at one.

In the first three years of the Pinning Down Autism All-State Duals, the Empire State squad came out on top against border rival New Jersey. But in 2014, the Garden State team was victorious.  New York got back in the win column on Saturday, however, picking up a 38-17 victory at Bergen Catholic High School.

“Even before the match started, I thought our team looked stronger on paper,” said NY coach Craig Vitagliano. “We thought we had the stronger team and the guys went out and got the win.”

Starting things off on the right foot for the Empire State was NYS fifth placer Kyle Mosher of South Side, earning a 3-1 victory over Kyle Kaiser.

“He’s an eighth grader who likes wrestling, likes technique and will get better and better as he gets bigger,” Vitagliano said. “He has the right attitude.”

In the next bout at 106 pounds, the home team saw Phil Ruiz major Justin Lopez of Yonkers, who took sixth at 99 this year.  So, New Jersey led 4-3, but that advantage was short-lived with three-time state champ Yianni Diakomihalis of Hilton up next for NY.

Diakomihalis was dominant, with a 16-1 technical fall over Anthony Rubinetti to put the Empire State ahead 8-4. The team would not trail again.

“What can you say about Yianni?” Vitagliano said. “The kid is incredible. The NJ kid tried to funk; tried to be defensive. But Yianni remained calm and cool under pressure and ended up with the tech. He’s one of the best wrestlers I’ve ever seen, and I’ve seen a lot of great wrestlers. It’s hard to believe he’s only a 10th grader.  And he’s a really nice kid too.”

Diakomihalis started a winning streak for New York, as Matt Seitz (Monsignor Farrell), James Szymanski (Shoreham-Wading River) and Sam Ward (Locust Valley) all earned decisions from 126 to 138 to increase the lead to 17-4.

“Seitz looked really good and got the win,” Vitagliano said. “Szymanski wrestled really well, really strong for us. Then, Ward had a great win over NJ runner up Connor Burkert, who had beaten him previously.  It was tied and then he had a gutsy snap and go behind with maybe a second left for the win. Sam’s usually a pretty basic wrestler, but he showed a little flash at the end.”

From 145 pounds (where there were two bouts) to 220, the teams traded victories.  Coming out on top for the New York squad were Lenny Merkin (145), Louie DePrez (160), David Hamil (182) and Youssif Hemida (220).  Merkin recently took third at the National Preps, while the latter three were all state champions in Albany a few weeks ago. Mike Raccioppi, Ralph Maio and Francisco Bisono also represented New York in the middleweights.

“Merkin beat a really, really tough kid – a NJ state runner up [Stephan Glasgow],” Vitagliano said. “His opponent was huge, but Lenny got the job done. He was losing and came back to win it – he showed a lot of heart.”

“DePrez is only a 10th grader but he’s a very good wrestler who will continue to get better,” Vitagliano said. “He’s another kid I’m excited to watch – tough, strong, good positioning.  Hamil had a great year for Deer Park, with his only loss to Christian Dietrich and he won a state title. He came out and got us a big win.”

After that win, Jeff Velez of New Jersey topped NY state champ Nathanael Rose at 195 to make the team score 26-17.  With the Garden State in striking distance, state champ Hemida quickly shut the door with a pin over NJ bronze medalist Scott Levelle. For his efforts, the Mamaroneck star and future Maryland Terrapin was named the event’s Outstanding Wrestler.

“Youssif is a great wrestler who uses his length to his advantage,” Vitagliano said. “He’s very coachable and I think he has a good future ahead of him. [Maryland head coach] Kerry McCoy is lucky.”

If one pin wasn’t enough, New York finished off with a bang as state runner up Edwin Rubio of John Glenn registered a fall at heavyweight to make the final tally, 38-17.

“Rubio is a tough kid, who pinned his opponent with a half nelson,” Vitagliano said.

So, Team New York got back on the winning side of the equation against New Jersey. But as Vitagliano and all the participants know, the event is about more than wrestling.

“Hats off to Jason Bross, Dan Kelly, Damion Logan and everyone else who worked on this event,” Vitagliano said. “It’s for a great cause. Some kids probably want to take time off after the state tournament and before Virginia Beach and Flo.  Some probably don’t want to cut weight. But you have to give credit to all the kids who were here – they competed for a great cause and for great competition. It’s just a great event that means a lot to a lot of people. I’m always honored to be involved.”

All proceeds from the event will be provided to Danny's Wish, an organization which gives iPads to kids with autism.

For match-by-match results, see below.

New York came out on top at the first three editions of the Pinning Down Autism All-Star Duals. But in 2014, Team New Jersey broke into the win column, earning a 39-22 victory at Baldwin High School on Long Island.

On Saturday, an Empire State squad full of accomplished wrestlers will take the mat at Bergen Catholic High School in New Jersey, looking to pick up another win in the border battle.  The team features five 2015 NYS champions, three more finalists and several additional placers. The gold medalists for NY are Yianni Diakomihalis of Hilton, Louie DePrez of Hilton, David Hamil of Deer Park, Nathanael Rose of Eagle Academy and Youssif Hemida of Mamaroneck.

Meanwhile, the Garden State group counters with 10 wrestlers who made the podium at the NJ State tournament.

As in previous years, the event is about much more than wrestling, as proceeds will go to help those impacted by autism.  Admission is a $20 donation.

Now, let's take a look at those who will take the mat, representing New York and New Jersey. (Note: there will be two matches at 145 pounds instead of a match at 113).

LINEUPS, AS PROVIDED ON FRIDAY MORNING (Subject to Change)