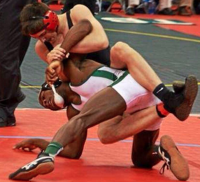 This past weekend, wrestling fans from all over flocked to Cornell to watch a number of events, including Kyle Dake’s return to the mat, the Big Red’s opening dual of the season and the New York State Intercollegiates.

Nationally-ranked Ben Darmstadt of Elyria High School in Ohio was one of those who traveled to Ithaca.  And before he left, Darmstadt, a student with a 4.4 GPA in Advanced Placement and Honors classes, gave Rob Koll and his staff a verbal commitment to become Cornell’s first recruit from the Class of 2016.

“The academics are amazing,” Darmstadt said. “That was very important to me. And the wrestling is also always in the top 10 in the country. The staff is really welcoming and a lot of fun. When I got down there and toured the campus, I knew it was the place for me.  I had such a great weekend – it was really cool watching Kyle Dake and the Oklahoma dual meet.  With the crowd and Red Man running around – it was such a great atmosphere.”

For Darmstadt, it was the latest of numerous visits to Ithaca.

“I never really toured the whole campus until last weekend, but I’ve gone there multiple times for camps,” he said. “I think the first time I went to Cornell was in eighth grade.”

He probably looked quite a bit different as an eighth grader than he does now. After all, he competed at 120 pounds as a freshman, went up to 152 as a sophomore and is planning to take the mat at 182 pounds this season as a junior in the Buckeye State.

The rapid movements up the weight classes haven’t derailed Darmstadt at all.  In fact, his success has continued as he’s advanced up the ladder.

After qualifying for the state tournament as a ninth grader, Darmstadt drew Jairod James, who later went on to finish second at the NHSCA Senior Nationals, in the first round of the Ohio championships in 2014.

“Everyone was picking me to lose that match,” Darmstadt said. “I used that as motivation to prove everyone wrong.”

He did just that, winning that bout 7-3 and his next two by major decision to make his way to the finals, where he dropped a decision to Casey Sparkman, currently a freshman on the Kent State team, to finish as an Ohio runner up at 152 as a sophomore.

“The goal is always to be a state champ and nothing less,” Darmstadt said.  “I missed a couple of things, but I’ll get it this year. I came up short, but I was right there.”

He proved that he was right there on the national scene as well, beginning at Fargo with the Cadet Freestyle championships in July.

Darmstadt took third place at the prestigious event at 160 pounds with a 6-1 mark.  And he was dominant in all of those victories, with two technical falls, three pins and a win by injury default.

“I really picked up my Freestyle this year,” he said. “In Freestyle, it’s so much easier to score points fast.  That’s how I like to wrestle in folkstyle too.”

He scored plenty of points at the Super 32 Challenge in North Carolina in the fall, opening with a pair of pins and finishing with three falls on his path to fourth place at yet another higher weight – 182 pounds. He split bouts with eventual bronze medalist Blake Rypel of Indiana, with his other setback coming against the #1 wrestler nationally, Zahid Valencia.

“I went in to Super 32 wanting to prove that I’m one of the best kids in the country,” he said.  “Taking fourth is never the goal, but I know what I need to work on. I wasn’t ranked before that and I showed I belong.”

Darmstadt expects to represent the Big Red at 197 pounds as he continues his ascent up the weights.

“I think the fact that I started out as a 120 pounder has been the biggest part of my success,” he said. “I still wrestle like a 120 pounder, with speed and technique and not just strength.  Technique is always better than just brute force.”

Darmstadt is impressed with the workout partners he will have at Cornell, including someone he’s quite familiar with – the nation’s #1 184-pounder, Gabe Dean.

“I’ve actually known the Dean family for a long time,” he said. “Gabe has developed so much in college – he’s really turned into a monster.”

Darmstadt hopes to do the same when he wears the Cornell singlet.  That’s a few years away, although he does have plans to visit Ithaca again in the interim.

“I’ll go up to Cornell this summer and train for Fargo because I’m looking to be a Fargo champ too,” he said. “I’m really excited about my decision, but I’m looking at my next goal -- Ironman in the next couple of weeks, and then a state championship.”

Ben Darmstadt wanted to thank his coaches Erik Burnett and Jack Gillespie “for helping me get to where I am today. I couldn’t have done it without them.”