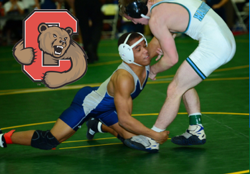 As a freshman at Blair Academy, Chaz Tucker had mono early in the season and after his return, he suffered a leg injury that forced him to wrestle a way he never had before.

Despite those difficulties, he made it to the title bout of the National Preps at 113 pounds.

“I was leading lefty instead of righty, which was a bit of a challenge,” he said. “Making it to the finals wrestling in a different way and helping Blair win the title was really cool.  I never thought I’d be in that position in the first place – starting as a freshman at Blair.”

Expectations have certainly changed. Now, as he heads into his senior campaign, Tucker is well known to high school wrestling fans around the country. According to the Associated Wrestling Press, Tucker is the #2 wrestler in the land at 126 pounds and the #23 grappler in the Class of 2015 nationally.

Not surprisingly, Tucker was heavily recruited by college coaches. The stellar student considered a number of the top academic institutions in the country, including Columbia, Cornell, Duke, Harvard, Princeton, Virginia and West Point.

And late this week, Tucker made his decision, informing New York Wrestling News that he committed to Cornell after narrowing his decision down to the Big Red and Harvard.

“I chose Cornell because of the awesome wrestling program and because I really like the engineering department,” Tucker said.

After all, engineering seems to be in his blood.  He said his father (mechanical), mother (environmental) and sister (biomedical) are all in the engineering fields.

But beyond the academic sphere, Tucker said a lot of other things stood out to him on his visit to the Ivy League campus.

“When I went there, I had a really good feeling,” he said. “The people I’ll be surrounding myself with are really successful people and I feel like I can feed off their vibe and be successful myself.  It’s a great environment. The team is really close – a tight knit community. It’s basically a family. Knowing that I’ll be part of that when I get to Cornell is an awesome feeling that made a big difference.  I like that everyone has their niche – everyone is a big part of the team whether they’re a starter or not. And the training and resources are amazing.”

When he gets to Ithaca, Tucker said he plans to be a 133 pounder.

There have been a number of Blair wrestlers on the Big Red squad in recent years.  In fact, the current roster includes three former Buccaneers, including sophomore Mark Grey, who was a teammate of Tucker a few years ago.

“Mark was a senior when I was a freshman,” Tucker said. “He was an awesome leader – probably the best senior captain I’ve had at Blair Academy.”

Tucker has taken on leadership roles as well, including being a prefect at one of the freshmen dorms on campus.  He also provides an example to follow on the mat.

Tucker said he felt a shift of momentum in his wrestling at the Escape the Rock tournament during his junior season.

“I finally beat my rival Brent Fleetwood [now at Central Michigan] there – it was a really big match for me,” Tucker said. “He had kept me from a Beast [of the East] title; an Ironman title. Beating him was big for me. I then beat Scott Parker [now a starter at Lehigh] and it really helped me see how good I could be.”

He kept the momentum going this summer at the Junior National Freestyle Duals for Team New Jersey.  Tucker went 7-0, including a victory over Oklahoma State recruit Kaid Brock, who currently sits atop some of the national polls.

“It was a great environment – wrestling Team Oklahoma in Oklahoma. They had a good group of fans,” he said. “Wrestling for Blair, I’m pretty used to hostile environments. The dual wasn’t going our way and I was just trying to make the crowd quiet again and change the tide.”

Team New Jersey lost that meet 33-30 in the semifinals and went on to take fourth place.  Tucker was a huge contributor, also defeating nationally-ranked Lincoln Olson twice as well as Fargo Greco champion Taylor Lamont.  However, he felt there was another level he could reach.

“I had only trained for about a week and a half before the Duals because before that I was back home in Massachusetts where the nearest club is 45 minutes away,” he said. “I had about two and a half weeks of training with Coach [Jeff] Buxton before Fargo with great partners like Joey McKenna, David McFadden, Jordan Kutler and Peter Lipari. I knew Coach Buxton and those partners could get me ready – I give them a lot of credit. The extra time really made a difference.  I was attacking, creating angles, scoring a lot of points. I felt like I was a lot better.”

It certainly looked that way.  At Fargo, Tucker recorded technical falls in his first five bouts, outscoring his foes 52-0, to earn a spot in the finals against Minnesota’s Mitchell McKee.

He took an early 4-0 advantage in a back and forth affair that was knotted at 8 late in the final period.  However, McKee scored the decisive points to win 10-8.

“I was up early and then I stopped wrestling,” Tucker said. “He’s really good and he deserved that match. He outwrestled me at the end. When I look back at it, it wasn’t my best shot.  If I do get to wrestle him again, I’ll give him a better match. But he deserved that one.”

Tucker said he walked away from his silver showing at Fargo with “mixed feelings.”

“It was good to know that I have the capability to be the best,” he said. “Years earlier, I didn’t have that kind of confidence. My wrestling was there, but not my confidence. This summer really helped me see that I can be on top. That’s what really changed for me. Second place drives me to get better – mentally, physically, in my conditioning and technique-wise.”

So, the wrestler who didn’t expect to start for Blair just a few years ago is now recognized as one of the nation’s best.  And he’s on his way to the Ivy League where he’ll compete for one of the country’s top wrestling programs.

“A few years ago, I probably wouldn’t have believed it,” he said. “Coach [Brian] Antonelli made me write down my goals for the season and I’m looking to be undefeated and dominant. I’m really looking to take a step up in my wrestling.  Then after that, I’m just really excited about Cornell.”