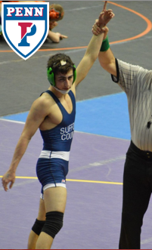 Tristin DeVincenzo went into the state tournament last season knowing that he would reach a milestone with his next victory.

However, in his opener in Albany, he dropped a 4-3 decision, putting him into the wrestlebacks where another loss would require him to wait until his senior season to earn his 100th career win.

“I came out and had a bad match in the first round,” DeVincenzo said. “But I was able to bounce back in front of my family and get that 100th career win and that motivated me to do more.”

He reached the century mark with his 10-8 triumph over Pleasantville’s Stephen Paternostro and didn’t stop there, capturing three straight bouts to secure All-State honors.  DeVincenzo then ended his first appearance in the state capital on a high note, defeating Salem’s Dan Vandyk, 5-2, in his final bout to earn fifth at 126 pounds.

“I’m definitely happy I won my last match,” he said. “In my eyes, taking fifth after all is said and done feels much better than sixth.”

It wasn’t the first time DeVincenzo bounced back from an opening round setback during his 39-4 junior campaign.

The Suffolk County standout did the same at the Eastern States Classic in January, winning four consecutive contests in the consolations to make the Round of 12 in a weight that included three nationally-ranked grapplers and in which four eventual NYS placers didn’t make the podium.

“I lost my first round match in probably the best bracket in the tournament and I knew I had a long way back,” he said. “I fell short in the match to place, but coming up short just motivated me.”

His efforts attracted the attention of college coaches and last week, DeVincenzo made a verbal commitment to the University of Pennsylvania, where he said he expects to spend most of his career at 141 pounds.

“Penn is such a great school,” he said. “I loved the team – it was a great group of guys and it’s a place with great wrestling history that’s pretty close to home. I’ll be getting an Ivy League education and could see myself being pretty set for life with a degree from Penn.”

DeVincenzo said he took visits to Pittsburgh and Davidson before making a trip to Philadelphia in late October.

“On my official visit, I fell in love with everything,” he said. “It’s the best of both worlds – a city environment but with the campus feel. Penn had always been my top school, but going on the visit really solidified it. As far as wrestling goes, going there sets me up to be successful as a wrestler and achieve the goals I have.  One of my goals is to be an All-American. The coaches there have done that and I know they can help me follow in their footsteps.”

While the goal of collecting NCAA medals is in the back of his mind, DeVincenzo has his sights set on the podium in Albany first.  Last year, he was joined on the medal stand at the Times Union Center by his younger brother, Matteo, the Division 2 state champion at 106 pounds.

“It was great being able to see him be so successful,” Tristin DeVincenzo said about his brother's title run. “I couldn’t have been happier to see him win it. This year was the first year we decided to be practice partners.  We realized how similar our goals were and we do a lot of the same things; we wrestle the same style.  It made drilling and getting better a lot easier. I have some weight on him, but we make the most of it and always come out of practice everyday with a great workout.”

In addition to training with his brother, Tristin DeVincenzo said he also has continued to get better because of the efforts of Port Jefferson coach Mike Maletta and club coaches such as Steve Hromada, Mike Patrovich and Matt Ross.

“I’ve been competing at a lot of high level tournaments,” he said. “This offseason I’ve really started to focus on specific positions I’m good at and getting better at the things I do in the matches. I’m definitely looking beyond just placing this year.  I’ve been training hard to win a state title.  I know that winning a title is within my reach and I’ll do whatever it takes to make it happen.”