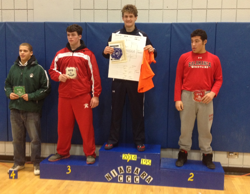 2014 NYS qualifier and Section VI champ Tyler Hall of East Aurora has committed to the University of Pennsylvania. Hall will wrestle at 285 pounds for the Quakers and study pre-med.

“I am really excited for the opportunities that await Tyler at Penn," his mother Erica Hall said. "He has worked so hard on the mat and in the classroom and I am happy to see it paying off.”

Tyler has always been a hard worker, but it was at the end of his freshman season at East Aurora when he kicked it into overdrive. He failed to make state qualifiers and wanted to make sure that never happened again. Since then, he has practiced and competed year round and the results speak for themselves. He is a two-time Class B champion, Section 6 champion, 2x Fargo qualifier and will be entering his senior year ranked in the top 5 in New York at 220 pounds.

“I have been coaching Tyler since he was in seventh grade," said East Aurora coach John Mion. "He has always talked about wrestling in the Ivy League. I always preach to my wrestlers to set goals and do whatever it takes to accomplish those goals. Tyler has done that. He dedicated himself to becoming a top tier wrestler while still exceeding in the classroom. I could not be more proud of Tyler."

Since becoming a state representative and qualifying for Fargo a second time, Tyler started gaining interest from several schools. He narrowed down his search to three: Penn, Air Force and the University at Buffalo. After making his official visits, he chose Penn because, as he said, "I saw it as the best opportunity for athletics and academics and believe that it will set me up for a successful life in the future.”

Mark Hall, Tyler’s father, coach and former University at Buffalo wrestler, had this to say about his son.

"It’s been a real joy coaching Tyler. I wrestled in college and had always hoped Tyler would too. This last year Tyler has improved a great deal and he started seeing interest from college coaches. I hoped he would choose a school where he could maximize his academic potential. The Penn coaches reached out to Tyler and we were immediately impressed. As one of the top schools in the country, we couldn’t be more proud of his choice.”

As exciting as it is for Tyler to have made this decision, he's thinking about the upcoming season now.

“I can’t think about going off to college yet," he said. "I still have goals to reach this year.”

East Aurora Wrestling, the community and his family wish him all the best on his quest for a state title this year and athletic and academic success at Penn!