Mamaroneck to Maryland: All-American Youssif Hemida Commits to the Terps 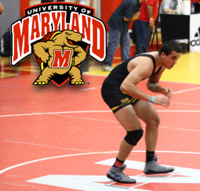 It isn't too often that a 13th seed wins a Section championship.

He arrived at the Section 1 state qualifier with a perfect record, although he had only wrestled four bouts prior to the event after returning to the mat from a neck injury.  He had shown glimpses of what he could do in the summer of 2013, earning All-America honors at Fargo in Cadet Freestyle.

At the Section 1 tournament, he demonstrated that form again, defeating the first, second, fourth and fifth seeds, including returning state qualifier (and eventual 2014 placer) John Hartnett of Tappan Zee, to win the 220-pound title and a bid to Albany.

"When he got back last year, he really couldn't shoot yet," Iowa Style Wrestling coach John Degl said. "He wasn't at full strength after being in a brace for months.  He basically won Sectionals without shooting.  He didn't just rehab - he developed around the situation.  He had to find new ways to win."

While Hemida came up one victory short of the podium at the Times Union Center, he hasn't missed the medal stand since, taking seventh at the NHSCA Nationals in Virginia Beach, followed by a second place showing at the FloNationals (both at 220 pounds).

"At the NHSCAs, he lost two matches on pure mental errors," Degl said. "But he quickly fixed those - he's a smart kid who knows how to win matches.  He's much more polished now."

That wasn't all.  Hemida once again excelled at Fargo, capturing All-America accolades for the second consecutive year after nabbing fifth in Junior Freestyle after a 5-2 showing with three technical falls.

However, in recent weeks, the Section 1 star was able to move closer and closer to a decision.

"I narrowed down [the list] due to three major factors which were the academics, the offer/cost, and the wrestling. The schools were Minnesota, Pittsburgh, and Maryland. It was definitely a tough decision, but I happily committed [Sunday] to the University of Maryland."

With a plan for the fall of 2015 now in place, the future Terp 285-pounder is now focused on his final high school campaign, where he looks to dominate - from start to finish.

"Youssif has a great shot at winning a state title,” said Degl, adding that Hemida will likely wrestle at heavyweight in 2014-15. “He’s so much better than he was last year.  He spent the whole year training, went to lots of camps and worked out with guys like [NCAA champion] Nick Gwiazdowski.  He’s even more dedicated than in the past.  His injury made him develop more aspects to his wrestling. Instead of shooting his double leg and possibly jamming his neck, he learned to create more angles, go upper body more. He developed a Russian series, an underhook series and got better on top. Colleges are always looking for big and strong guys who can move - that's Youssif."

Hemida's twitter says, "With hard work and a dream, anything is possible."  The phrase seems more than appropriate for a wrestler who has gone from the 13th seed in his Section to 12th in the current national rankings at 285 -- with a future in the Big 10.