The Next Bull In: Massena's Nolan Terrance Commits to Buffalo 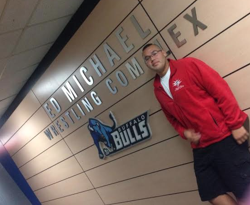 As previously mentioned in last week's Section 10 Preview, Massena heavyweight Nolan Terrance is looking to make a run at a state title this year.

Now, there will be less stress on him as he has committed to wrestle for Coach John Stutzman and the Buffalo Bulls.

Over the weekend, Terrance visited two of his top choices, the University at Buffalo on Sunday and Edinboro on Monday.

“After we visited UB, we loved it. The program is so young and full of energy. They are in a good transition and I think it's a great fit for him. I loved the coaches - they totally sold themselves!” said Terrance’s mom, who went along on the visit.

Terrance has had experience with Coach Stutzman in his corner the last two summers at Fargo.

At 6-foot-4 and 285 pounds, not only did Nolan have wrestling on his mind for college, but football too. He’s a two-sport athlete playing football for the Massena Red Raiders and he's also in an offseason league.

However, with the focus solely on wrestling from here on out, you can expect big things from him next year as one of only four returning qualifiers from the 285-pound bracket at the 2014 Division 1 state tournament.