Joins Teammate Rifanburg with the Bearcats 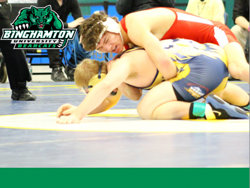 Norwich state champions Frank Garcia and Tristan Rifanburg have been wrestling together for years.  And even after they graduate from high school this spring, that won't change.

A few weeks ago, Rifanburg gave his verbal pledge to Binghamton University.

After narrowing his choices to Binghamton and the University at Buffalo, Garcia gave his commitment to the Bearcats late last week.

“It’s really good academic school that will help set me up for the rest of my life,” Garcia said. “After my official visit, [Binghamton] won me over.  The academics are really good and I really got along with the coaches and the kids on the team.  That’s such an important part – you spend so much time with your coaches and teammates, you have to like the people you’ll be with.”

Garcia said there are certainly a lot of familiar faces at Binghamton.

“There are many top New York wrestlers from throughout my high school career there,” Garcia said. “Guys like Nick Kelly, Nick Tighe – wrestlers well known around the state.  I’ve gotten to know them over the years and I felt really comfortable.”

Of course, having his close friend Rifanburg on board was part of the equation as well.

“It definitely was a factor,” Garcia said. “We’ve been training together since we were little kids, all the way through high school.  Now, we’ll be roommates in college.  Not too many people have a chance like that.”

He’ll get that chance in the EIWA, where he said he will likely wrestle at 149 pounds.

Garcia has done plenty of damage in the middleweights for Norwich, making the Round of 8 as a freshman at the state tournament before finishing second at 145 pounds as a 10th grader.  That same year, Rifanburg also picked up silver at the Times Union Center.

Those runner up showings fueled the fire for both.

“Taking second – it isn’t ever fun losing,” Garcia said. “I definitely trained harder and smarter after that.  Tristan and I, we drilled and drilled until everything was smooth. The state finals match [in 2013] made me more comfortable in tight situations and I stopped being passive. I realized that if I opened up, I could beat anyone.”

He came back as a junior and competed that way, compiling a 47-2 mark (with 35 bonus wins) on his way to the 152-pound state championship.  His victory in the finals over Tyler Silverthorn came just a few minutes after Rifanburg locked up his second NYS gold medal to give Norwich two state titlewinners in the same season for the first time.

While Garcia looks forward to wearing the Purple Tornado singlet again, he's currently suiting up for another team at his school.

“I’m doing cross country to stay in shape,” he said. “My coach [Terry Hagenbuch] was into triathlons so he inspired me to run. I don’t do 12 months of wrestling a year, but I always love to get back on the mat.”

While practice hasn't begun yet, Garcia has set a number of goals for his senior year.

“I’m looking to win Eastern States and beat a few of the kids in New York who are ahead of me in the national rankings," he said. [Garcia is ranked #15 at 152 by FloWrestling]. “I want to finish by winning states and going undefeated.”

If he does that, there could be history made at Norwich again, led by a duo who have wrestled together in the past and will continue to do so for Binghamton in the future.