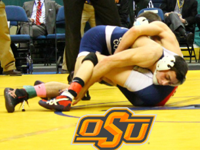 New York Wrestling News caught up with Ward Melville superstar Nick Piccininni to hear more about his decision to attend Oklahoma State beginning in the fall of 2015.

Nick Piccininni (NP): I felt like it was the best fit for me overall – the school and the wrestling team.  You can’t get a better lightweight coach than John Smith and the style of wrestling fits well with what I like to do.  I think it will be easy for me to transition there.

NYWN: When did you know that Oklahoma State was your choice?

NYWN: Did you take any other visits?

NP: No, just those two officials.  I considered Penn State earlier in the process.

NYWN: Ohio State coach Tom Ryan is from Long Island.  Did you know him prior to the recruiting process?

NP: I’ve known Coach Ryan probably since I was seven years old. I grew up wrestling for Hauppauge with his son, Jake Ryan, who’s on the team at Ohio State now.  I’ve known them for a long time. It was really, really tough to [let him know about the decision].

NYWN: Oklahoma State has a great recruiting class coming in with you, including a number of standout lightweights.  Did you get to meet some of them on your trip?

NP: When I visited, there was only one other recruit there, Lincoln Olson. The trip was awesome. I knew a bunch of the guys before - Alex Dieringer, Mike Magaldo, Chance Marstellar and Chris Koo from Long Island.  I’m really excited about the recruiting class I’m part of.  The guys are all really skilled and it will be awesome to have some of the best come in and be able to work with them for five years.  We’ll hopefully put together some national title runs and be really, really good as a team.  I’m pumped thinking about it.

NYWN: Who are you excited to train with?

NYWN: What weight do you see yourself going in college?

NYWN: Have you talked at all about redshirting vs. wrestling right away?

NYWN: What’s next for you?

I’ll be at the Journeymen Classic and I’m going back to the Super 32.  I’m going there to win it.  I have to win it.  It’s one of the things I haven’t won yet and it’s been on my mind all year.  I’ve been working for it and I’m ready.

NP: I definitely think about it.  I get excited about things like that.  But I want to try to take one match at a time, one tournament at a time.  When the time comes and leagues and counties get here, I’ll worry about that.  I’m trying to not think about it right now.

NYWN: Are you going to bring your pink socks with you to Oklahoma State? [Piccininni wears pink socks in support of breast cancer awareness. His mother is a survivor].

I’ll definitely try.  It’s supporting a good cause and I’d like to keep doing it.  But I don’t know if there are NCAA rules that would stop me from doing it.

NYWN: Did you get to celebrate making your decision at all?

No, not really.  I had strength training and then wrestling practice after school [on Monday]. I’m really excited but it’s not time to celebrate yet.  I’ll celebrate after I win four national titles. 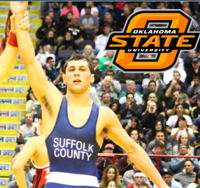 As of mid-September, Ward Melville's Nick Piccininni was one of the top uncommitted recruits in the country.

Piccininni has dominated competition in the Empire State over the years, with three straight undefeated state championship seasons (at 106, 113 and 120).  As an eighth grader, he nabbed third place at the NYS tournament (at 96 pounds).

He also has made quite an impact on the national stage.  In the past year, he notched fourth at the Super 32 Challenge and captured the title at the FloNationals, majoring Luke Pletcher of Pennsylvania in the finals.  That performance boosted him to the #1 ranking in the country and he still sits in the top spot.

Ward Melville coach Bill DeSario certainly believes Piccininni, a future 125 or 133 pounder for the Cowboys, has what it takes to succeed at the next level.

"One of [Nick's] best attributes that sets him apart from others is his ability to raise the level of his intensity on the mat as his competition gets better.  He thrives on this high level of competition."