Rose was an All-American in 2014 at Fargo, Va Beach 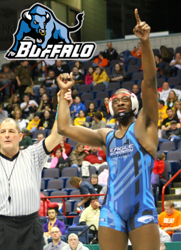 That’s what Eagle Academy’s Nathanael Rose said went through his mind right after he captured the 195-pound Division 2 state championship last year in his third appearance at the Times Union Center.

The senior upperweight made his debut at the NYS tournament as freshman at 182 pounds and then, as a 10th grader, fell just one win short of making the podium.  That left a bitter taste.

“Losing in the match to place, that got me really upset,” Rose said. “I was tired of losing. I told my coaches I wanted to be a state champion and I put in the work. The hard work paid off.”

It certainly did.  Following a 32-3 regular season, Rose came to Albany and was in command throughout the weekend.  He recorded a pair of major decisions and outscored his four opponents by a combined 40-9 on his path to gold.

And while Rose felt that the journey to the top of the podium was a long one, he still is a relative newcomer to the sport.  He said he began wrestling in eighth grade.

“I didn’t like any other sports,” Rose said. “Wrestling is physical and that was the right thing for me.  I worked at my school and with a really good organization, Beat the Streets.  I was picking things up pretty quick and was doing well, so I figured why not continue?”

This weekend, he guaranteed that he will continue longer in the sport when he committed to the University at Buffalo, where he expects to compete at 197 pounds for the Bulls.

Rose, who said he also spoke with Maryland, Hofstra, Nebraska and Arizona State, took his official visit to the campus this weekend and gave his verbal pledge to head coach John Stutzman and the Buffalo staff.

“It was a good atmosphere,” Rose said. “I know a lot of the wrestlers from tournaments and trips like Fargo.  That’s something I definitely liked – knowing some of the people and what they’re about.  What really caught my attention is that I’m not just there to wrestle - the coaches emphasize the academics.  I feel like there’s a good plan for me to succeed in academics and in wrestling at Buffalo.”

What success in wrestling means to Rose has changed over the years. Now that he’s a state champion, he said he has his sights on something else.

“After a while, the state title didn’t feel that great anymore,” he said. “Now, I want to go even bigger – a national title. In the long run, I really want to be an Olympic champion. There’s always another level.  I want to win that national title.”

He showed this offseason that he’s competitive on the national stage.

In the spring, he earned All-America status at the NHSCA Nationals in Virginia Beach and then represented the third place squad (New York Kong) at 195 pounds at the prestigious Disney Duals, along with a number of the Empire State’s top wrestlers.

And then, in July, he nabbed eighth in one of the country’s premier events, the Junior National Freestyle championships at Fargo.

With all those victories and All-America accolades, Rose wasn’t satisfied.

“Fargo was probably the toughest event,” he said. [Rose lost in the first round to eventual fourth-placer Joel Dixon of Oklahoma before winning six straight in the wrestlebacks]. “I wasn’t happy with the way I wrestled there. The way I placed was based on defense.  Imagine if I actually took shots. I feel like I didn’t work hard enough on Freestyle before.”

Not many would accuse him of not working hard enough. Rose said he hasn’t stopped training since the end of the high school campaign and doesn’t plan to do so.  As a result, he feels that this scholastic campaign will end like the last one.

“My goals are not finished,” he said. “I’m committed to wrestling and I don’t want any breaks unless I’m injured. I’m proud of being the second PSAL state champion, and I want to be the first PSAL wrestler to win two [state titles].  I think about that, but I’m not worried about it.  If I train hard enough to win nationals, I feel like there’s no way I should lose at states.  I feel confident that I will be a two-time state champ when this season is over.”

Nathanael Rose wanted to thank his coaches. “All I know is that the coaches I have are the best in the world,” he said. “John McGarry and Ryan Cooley really push me and help me succeed.”