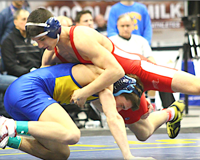 As the summer winds down, New York Wrestling News caught up with four-time state finalist and two-time champion Tristan Rifanburg of Norwich.  A winner in 2013 at the NUWAY Southwest Kickoff Classic, aka “The Freak Show”, Rifanburg looks forward to kicking off his senior campaign.

This article is from August 25.

New York Wrestling News (NYWN) Back in 2010, you were Norwich’s first state champion – and you did it as a seventh grader.  Last year, Norwich had a pair of champs.  What was it like for your school to have both you and [152-pounder] Frank Garcia win it all?

Tristan Rifanburg (TR): We’re best friends and we do everything together.  When he trains, I train and the other way around.  It’s been that way since sixth or seventh grade.  It was great to both win state titles last year.  The year before, we both came in second and were devastated.  We told each other that day that we’d come back and win it and we did.

Going into last year’s state tournament, you had just one loss as a junior – to Locust Valley’s Sam Ward at the Eastern States. Were you excited to see that you were on the same side of the bracket and could get a rematch? [Rifanburg won their meeting at the state tournament, 5-0].

TR: I was excited to wrestle him again. I felt like I knew what I had to do the second time around.  But if you want to win, you have to beat everyone in the bracket anyway, so it didn’t matter to me if it was in the semifinals or finals.  I was more excited that I was the third seed.  In seventh grade I won my first state title from the third seed and I feel like it’s my lucky spot.  When they put me there again, I was happy about that.

You started your varsity wrestling at 96 pounds.  You won it all at 138 last year. Do you see yourself moving up again this year?

The college recruiting period has been underway for almost two months. Where are you in that process?

TR: I’m looking close to home.  Honestly, I’m close with my family and want them to be able to watch me wrestle.  It’s a family sport for us.  I'll be taking an official visit to Binghamton -  I really like it there. [Update: Rifanburg's commitment to Binghamton has been reported since the article was first published on August 25].

What was July 1 or those first few days of the recruiting period like for you?

TR: You always dream of having multiple colleges calling you. It’s interesting and fun, but when it comes down to it, it’s a process for the whole family.  You have to weigh all the aspects – the team, the coaches, the education, the campus.  It’s fun but stressful too.

What weight do you see yourself going at the college level?

TR: I’m not sure.  It could be 149 or 157 or maybe even bigger. I’m still smaller than both of my parents. I have a big frame and could definitely put on some weight.  I’ve never done a regimented schedule of lifting in my whole life so when I start that, I don’t know how big I’ll get.

Last year, you won the NUWAY Southwest Kickoff Classic (the Freak Show) in Las Vegas in the preseason.  Your bracket had four 2014 California state placers, however, you outscored the competition 36-2 in five bouts.  Tell us about that experience.

TR: It was a lot of fun.  I didn’t know anyone in the bracket; I actually didn’t even check the names. I just looked at the bout number and the mat number, put the anklet on and wrestled.  I didn’t worry about anything.  Not knowing the guys, I came out like it was the state finals in every match.  I think it benefitted me – I didn’t overestimate or underestimate anyone because I didn’t know if they were the best in the country or the worst.  There were some really, really tough kids there –it was a good time and a really good experience.

Are you planning to compete at any big preseason events?

TR: I’m planning to go back [to the Freak Show].  But other than that, I don’t have any big tournaments scheduled. That could change. I’m just training; practicing a couple days a week.

Have you taken a break since the end of the high school season?

TR: I never have really wrestled year round.  I like to take my break in the spring and get back at it in the late summer, early fall.  It works better for me – it keeps me hungrier and fresher.  I usually do MAWAs in Maryland and went down to Virginia Beach a few times, but after that, I put the shoes away for a month or two.  I may practice here and there to stay fresh, but I like to stay away a little bit and make sure my head is right for the next season.

So what keeps you busy during those times?

TR: I rode motocross until I was 15 – racing dirt bikes.  That’s what I did all spring and summer.  It was a nice getaway from wrestling.  Now that I’m older, I smash derby cars – demolition derby.

NYWN: The season is fast approaching. Is it hard to believe that you’re going into your sixth and final season of varsity wrestling for Norwich?

TR: It’s crazy.  I never thought it would come, but it’s here.  The goal is to go undefeated and have that perfect season I’ve never had.  I’ve won states [twice, with four appearances in the finals], but I want to be have that good, healthy, undefeated senior year.