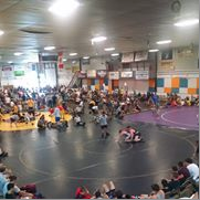 This past weekend, Clayton, N.Y. was home to one of the Northeast’s biggest summer tournaments (now in its 13th year) - the 1000 Islands Duals.  Just a half mile from the St. Lawrence River, it's a perfect place to enjoy a summer wrestling tournament; a tournament that has grown over time.

The event went from 22 varsity teams and seven junior high squads in 2002 to a loaded 48 varsity teams (from six states) and 20 junior high squads this year. While 108 different teams from 10 states have taken part over the past 13 years, there are six groups that have attended every year since 2002 - Suburban Council (Colonie), Fulton, Gouverneur, South Jefferson, Wayne and Nazareth (PA).

After winning the Northeast Duals and Cape Cod Duals last month, the Superior Wrestling Academy wrestlers added another title to their resume with a dominant 4-0 performance in the junior high division.  Superior breezed to the finals with wins over Mat Power W.C (65-6), Cellar Dwellars (51-6) and Apex W.C (56-18).

On the other side of the bracket was a very tough Nazareth team from Pennsylvania, which started out the tournament with a win over Wayne, 54-3. Nazareth continued an impressive run with a quarterfinal win over Delaware Valley (NJ) and semifinal victory over Tiger Elite, 31-18.

That brought about a rematch of the 2012 finals between Superior and Nazareth, in which Myles Griffin and Ethan Ferro picked up pins to lead Superior to a 37-22 win and a third straight 1000 Islands Duals title.

In addition, Drew Schafer, Devin Rivet, Alec Sampson, Jake Cook, Seth Padelford and Tyler Barnes all won for Superior in the championship dual.  The team was coached by Ed Schafer and Gary Ferro.

For the box score from the title match, see below.

Myles Griffin, Ethan Ferro, Drew Schafer, Devin Rivet, Alec Sampson, Tyler Barnes and Seth Padelford were all undefeated during the weekend.  Ian McKenna was also unbeaten at 112 before an injury prevented him from competing in the title match. Jake Cook, Brock Delsignore and Michael Gonyea all went 3-1. 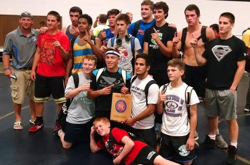 It became clear after the first few rounds of the high school tournament that Buffalo Wrestling Club and Doughboy WC (I) were on a collision course for a rematch of last year’s finals.

Buffalo opened the tournament by shutting out Indian River 64-0 and kept the momentum rolling with a 52-13 victory over Suburban Council (Section 2) and a dominant 52-3 win over powerhouse Mt. Anthony (VT).  A western New York battle then occurred in the semis with Buffalo WC upending Tiger Elite WC (Section 5), 46-15.

On the other side of the bracket, Doughboy, the defending champs, also started with a shutout win -- over Titan White (Section 5), 73-0. The star-studded Massachusetts team then defeated Section 3’s Team Proper-ly Trained, 34-12, Delaware Valley (NJ), 63-0, and Team Tim Tyler (Section 3), 53-9.

Doughboy's semifinal contest was a little closer, with a back and forth battle against Phillipsburg (NJ), 31-21.

In the title match, Buffalo picked up the momentum early, winning five of the first six with a tech fall from AJ Burkhart (Waverly) and decisions from Ryan Burns (Clarence) and state champions Dane Heberlein (Alexander) and Kellen Devlin (Amherst) before All-State wrestler Cody McGregor (Tonawanda) followed with a big pin to pull the lead to 20-3.

Doughboy fought back with wins from 145 pounds through 173, including a pin to bring the score to 20-18.  However, Buffalo’s upperweights came up big with state placer Howie Nolan (Maple Grove) and Richie Jones (St. Joseph's Collegiate) earning close decisions before Tyler Hall (East Aurora) sealed the match with a pin at 220.  Doughboy’s heavyweight picked up a tech fall but it wasn’t enough as Buffalo won the title.

Who will be the team to try to step up and knock off Buffalo WC next year?