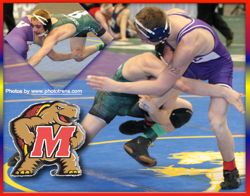 Locust Valley’s three-time state placer Nick Casella began touring colleges after the season, including Brown. And he planned trips to Central Michigan and Arizona State.  But racking up more miles on the road won’t be necessary now.

Not after Casella spent time in College Park, Maryland a few weeks ago.

“When I visited, it was spectacular,”  Casella said. “The coaches were so nice and everything about it was just great.  The fact that they’re going to the Big 10 made it even better.”

It didn’t take too long after returning home for Casella to make his decision official, as he gave a verbal commitment to head coach Kerry McCoy and the Terps last week.

That made Casella the second Locust Valley wrestler to pledge to a Division I program – before the recruiting period officially begins on July 1.

The Falcons have emerged as a powerhouse in Division 2, sending seven wrestlers to the state tournament in 2013 before capturing the small school team state championship this year.

“We talked about winning as a team a lot before the season,” Casella said. “We kept talking about it, saying we could do this. It pumped us up so much.  It was amazing when we got that team state title.  We feel like we’ll do it again.”

Casella remembers when his outlook on the NYS tournament was a bit different.  Back in 2012, when he was a freshman, Casella entered the Times Union Center at 99 pounds without a lot of fanfare.

“There were no expectations that year; it was just go out there and wrestle,” he said. “It was really cool to be there for the first time, but it was nerve wracking, especially in the finals.”

The unseeded Casella went all the way to the title bout, where he was edged by Lyndonville’s Tony Recco, 1-0.  On his path, he beat 2013 state champion Luis Weierbach and top seeded Joe Nelson.

The next year was similar as Casella put together an impressive 39-4 campaign at 113 in which he took seventh place at the Eastern States Classic, with his setbacks at SUNY Sullivan against 2013 state finalist Cheick Ndiaye and multi-time NYS placer Dillon Stowell of Gouverneur.

He’d see both again in Albany, beginning with a 7-4 semifinals victory over the top-seeded Ndiaye to earn a spot against Stowell in the championship match.  Their bout at the Eastern States wasn't close, but this one came down to the wire.

“I was used to wrestling [at the state tournament] the second time,” Casella said. “I had wrestled [Stowell] before.  He pinned me the first time and beat me 11-0 at Eastern States. The state finals was a great match – it came down to the last few seconds where I was losing by one and he countered my shot [in a 6-3 Stowell win].”

So, after collecting his second consecutive silver medal in New York, he hit the national scene, placing at the NHSCA Nationals in Virginia Beach and entering the Cadet Freestyle and Greco National Championships in Fargo with a lot of confidence.

In the 120-pound Greco bracket, Casella started strong, winning his first six bouts, including five by pin or technical fall.  After dropping his next two matches, he earned a spot in the seventh place contest against Idaho’s Raul Nevarez.

The atmosphere brought back the feelings Casella experienced in his first trip to Albany.

“They turn off the lights, with one giant light pointing to your mat,” he said. “It was an awesome experience. Very nerve wracking but great at the same time. It was probably my most memorable win of my career.”

That could be because he trailed nearly the entire first period – until he made a big move.  The referee signaled a pin for Casella, but after a long review, the call was not confirmed.

So instead of getting his hand raised, Casella led 9-8 entering the second. Unfazed, he took firm control the rest of the way, coming out on top 15-8 to secure seventh and his All-American honors.

He continued his winning ways as a junior in New York, going 42-5 in 2013-14 at 120 pounds, including a second place showing at the Eastern States (behind national #1 Nick Piccininni of Ward Melville) and a fifth place medal at the state tournament.

“I thought my junior season was alright,” he said. “I was hoping to win a state title this year, but I guess it happens to the best of us sometimes. Coming from [seventh] last year at Eastern States to second behind Nick, I was happy about that.”

After three times on the NYS podium, Casella is looking to end his career on the top step – both individually and with his Locust Valley teammates.

To reach his goals, he spends significant time at Vougar’s Honors Wrestling (VHW) and will once again compete in the international styles at the Junior Duals in Oklahoma [this week] and at Fargo.

“I go to [VHW] almost every night for workouts and I try to wrestle with [world champion Vougar Oroudjov] as much as I can.  If not, I wrestle with [state titlewinner] Vito Arujau or some of the other top kids that go,” Casella said.  “Wrestling with Vougar is hard, but it’s the best.  He really beats up on you and from that he shows you what you’re doing wrong.  The next time, you know what not to do and it makes it more interesting, but he’s so good he beats you another way.”

Casella said Oroudjov also made the connection to Maryland coach Kerry McCoy, something the Nassau County wrestler is thankful for.  While he’s not yet sure of his major [he said it will be “something with math”], Casella is sure that College Park is the place he wants to spend his post-high school years.

“After visiting Maryland, I knew that was the college for me,” he said. “I loved it so much, I knew there wasn’t any other place I would want to be.”

Nick Casella wanted to thank his Locust Valley coaches, Joe Enea and Tim Bellisari, and his dad for “being behind me the whole way and always supporting me.”