Recruiting Review: Looking Back at Top Ranked NY Wrestlers Since 2009

With the first official day of recruiting for the Class of 2015 (July 1) approaching, we thought we would take a look back at the New York wrestlers who were highly-ranked at the end of their high school years. While some of these grapplers have concluded their careers in the sport, we realize that many others still have plenty of wrestling to go as they continue at the college level.

One of the best college wrestlers of all time came from this class - Kyle Dake of Lansing High School and Cornell.  His plethora of accomplishments are well documented as the only person in college wrestling history to win four NCAA titles at four different weights.  And he did it without a redshirt year while earning Academic All-American honors as well.

Dake’s career was tremendous, but he wasn’t the only one to make an impact at the Division 1 level. Steven Keith of Harvard was an All-American (eighth at 133 in 2012) and made four appearances at Nationals while winning over 100 matches during his time with the Crimson. He was on the Stanford coaching staff last season. Meanwhile, both Ryan LeBlanc of Indiana and John Greisheimer of Edinboro were three-time NCAA qualifiers who advanced to the Round of 12 at the Big Show during their careers.

In addition, Ohio State’s Ian Paddock and Lehigh’s Austin Meys were early contributors for their teams. Paddock started as a true freshman for the Buckeyes, earning his first of four trips to the National tournament.  After a successful redshirt campaign, Meys racked up more than 20 victories and qualified for NCAAs in his frosh campaign. While a significant illness kept him off the mat for quite some time, he inspired many when he returned for a handful of bouts with the Mountain Hawks last year.

Both Alex Ekstrom and Zach Clemente won multiple NYS titles in high school. Both transferred from their original destinations back to the Empire State, with Ekstrom returning to attend the University at Buffalo and Clemente competing for Hofstra in 2010-11.

Mike Nevinger (Letchworth Central) faced Dake in his final scholastic match before joining him at Cornell.  Nevinger wasn’t in Intermat’s final Top 100 but he certainly made his presence felt as a three-year starter and a two-time All-American for the Big Red at 141 pounds.  He took seventh (in 2012) and fifth (in 2013) at the NCAA tournament.

Some other New York high school wrestlers from the Class of 2009 had strong careers at the Division 1 level.  In fact, Brockport’s Christian Boley (Maryland) and Walton’s Cody Reed (Binghamton) met in the first round of the NCAA tournament at 197 pounds twice in their careers.  Both came within one win of All-American status in 2014, a feat Boley, the Midlands champ as a senior, accomplished more than once. Joining them in the Round of 12 in Oklahoma City this March was Greece Olympia’s Josh Veltre, who won close to 25 bouts as a senior at Bloomsburg. 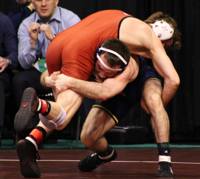 Rocky Point’s Stephen Dutton was the first of this group to reach the Division 1 medal stand, taking seventh at 141 in 2014 for Michigan.  Dutton was immediately effective at the college level, making the Round of 12 as a true freshman while competing for Lehigh.

Dutton’s movement to a new school is something he has in common with a number of others in this class. Tyler Beckwith and Lance Moore transferred to Cortland, Anthony Volpe to Maryland, Angelo Malvestuto to Buffalo, Justis Flamio to Rutgers and Nick Arujau to Cornell.

While with the Big Red, Arujau earned the second-semester starting nod in 2012 and made an appearance at the NCAA tournament, picking up a victory. He isn't the only other National qualifier in the class. Cody Ruggirello competed in Oklahoma City in 2014 after compiling over 25 victories for Hofstra at 149, while Lance Moore saw action at the Division III NCAAs this season for Cortland.

Andrew Lenzi has been a mainstay in the Penn lineup throughout his time in Philadelphia, including three years as a starter.

Also, Anthony Bonaventura of Hauppauge was the DIII runner up at 174 pounds this year for Waynesburg.

Nick Gwiazdowski was considered one of the top upperweight recruits in the nation in 2011 and it didn’t take long to see why. As a true freshman, he piled up wins right away for the Bearcats and finished eighth at the NCAAs to collect All-American honors.  After transferring to North Carolina State and taking a redshirt year, Gwiazdowski came back even better, winning the national title at 285 in Oklahoma City.

Gwiazdowski wasn't the only national finalist from this class in 2014.  Cortland's Bob Dierna nabbed second place at the Division III championships at 149 pounds after taking third the year before.

Also getting to the championship round at a big event this past season was Steven Rodrigues, who captured silver at the Midlands at 141 pounds for Illinois before making a trip to the NCAAs.

It looked like 2013-14 could be a breakout year for Owen Scott, as he took second at the Bearcat Open and then earned a 15-2 major decision as Cornell's starter at 174 pounds in the opening dual of the season.  The next day, however, at the New York State Intercollegiates, he sustained a season-ending injury.  While talking about Owen Scott, it's worth mentioning that his twin brother and teammate Craig Scott filled in for Steve Bosak early in the 2012-13 campaign at 184 pounds, going 17-7 overall, including a crown at the NYS Intercollegiates and a pair of wins over the previously mentioned Cody Reed.  He returned as a heavyweight in 2013, but had surgery following the Bearcat Open, missing the rest of the campaign.

Derak Heyman wrestled as a freshman at Binghamton before transitioning to MMA, while Nigel McNeil went 22-4 during the 2011-12 season for Cortland.

In addition to Gwiazdowski, there is another national champ in this class. Anthony Abidin wasn't listed in the Top 150 by D1CollegeWrestling.net, but the 2011 NYS gold medalist went on to win a NJCAA crown for Nassau in 2012 and now wrestles at Nebraska.

Abidin didn't take the mat at the NCAAs this year, but a few other members of this class have wrestled at DI nationals, including Warwick Valley's Mitchell Wightman (Boston) and St. Anthony's Jimmy Morris (Rider).

And there are a number of wrestlers who were finalists at other levels in 2014, including Brentwood's Alex Gomez, a runner up in DIII for Ithaca and New Rochelle's Malcolm Allen, a silver medalist in NJCAA action.

There's still a lot of wrestling left for this group.  But six of the wrestlers listed above were starters at the Division 1 level a year ago in their second year out of high school.

Leading the way was the Cornell duo of Brian Realbuto and Dylan Palacio, who both had successful freshmen seasons, including placing at prestigious events such as the Cliff Keen Las Vegas and the Southern Scuffle.

Realbuto became the first member of this class to make the Division 1 NCAA podium when he took sixth in Oklahoma City at 157 pounds.  The Somers star dominated defending national champ Derek St. John of Iowa, 11-4, in the quarterfinals before dropping a close battle to eventual titlewinner Alex Dieringer of Oklahoma State despite sustaining a severe knee injury in the first period.

Palacio fought through some significant injuries of his own during his run to the Round of 12 at 165 pounds at the NCAAs.  In the "blood round", he was tied with two-time All-American Michael Moreno of Iowa State until the waning seconds of the contest.

Meanwhile, fellow 2012 NYS champ Jamel Hudson compiled a 16-4 mark in his redshirt freshman year with the Pride at 133 pounds with 10 bonus point wins. He didn’t compete in the postseason but returned for freestyle action and will be someone to watch at 141 in the future.  Maverick Passaro expects to join Hudson as a Hofstra starter in the lightweights next season.

Also seeing significant mat time in 2013-14 were Sean McCabe, who led off the Rutgers lineup at 125 pounds; Ben Haas, who manned the 165 spot for Lehigh; and Tony Lock, who represented Buffalo for the second straight year at 184.

While redshirting, Quinton Murphy won over 45 matches and placed at a number of open tournaments after moving back East to Clarion from Indiana.  We recently received word that he will wrestle for Niagara next year.

Speaking of Niagara, both Jimmy Kloc and Chris Nevinger took the mat for the Thunder Wolves in 2013-14.

James Dekrone of John Glenn is headed to Division 1 at West Virginia next year after becoming a national champion for Nassau in 2013 at 149 pounds. Another wrestler from outside the Top 200, Sam Speno of Fox Lane, won twice at the NCAAs this year in his second consecutive appearance for NC State.  Several other members of this class held down starting spots in DI, including Whitehall's Zach Diekel (Lehigh), Wayne's Frank Affronti (Hofstra) and Canastota's Anthony Finocchiaro (Brown).

And we haven't forgotten about another finalist. Marathon's Lucas Malmberg was a Division III runner up this year for Messiah. 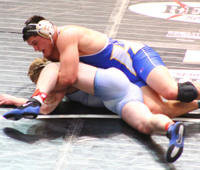 While redshirts are common in college wrestling, several members of the Class of 2013 stepped on the mat right away.  That included Tyler Grimaldi, who was a fixture in the Crimson lineup at 157 and Nick Tighe, who competed at both 133 and 141 for the Bearcats.  Mike Hughes started at heavyweight for Hofstra from Day 1.

Both Nick Kelley and Zack Zupan are expected to contend for starting spots this year for the Bearcats.  Perhaps the same will be true for Nicky Hall and Troy Seymour at North Carolina State.  The duo spent last year at Wyoming Seminary and will join the ACC squad this fall.

The early season Binghamton Open was a great place to watch the New Yorkers as a number of the wrestlers discussed above took the mat there, as did TJ Fabian and Dan Choi.  Matt Leshinger was fifth in the Open division of the New York State Intercollegiates for Columbia.

Year 1 is in the books, but we know that most of the stories for this class have yet to be written. 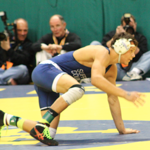 This class hasn’t yet begun the college experience.  Some will be staying within the state borders, while others are headed to historical powerhouses elsewhere.  Who will jump right into the fray as a freshman?  And who else will make an impact? After all, multi-time state champions like William Koll and Rich Sisti didn’t make the Top 150 lists but are capable of contributing at the next level.

We'll be following their journeys, starting this fall. Stay tuned . . .