No Legs, No Excuses: 6-Year Old Isaiah Bird Continues to Amaze Despite Challenges

Watch ESPN's profile of Isaiah Bird on May 17, debuting on the 10 a.m. ET edition of SportsCenter and repeating in other editions of the program throughout the day.

The preview is here. 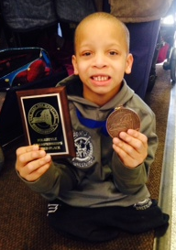 Two seconds.  That’s all it took for Miguel Rodriguez, Long Beach Gladiators wrestling coach and a teaching assistant in the Long Beach Schools to know he had to work with Isaiah Bird.

“My boss asked me to meet with a new kid to the school, a child without legs,” Rodriguez said. “As soon as I met him, I knew right away that I wanted to work with him. He asked me to pick up him so we could play basketball. He was so friendly and outgoing.  I knew he was special.”

Six-year old Bird has indeed done special things already. He may have wanted to shoot hoops with Rodriguez when they first interacted, but that’s no longer his activity of choice.

Rodriguez introduced him to wrestling through the Long Beach Gladiators over a year ago and he quickly embraced the sport.

“He pushed basketball to the side,” Rodriguez said. “It’s all about wrestling for him now - he got really into it. He liked it right away.  He saw that not having legs could be an advantage – it’s hard for people to take you down. He also has amazing upper body strength. He walks on his hands so his hands are basically his legs. He practiced and practiced and practiced and he did very well in his first year.  Actually, as soon as he wrestled his first match, we realized we could teach him and he would develop his own style.”

That style is heavily influenced by a wrestler who faced some of the same challenges as Bird while growing up in the sport on Long Island. Rohan Murphy lost his legs at birth, but went on to wrestle at Penn State before representing the United States internationally in powerlifting.

“When Isaiah started, we called Rohan and he came down,” said Long Beach High School head coach Ray Adams. “The first time Isaiah saw Rohan, the look on his face was amazing; it was like seeing himself in the future. It’s been nice to see that relationship develop.”

“Rohan Murphy is Isaiah’s idol,” Rodriguez added. “That’s his superhero. He accomplished so much without legs.  Isaiah talks about how he needs to do well in math and all his subjects so he can go to college and wrestle like Rohan Murphy.  We spoke to Rohan and his high school coach about what they did when he was learning to wrestle – how to teach Isaiah the right things to make him as successful as possible.  Isaiah continues to get better. He’s been outstanding.”

Indeed, he has. According to Rodriguez, Bird placed third in the state and sixth at the War at the Shore Nationals, among other achievements.  His medal count continues to climb.

“Isaiah loves his medals, but now he’s talking more about the big trophy he got taking sixth at Nationals,” Rodriguez said. “That was unexpected and amazing.”

Words like “amazing” are often used to describe Bird.

“It’s inspiring to watch him wrestle,” Adams said. “He goes out there and operates with what he has and makes no excuses about anything.  It’s great to see someone overcoming the odds the way Isaiah does.”

“I think he shows that anything is possible,” Rodriguez added. “Here you have a child with no legs, who says he doesn’t need them.   Everything we do, he tries the best he can. If he can do it, the others can do it.  There are no excuses – that’s Isaiah’s line. That’s his motto.  We’re very lucky to have him as part of Long Beach Gladiators and at the same time, he’s lucky to have the wrestling family and wrestling community. The community has shown that it will come together and help him when he’s in need."

Bird does face additional challenges off the mat. He is homeless – currently living in a shelter with his mother and younger brother.

After a story about him appeared on News 12 Long Island earlier this spring, some assistance arrived, including a wheelchair.

On June 1, the community is once again coming together to support him at the Isaiah Bird No Excuses Fundraiser from noon to 4 p.m. at 1 Commerical Avenue in Garden City. [Editor's Note: This article is from 2014, so this fundraiser has already happened].

The event will feature plenty of star power, with UFC Champion Chris Weidman and several other fighters in attendance.

“Some great people saw Isaiah was in need and stepped up to the plate to do a fundraiser for him,” Adams said. “It should be a really great event with opportunities for people to meet some stars and support Isaiah and his family.”

The event, presented by Ray Longo and Chris Weidman’s Power MMA, The Uno Dos Foundation and the Long Beach Gladiators, will include an open workout and Q&A with Weidman, wrestling seminars and a signing with UFC and MMA Fighters such as Aljamain Sterling, Al Iaquinta, Eddie Gordon, Gian Villante and Pete Sell.

“This fundraiser will help Isaiah achieve his goals in life -  on and off the mat,” Rodriguez said. “He has goals for the future – he says he wants to be a teacher and a coach. There are a lot of things he needs.  His family doesn’t have a place, a bed, a mattress – zero. This will help them get the things they need.

There’s one thing Bird has mentioned he doesn’t need.  In an interview with News 12 Long Island, he said, “I have no legs, but I don’t need no legs. I’m a wrestler. I'm a gladiator. I'm stronger than everybody.”

His strength is something those around him certainly admire.

“Isaiah’s only six years old, but people often think he’s older,” Adams said. “He’s a great kid with a challenging home situation.  He faces things that a lot of us don’t.  But he doesn’t look at it that way.  He’s a fighter and an inspiration.”

Let the updated Class rankings keep rolling out, next up is the Class of 2026! Twin Brothers claim the top 2 spots… https://t.co/dhVoEBNIMZ