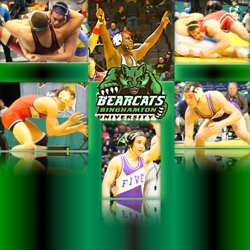 VESTAL, N.Y. - Binghamton head wrestling coach Matt Dernlan has bolstered his program, both in quality and quantity with a 10-man recruiting class that has lofty scholastic credentials.

“We’re very excited about this incoming class of freshmen,” Dernlan said. “Each one of these individuals embody all the characteristics we’re looking for, as we continue to climb the national ranks. They are all passionate about the sport, love to work and most importantly, they are all high character young men who are committed to living the lifestyle for success on and off the mat. This is a special group of guys that has the potential to accomplish some very special things in the coming years.”

Below is a capsule look at each student-athlete.

Connor Calkins (Hwt) – Capped undefeated senior season (55-0) at Alfred-Almond with state championship… top-ranked heavyweight in NYS and No. 6 in country (Flowrestling)… had most wins and most pins (39) among any wrestler in the state in 2013-14… four-time sectional champion and three-time Flomajor champion… captured title at Flo Freakshow, considered toughest pre-season tournaments in country… three-year captain… two-time sectional MOW… Scholar-Athlete and National Honor Society member… won Section V Sportsmanship Award… also sectional discus champion… father wrestled at Binghamton from 1988-92.
Dernlan on Calkins: “Connor has really started coming into his own the past year. He captured a state title and won several prestigious pre-season national tournaments, that established him as one of the top heavyweights on the country.  Connor’s upside is limitless. He has the potential to go down as the best heavyweight in our program’s history.”

Anthony DePrez (165/74) – Will join twin brother Vincent at Binghamton… state runner-up for Hilton this past winter… went 46-1… career record was 194-42… five-time letterwinner… Flo Nationals All-American… two-time All-Greater Rochester selection… five-time all-league… Honor Roll student.
Dernlan on DePrez: “Anthony is another one our recruits who really started to jump levels his senior year. He made a nice run to the the state finals this year. In seeing Anthony’s growth this year, I believe his mental confidence started mirroring his physical abilities. If he keeps tracking the way he did over the course of this year, he has the potential to have a very special career. Anthony and Vincent are great character kids and unbelievably fierce competitors.”

Vincent DePrez (157/65) – Will join twin brother Anthony at Binghamton… capped 46-0 senior season at Hilton with state championship at 145 pounds… three-time state finalist with runnerup honors in sophomore and junior seasons… went 222-14 in five-year scholastic career… four-time state placewinner… Flo Nationals All-American… four-time All-Greater Rochester selection… five-time all-league… Honor Roll student.
Dernlan on PePrez: “Vincent is coming off the heels of a tremendous scholastic career. He’s an amazing talent and has all the physical and mental tools to make an immediate impact next year, if necessary. We expect Vincent and Anthony to be the mainstays at the middle of our line up for the next 4-5 years.”

For more on the commitment of the Deprez brothers, see here.

Thierno Diallo (125) – Transferred to Binghamton in spring semester… 2013 state champion for Duval High (Md.)… went 35-0 in senior season… three-time state placewinner (2nd, 3rd, 1st)… posted career record of 110-7… Fargo All-American… Flo Nationals All-American… first-ever four-time Prince Georges County champion.
Dernlan on Diallo: “Thierno is one of the most physically gifted athletes I have ever been around. He also has an unbelievable upside, as he has only been in the sport for four years. In that time he’s accomplished quite a bit. We expect him to make an immediate impact on the national scene next season.”

Jake Kocsis (165/74) – Two-time New Jersey state qualifier at Phillipsburg High… went 41-5 in senior season… placed fourth at 170 pounds at state championship… runnerup at prestigious Reno Tournament of Champions… notched 91 career wins… set school’s senior wins record… three-time district placewinner… two-time regional placewinner… team won state championship twice in his four years.
Dernlan on Kocsis: “Jake is coming to us from one of the most storied high school programs in New Jersey and had a great senior campaign. Jake has a huge upside and his drive matches his potential. We were very excited to pick Jake up this spring and believe he will be a huge contributor for us in the coming years.

Joe Nelson (125) – Two-time state qualifier from nearby Oxford… placed third in 2012… Section IV champion as senior… coached by former BU NCAA qualifier Craig Tefft… also played baseball, soccer and football… Class Valedictorian… Scholar-Athlete.
Dernlan on Nelson: “Joe is a product of Section 4. He is coming off a stellar high school career. A lifer at 125, Joe will add tremendous depth and competition in our lower weights.”

Steven Schneider (174/84) – Capped 49-1 senior season with state 170-pound title for MacArthur High… two-time state finalist with runnerup honors in 2013… Senior National All-American… compiled 175-22 career record… five-year letterwinner… two-time captain and team MVP… selected for 2014 Long Island Team Award.
Dernlan on Schneider: “Steven is a phenomenal talent with a work ethic that matches his abilities. Steven has all the tools to very special at this level. He is technically slick and proficient but is as hard-nosed a competitor that I’ve seen in recent years.”
For more Steven Schneider, see here.

Mark Tracy (184/97) – Capped a 41-2 senior season with a state championship at 182 pounds for Sachem East… Senior National All-American… went 117-22 over scholastic career… earned numerous team awards: Most Inspirational, Most Outstanding, Most Improved and Coach’s Award… clinched county championship for Sachem… team went 16-0… also played football.
Dernlan on Tracy: “Mark, like Jake Kocsis, was a huge pick up for us during the late signing period. Mark had a phenomenal senior campaign, storming through the New York State Tournament to win a title and following it up several weeks later by placing third at the High School Nationals. Mark is a rugged, physical competitor who loves the grind and fight the sport of wrestling offers. We expect him to make a huge impact for us in the coming years.”

For more on Mark Tracy, see this link.

Reggie Williams (184/97) – Local recruit who won state championship at 195 pounds this winter at Johnson City High… Senior National All-American… four-time state placewinner, adding a runnerup finish to his title… six-year letterwinner… five-time high school All-American… also played football… top offensive player in the sectional final.
Dernlan on Williams: “Reggie is another great character kid who is coming off a phenomenal scholastic career. Reggie is a tenacious competitor who also has an amazing work ethic. He has the ability and desire to be a huge impact person for the program.”

For more on Reggie Williams at the time of his commitment, click here.