The Newest Bearcat: After Beating a National Champ, Connor Calkins Commits to Binghamton 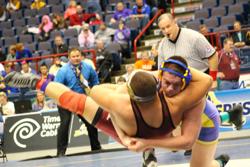 A national champion [Vermont’s Jesse Webb] stood in front of Alfred-Almond’s Connor Calkins in the 285-pound title bout at the Journeymen Classic at the end of September.  Webb was also the defending gold medalist at the Journeymen event.

Calkins didn’t allow him to repeat as he captured a 6-3 victory and the crown.

“I scouted him out and knew what he does,” Calkins said. “He’s a grinder and he likes to go for the bear hug.  I was able to score off that bear hug attempt myself. It turned out to be a really good match. I absolutely, 100% expected to beat him.  Wrestling is a mental game and I’ve been training so hard.  It was a good win to pick up.”

Calkins has recently made a habit of big wins.  After securing a wildcard bid to the New York State championships in February, the Section 5 senior entered the 16-person heavyweight bracket as the #16 seed.

In round one, he was set to face returning finalist Alex Soutiere.   As is often the case in the opening match for the top seed, the match wasn’t close.  However, it was Calkins who took control, building a sizable lead before recording a pin with just seconds remaining in the third period to score the upset.

“When I watched video on [Soutiere], I knew he finished second in the state the year before, but I really thought I could win,” Calkins said.

He wasn’t done winning.  In the next round, he notched a 9-1 major decision over Byron Bergen’s Mike Saxman, a grappler who finished ahead of him at the SuperSectional qualifier (although they didn’t meet there).

Things got a little more difficult, however, as Calkins dropped his semifinal contest to eventual champion Matt Abbott.  In the process, he suffered an injury that led him to forfeit his first consolation bout, sending him to the fifth place match.

“I hyperextended my elbow and hurt my bicep in the semis,” he said. “When I saw that it was the same guy [Saxman], I talked to my coach and said I had to wrestle.  It would be important to get points for next year’s seeding and to finish as high as I could.  I felt like I showed some heart going out there and gutting it out.”

His efforts paid off, as he topped Saxman 6-2 to earn a fifth place medal.

It didn’t always look like Calkins was destined for All-State status.  Back in eighth grade, he said his record was around .500.  However, he came back to take a Class B Sectional title as a freshman at 160 pounds and was determined to keep climbing the ladder.

“I sat down with my dad to have a serious talk,” Calkins said.  “He asked me what I wanted to do and I said I wanted to take my wrestling to a whole new level.  I dedicated myself to that.”

According to Calkins, his father Richard, a former wrestler, fully understood what dedication to the sport entailed.  Now, father and son have yet another thing in common – being Bearcats.

Earlier this week, Connor Calkins committed to Binghamton University.  He said that while his father went there as well, there were many other reasons for his decision.

“When I took my official visit, I had one of those gut feelings that it was right,” he said, adding that he also considered Buffalo and Cornell. “Everything felt right to me. I really liked all the coaches – they seemed really loyal to me.  The coaches and wrestlers seemed like the kind of people I want to be surrounded by.  Having so many New York wrestlers there was actually a really big factor.  I felt comfortable because I know a lot of them from the state tournament.”

The state tournament came up often and is definitely on his mind.  While his trip to the Times Union Center ended well with the previously mentioned fifth place showing, Calkins didn’t have an easy path as a junior despite a strong 38-4 mark with 20 pins.

He suffered an injury to his dominant hand in late October of 2012, which he said slowed him down for much of the campaign.  And he moved up to the 285-pound class in February despite weighing about 210. [His workout partner, Zack Bacon of Hornell, was the state champion at 220].

Calkins said he’s nowhere near that weight now.  In fact, with the training schedule he has in place, he mentioned that he’s closer to 240 pounds.

“Honestly, I felt sorry for myself after losing in the semifinals [at the state tournament] last year, but that will never happen again.  It made me want to push hard and I have been.  I’ve made major gains. I’ve been wrestling twice a week at the Finger Lakes Wrestling Club and I lift and work out every single day.  I make sure I do something every day to make myself better.”

Given that, he feels that his best performances are ahead of him.

“I just beat a top kid in the nation,” he said of the triumph over Webb. “There’s still a lot I want to do.  Committing to Binghamton makes me want to work harder.  Now I don’t have to think about college coaches calling me. I can just focus on winning a state title.”