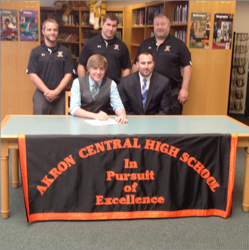 Courtesy of the Schultz Family

---Article courtesy of the Schultz Family

Schultz started his wrestling career at age nine and has devoted endless hours to the sport year round for the past nine years. As a youth wrestler, Garrett spent weeknights practicing and Saturdays and Sundays all day at tournaments either with the Pembroke Youth Wrestling club, Roy Hart Youth Wrestling Club or on his own with his mother and father.

Garrett as a youth wrestler traveled all over NY, PA and OH to tournaments every weekend to find the toughest competition to make him better. When he was 11 years old, he was offered the opportunity to travel to Tokyo, Japan with former professional wrestler and Akron great Dick “the Destroyer” Beyer and was honored to be one of only two wrestlers from the USA that year to compete in the All-Japanese Nationals freestyle wrestling tournament where he placed third and was hooked on wrestling.

When Schultz was in 8th grade, he wrestled JV for Akron and at the end of that season, he suffered a dislocated and broken elbow in practice. But this did not stop him. He came back to wrestling his freshman year and wrestled his first season of varsity where he was named one of the team captains. In the 145 pound weight class, he ended the season with a record of 17 wins – 8 by pin – and 17 losses.

Schultz was Niagara Orleans League and NYS Section 6 Class C 160 pound champion. The Akron squad as a whole was able to achieve the goal of being Niagara Orleans League team champions for the first time in school history. Schultz wrapped up his varsity career as a senior with a record of 33 wins – 22 by pin – and six losses.

“Garrett is one of those rare individuals who excels in any situation he is put in and his success permeates throughout the rest of the team," said head coach Joe Suhr. "He leads by example, always striving to do his best and showing others how to do the same. It is such a relief as a coach to know that young athletes coming into our program can be given such a hands on and dutiful example of how to conduct themselves in all walks of life. Garrett has had many individual accomplishments throughout his high school career but his leadership ability to me is the most impressive.

Garrett possesses many traits that are valuable to any program. First of all Garrett is a well-rounded athlete. He participates in and is a captain in three sports including football, wrestling and lacrosse. Unlike many three-sport athletes who focus only on the sport they are in at the time, Garrett works on all three year round. He somehow finds a way to participate in offseason workouts through each season. In a typical week during wrestling season Garrett will attend practice from 3:30 to 6:00 p.m. and immediately drive an hour to make his travel lacrosse practice two to three times a week. He also finds a way to make football workouts on weekends when we do not have tournaments and does wrestling clubs on Sunday morning. I know it sounds like a lot to fit into a week but this is typical for Garrett. He does it all because he loves the sports and enjoys staying active. He does it because he understands work doesn’t end when the season does and feels an intense responsibility to better himself and the team year round. I believe this speaks to how hard a worker he is and the level of commitment he shows to any task or team he is involved in. Garrett also possesses trust in his coaches and shows them respect. Garrett is also a model competitor, he is both a gracious winner as well as respectful in defeat. I cannot tell you how many coaches and officials have pulled me aside to tell me just that, though it is something I already have known. All these things are what makes Garrett one of the most well rounded young men I have ever had the privilege of coaching and why I believe he will be successful in his future endeavors”.

While at Seton Hill University, Garrett will be led by head coach Brian Tucker and assistant coach Mark Lewandowski, who is a former four-time NYS wrestling place finisher from Lancaster High School and a graduate of the University at Buffalo, where he was a 2011 MAC champion.

Seton Hill is part of the PSAC Conference (Pennsylvania State Athletic Conference) which is currently ranked the toughest conference in Division ll wrestling. The Seton Hill team also has the third highest GPA of all Division II teams in the nation. While at Seton Hill, Schultz will major in Biology, working toward his goal of becoming a marine biologist.

Schultz wishes to thank his coaches, teammates, teachers, friends and family along with everyone who has touched his life in any way throughout the years with a special thank you to his mother Brenda Schultz, father Scott Schultz and brother Tyler Schultz for their years of support and guidance that have contributed to his success and have helped make this great opportunity possible.

Let the updated Class rankings keep rolling out, next up is the Class of 2026! Twin Brothers claim the top 2 spots… https://t.co/dhVoEBNIMZ