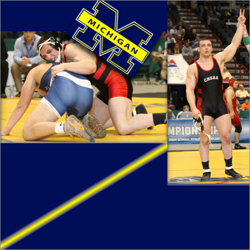 On Thursday afternoon, one of the country’s top unsigned prospects from the class of 2014 officially came off the board when the coaching staff at Monsignor Farrell High School in Staten Island communicated that the battle to land two-time 220-pound NYSPHSAA Division I State Champion, Richard Sisti, had reached its conclusion. The University of Michigan landed the services of the immensely talented and chiseled big man, while inside sources suggested that the University of Maryland and Hofstra University were the other schools in the running.

The addition of the three-time Catholic High School Champion further bolsters the cohort of incoming studs to the Wolverines, a class that prior to Sisti's signing was ranked 10th in the nation.

Undefeated the past two years for the Lions, the consensus top-15 ranked wrestler in all of the major polls at 220 pounds (#10 by Flo; #13 by InterMat; #15 by AWN/The Open Mat) closed out his career on a 67 match winning streak, posting 29-0 and 38-0 records in his junior and senior seasons after going 1-2 in 2012 in his first appearance at the state tournament.

As impressive as this collection of consecutive victories may have been, what sets the future Big-10 Conference student-athlete apart from most of his Empire State peers is the sheer dominance he demonstrated in rolling over the competition.  Securing falls in 46 of these 67 wins, the “gentle giant” whose physique was once compared to an action figure by the parent of his opponent, would go nearly two years without surrendering an offensive point before a reversal in the state finals by Walt Whitman junior, Vin Feola, would snap the streak.

For the remainder of the article by Matt Diano from Gotham City Wrestling, see this link.

To read our feature on Sisti from earlier this year, see here.