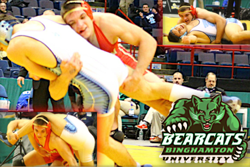 Sachem East’s Mark Tracy was behind on the scoreboard against California bronze medalist Johnny Beltran in the third place match of the NHSCA National Championships in Virginia Beach.

And then came a dramatic change in the match – but not for the better.

“[Beltran] dumped me on my neck – I lost feeling in my arms,” Tracy said. “I took my injury time, but I really wanted to finish wrestling.  I tried to regain composure.”

He did.  Trailing 7-4 in the third period, he kept pressing the action.  When he saw an opening, he locked up a cradle and recorded a dramatic pin with about 30 seconds left to secure third in a bracket that included 40 wrestlers from more than 20 states.

It was a fitting end to an excellent senior campaign for Tracy, who went 2-2 in Virginia Beach a year ago after completing his junior season for the Flaming Arrows with a third place performance at 160 pounds at the Section 11 championships.

As soon as that season was over, he decided his final high school campaign would end differently.

“I wrestled every single chance I got, at least three times a week,” Tracy said. “I competed as often as I possibly could and did a lot of lifting.  I knew right away that I would be going up a couple of weights [to 182].  My goal was to definitely win a county title.”

It became clear pretty early in the season, however, that Tracy was a threat for more than a county crown.  He began by winning his first 21 bouts (17 by bonus points) and nabbed fourth place at the prestigious Eastern States Classic, losing to nationally-ranked Christian Dietrich of Greene (the eventual Division 2 state champ) and splitting a pair of contests with John Jay East Fishkill’s Brett Perry, including a loss in the third place bout to Perry.

That was Tracy’s last setback in the Empire State, however.

At the Suffolk County tournament, the stakes were high as he prepared to meet Deer Park’s David Hamil in the finals.  It wasn’t only his season’s goal of county gold on the line.  The team race was also in play, as Sachem East was in the midst of a battle to win its second straight Section 11 championship.

“I knew how important it was for the team, but I wasn’t really nervous about it,” Tracy said. “I went out there relaxed and confident and just wrestled.”

His relaxed and confident approach did the job.  After topping Hamil in a one-point tilt earlier in the year, Tracy dominated, earning an 11-3 major, a victory that put Sachem East into first place for good.

The season was far from over for Tracy, however.  In his first appearance at the Times Union Center, he wasn’t intimidated by the state tournament atmosphere, winning 9-2, by fall and 9-4 in his first three bouts (with two of those wins coming against the eventual third and sixth place finishers).

That brought him to the finals against a familiar foe – Perry.

“Wrestling him again was hard,” Tracy said. “He knew what I had, I knew what he had.  He knew what I wanted to do.  I think I was timid in the first period.  In the third, it was a battle – someone had to score.  I felt that I trained hard and was ready to go.”

He finished strong in the final stanza, ending with an 8-2 triumph and a state championship.

“I came into the season with the goal of winning the county,” Tracy said. “Winning the state title was something extra.  I wanted to win it, but at the beginning, I didn’t really expect myself to do it.”

Tracy's title at the Times Union Center was sandwiched between the championships of 170 pounder Steve Schneider of MacArthur and 195 pounder Reggie Williams of Johnson City -- a pair of wrestlers who committed to Binghamton months prior to the tournament.

A few days ago, Tracy joined them when he signed on with the Bearcats, choosing the institution over Hofstra, Maryland and Rider.

Tracy was excited about the School of Management and plans to be a business major.

“The academics are great.  And when I went up for my visit, I really liked the kids on the team,” he said. “The atmosphere and the team chemistry was great.  I felt like I belonged there; like it was a family.”

That family continues to compile NY talent.  Tracy is the fifth New York State champion in this recruiting class, including the previously mentioned Schneider and Williams, as well as Vincent DePrez of Hilton and Connor Calkins of Alfred-Almond.  In addition, NYS finalist Anthony DePrez of Hilton and former placers Joe Nelson of Oxford and Joe Mastro of Yorktown (transfer from NC State) will join the squad, along with a few out of state prospects.

“I like what Binghamton is building,” Tracy said. “I’m excited to be a part of it.”