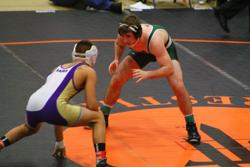 Only hours prior to the official release of the 2014 NCAA Division I Championship brackets, Columbia University received news that a potential future national qualifier, Locust Valley High School junior, Sam Ward, has given a verbal commitment to coach Carl Fronhofer.

In doing so, the two-time defending Nassau County small school titlist becomes the first member of the class of 2015 to select the EIWA conference member as his future destination.  The landing of Ward also represents the next in a growing list of examples that demonstrates the CU staff’s unrelenting desire and devotion to keeping the best and brightest from the Empire State at home.  The newest Lion will join six other New Yorkers on the Columbia roster when he arrives next fall.  Included in this collection of local talent is a 2011 National Prep runner-up (Ben Villaret; formerly of Monsignor Farrell), a 2011 NYS DI Champion (Connor Sutton of Section II’s La Salle Institute), a 2012 NHSCA Junior National Champion (Chris Araoz of Wantagh), 2013 NYS Large School placewinner Andrew Psomas (5th; also formerly of Monsignor Farrell), as well as last year’s 132-pound NYS DI Champion, Matt Leshinger of Sayville.  Hence, the Falcon upperclassman will find himself in some excellent company as he embarks on the next chapter of his academic and athletic careers.

As dominating in his academic pursuits as he is in his wrestling endeavors, before choosing the Gotham City based program, Ward was entertaining offers from several other Ivy League universities.   Ultimately, when considering all of the pros and cons associated with each of his suitors, the future economics major opted for Columbia because as he put it, “The combination of excellent academics and athletics is really what won me over.  I felt that the opportunities in both wrestling and my studies in combination with the location in Manhattan could not be matched.”

LETS GO TEAN NEW YORK! Check out which Empire Staters are heading to Greensboro this weekend for the @TheSuper32… https://t.co/yckEOIRXYj