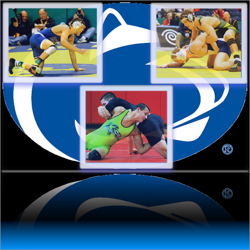 Shakur Rasheed was part of the record-breaking wrestling crowd of almost 16,000 that watched Penn State defeat Pittsburgh in December.  The experience left a strong impression on the Longwood senior.

“That was insane; it’s what really opened my eyes,” he said. “Longwood was a powerhouse in the past and we used to get good crowds.  Seeing the fans and the support system at Penn State was just insane. It seemed like fans were like family there.”

He looks forward to hearing those fans cheer for him in the future as he announced his decision to become a Nittany Lion after strongly considering Hofstra, Maryland and Arizona State.

“I made the verbal commitment a few days before the state tournament,” Rasheed said. “It’s not too far from home, but not too close, either.  I just felt that Penn State could bring out the best in me.  I don’t want to just be a name that is known in high school. I want to be like David Taylor and Kyle Dake and dominant guys like that.”

Like Dake, Rasheed is now a two-time NYS titlewinner.  He finished his career with four appearances in the state finals, including as a seventh grader at 96 pounds and as a sophomore at 145.  (He also nabbed fifth at 112 in 2011).

Rasheed was named the Most Outstanding Wrestler at the Times Union Center this past weekend after not yielding a single point during the tournament and completing the campaign with an 20-0 mark with only one regular decision. But that one bout (a 2-0 victory over Dan DeCarlo of Port Jervis in the semifinals) didn’t sit well with him.

“I’m happy I won, but I was upset about the semis match,” he said. “I didn’t wrestle how I should.  I think that match helped me with the finals because it made me mad and made me want to dominate even more.”

He certainly dominated, recording a 14-0 major over Columbia’s Angelo Kress in the title bout.

While he finished on top of the podium just like last year, Rasheed said the feeling he had afterwards wasn't quite the same this time around.

“It was different because this one meant more to me,” he said. “It sounds crazy because last year was the first one, but I had to get through a lot of things this year. I had surgery on my meniscus in December so I missed a lot of the year.  In the league tournament a few weeks ago, I hurt my shoulder and it’s still not good. But I stayed focused on the goal and didn’t let the injuries get in the way.  Mentally, it made me stronger.  Being off the mat made me even hungrier to win. I think I turned a negative into a positive and I was able to leave with a good legacy.  This year had so many issues, but it was my favorite year.”

His future head coach Cael Sanderson was able to see the finale of that “favorite year” as he was on hand to watch Rasheed win gold on Saturday night in Albany.

“It was awesome to interact with [Sanderson],” Rasheed said.  “He came out to see me twice [on Long Island] and the first time, it was at club practice.  It was just crazy.  A lot of the kids there were shocked and happy to see him.  He also came to our dual meet against Brentwood and guys were excited.  I felt good that I was the reason he was there.”

Rasheed said one of the things that resonated with him was Sanderson’s belief that his style “is a perfect fit with Penn State.”

The Longwood star agrees and looks forward to competing either right away at 165 pounds or at 174 as a redshirt freshman.

“I’m hoping to get a chance to wrestle with David Taylor and Ed Ruth when I'm there," Rasheed said. "I’m sure they’ll beat me up, but it will only make me better.”

Rasheed, a runner up at the 2012 NHSCA Nationals and a champion at 152 at that event last year, isn't sure when he'll compete next.

“I'm taking a week off to see how everything's going with my injuries," he said. "Hopefully I’ll be fine to train soon, because I need to represent Team X-Cel for Coach [Nick] Garone and rep Long Island as a whole at the Pop & Flo Duals [in May].”

But that's still a little bit down the road.  Earlier this week, Rasheed spent some time reflecting on the high school career that just ended.

“When I look back, it seems like it went by quick,” he said. “I’ll remember every last bit of it.  It’s upsetting to be done, but it’s an exciting feeling that I got to end my high school career on a good note.  Now, I’m looking forward to hopefully creating a legacy in college.”

For more on Rasheed from a feature last October, see this link.