Driven to Dominate: Longwood's Shakur Rasheed Looks to Win it All Again in His Senior Year 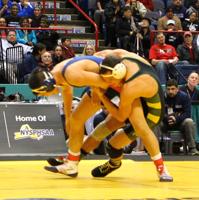 Shakur Rasheed said it was the “worst I’ve wrestled in a long time.”

Returning from injuries that had sidelined him for most of the summer, the Longwood star went undefeated at the Journeymen Classic to capture the 160-pound title and Most Outstanding Wrestler honors for the upperweights.  He faced a New England champion and wrestlers who took second and third at Fargo in 2013 – and won by a combined 21-5 score.

Not too shabby for his “worst.”

“When I tell people that, they look at me funny,” he said.  “But I’m not satisfied. It’s not about the title. Most wrestlers are in competition with the kids in their weight, but I feel like I’m in competition with every wrestler. I want to be the best.”

He showed his potential to be among the best as a seventh grader when he earned a spot in the state finals at 96 pounds.  After a fifth place finish as a freshman, Rasheed returned to the title bout in Albany as a sophomore in 2012, before taking silver for the second time.  A few weeks later, he again made the championship round of a big event – the NHSCA Sophomore Nationals in Virginia Beach, where he took second place at 145 pounds.

“When I lost the match [to Minnesota’s Larry Bomstad] in Virginia Beach, it felt like the state finals all over again,” Rasheed said.  “I knew I couldn’t let it happen again.”

He made sure in 2012-13 with a season of pure dominance at 152 pounds.  The Suffolk County standout went 34-0 with 22 pins. Only two opponents managed a regular decision.

But there was only one thing on his mind.

He punched his ticket to the finals with a technical fall, pin and a 5-0 shutout at the Times Union Center. In his third time wrestling on Saturday night at the biggest New York tournament of the year, he was ready.

“I was kind of numb at the moment,” he said. “Everything seemed so slow. I wasn’t nervous; I’d been there so many times before.  I was just thinking I had to win.  If I lost again in the finals, it would have been devastating.  I had to win.”

He did.  And he did it quickly.  Just 56 seconds into the title bout, Rasheed pinned Great Neck South’s Chris Koo.

“I didn’t care about getting the pin in the first period,” Rasheed said. “At the end of the day, I was just happy to get my hand raised there in the finals.  When I looked at the crowd and saw my friends and family hugging each other, it was a great moment.”

Appropriately, the fall came from the move Rasheed executed with perfection all year long – the cradle.

“I’ve been using that cradle since I started wrestling as a young kid,” he said. “People don’t see that it’s so easy to hit from all different angles.  It’s something that comes natural to me.  I work on other things – I don’t practice the cradle anymore.”

He may not practice it, but he certainly used it a lot, including at Virginia Beach where he returned to the national finals. This time, he came out on top, defeating Alabama’s Brandon Womack 9-6 in the 152-pound title bout to finish a perfect season as a state champion and a national champion.

The national rankers noticed, even if Rasheed wasn’t paying much attention.

“I’m not a strong believer in rankings,” he said. “It’s an honor to be there and I want to be #1 one day, but I haven’t checked them in a long time. I don’t even know where I am anymore.”

College coaches probably have a good idea of where Rasheed stands in the rankings.

“I have a group of schools that I’ve been talking to,” Rasheed said, preferring to leave out the names. “I can’t pick yet because I haven’t visited places so I wouldn’t be making a good decision. I’m not in a rush to commit, but I am excited to wrestle in college.”

Rasheed’s familiarity with college wrestling has been increasing recently.

“I’m unorthodox when it comes to wrestling because I don’t really watch wrestling much,” he said.  “My favorite sport to watch is basketball. But a lot of college coaches that got in touch with me compared me to some guys and I started to watch them. I realized that I’m getting better just from watching. Ed Ruth is one that a lot of the coaches mentioned.  The coaches said we do a lot of the same things in every position.  Other than that, my favorite wrestler to watch is probably Jordan Burroughs – he’s phenomenal; so fast and explosive.”

Many fans have used those adjectives to describe Rasheed as well.  (The vast majority of coaches and observers we spoke to all around the state said Rasheed is New York’s top senior). He named numerous people who have helped him develop over the years, but at the top of that list was his brother Malik, a multiple-time state placer for Longwood.

“Malik has definitely helped me so much,” he said. “He should have been a two or three time state champ, but he had bad luck with tearing cartilage in his rib and so many other things people don’t know about. He’s my biggest influence. Last year, he came to the room and wrestled with me. We really go at it – there are days he beats me up and days I beat him up.  We’ll leave the room bleeding.  At times, we fight because it gets that competitive, but he’s helped me so much.”

That spirit translates to basketball, which Rasheed said he plays just about every day, “even in the snow.”  And despite all his accomplishments, his intensity hasn’t waned at all on the mat.

“I have more of a desire to win now than ever before,” Rasheed said. “In seventh, eighth, ninth grade, I was only thinking about high school wrestling and what I wanted to accomplish there.  But now, I’m thinking about college and the Olympics.  A lot of kids who start young burn out because it’s a tough sport to dedicate yourself to.  It’s not really a sport; it’s a lifestyle.  For me, the feeling of not getting your hand raised is terrible, more now than ever.”

Rasheed doesn’t plan on having that “terrible” feeling this year.  He said he will certify at 154 pounds, giving him the option of being at 152 again or moving up to 160.

“My goals are to win leagues, counties, states and nationals,” he said. “I’m still deciding between Virginia Beach and FloNationals and I know they’re crazy hard tournaments.  But I don’t want to just win; I want to dominate. My goal is to dominate the whole year.”

He pretty much did that as an eleventh grader.  And while he’s proud of what he did in 2012-13, he’s not dwelling on last season.

“I was definitely happy about my junior year,” he said. “Once I graduate, I can look back and say I won states and nationals that year.  But two weeks after nationals, I moved on. I don’t reminisce too much.  I just think about what’s next.  The most important time for me is right now.”

Shakur Rasheed wanted to thank his brother, Malik, his uncle Greg, his mother and his family for their support.  He also wanted to thank coaches Mike Picozzi and Ethan Prifte for their huge influence on him over the years.  In addition, he mentioned the significant contributions of coaches Darren Goldstein, Steve Hromada, Nick Garone and Nick Hall.  He couldn’t name everyone, but thanked everyone who has helped him and supported him along the way.