Who is Heading to NJCAA Nationals? See Who Qualified from NY Teams 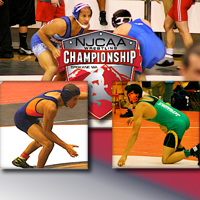 The NJCAA National Championships will be held in Spokane, Washington, beginning February 28.  New York will be well represented by several qualifiers from Niagara, Nassau, SUNY Sullivan and Jamestown.  Here is the list of entrants that we were provided for teams based in the Empire State.

Niagara County Community College won the Region title for the third straight year and will have a full team of 10 wrestlers at the Nationals after earning six individual crowns and two more silver finishes. 149 pounder Kevin Strong earned MOW honors and coach Keith Maute collected Coach of the Year accolades.  The Niagara qualifiers are (with this weekend's placement in parentheses):

Jamestown CC competed at the same event and will be sending a group to Spokane as well.  Those wrestlers are:

Two other New York squads made the trip to Georgia for their qualifier.  It was a worthwhile journey for both Nassau CC and SUNY Sullivan as both left with several wrestlers earning spots in the national tournament.

For Nassau, nine grapplers will compete for All-American honors.  They are:

In the first year of the program, SUNY Sullivan will be represented by three wrestlers in the Pacific Northwest.  It will be great to see so many New York teams at the national championships!

Last year, Nassau's James DeKrone won a national championship.  Who will challenge for a crown this year from New York?