There are 14 solid D1 squads going at it this weekend in Columbus, and while the top few seem to have some separation from the pack, the early round matchups will feature a ton of great individual and team matchups.

ROUND 1
North Dakota State vs UT-Chattanooga
The 165lb matchup with #3 Monk-NDSU and #9 Mock -UTC will be worth checking out, but other than that not a whole lot of drama here....NDSU +12

Hofstra vs Ohio State
Buckeye coach Tom Ryan sqaures off with his old team in round 1.  That is where the drama ends - Stieber will control #9 Vaith at 141 and the Bucks should roll...OHIO STATE +18

Oklahoma vs Bloomsburg
Bloomsburg has some matchup potential to make this intruiging, however they lack the firepower to knock off the Sooners even if things go well for them.  Jared Patterson likely will still be out at 125, and the fact that Bryce Busler of Bloomsburg did beat Kendric Maple in a preseason tournament, which makes this fun a first rounder to talk about, but Maple will not lose again and Bloomsburg would need to beat Maple, knock off #5 Travis Rutt at 197, and have everything else go right to win this dual....OKLAHOMA +15

Central Michigan vs Illinois
The Chipps are coming off a tough loss to in-state rival EMU, something that has not happened in a long time, so they will either be ready to bounce back or still down coming off that dual.  Illinois is likely without Gonzales at 197, which will hurt.  133 (Richards-IL vs Roth-CMU) and 141 (Rodriguez-IL vs Horan-CMU) are the matches to watch with Top 15 ranked wrestlers going at it, however, 184-285 could probably go either way also so this dual could go either way....CMU +2

Virginia Tech vs Oregon State
This is a tough dual to predict with a lot of weights that feauture less renowned individuals with simliar resumes going at it.  For me, the Beavers big guns Sakaguchi, Pena, Meeks, and Dhesi give them the edge as the Hokies lack those guaranteed weight classes.  #10 Sakaguchi vs #19 Neibert at 149 will be the best individual matchup to watch....OSU +4

QUARTERFINALS
Minnesota vs North Dakota State
Other than Monk over Zilverberg at 165, NDSU is not favored to win any other weights.  Former Gopher star Roger Kish is doing a great job as HC for NDSU, however, they are not quite there yet to compete with the likes of Minnesota...MINN +33

Oklahoma vs Central Michigan
This matchup may not even transpire as the Chipps have a big hurdle to jump in round 1 with Illinois, but if they do get to the Quarters they present an interesting matchup with Oklahoma.  Where CMU is good, for the most part, Oklahoma is also good (a little better on paper), and both teams are weaker in the many of the same areas as well.  This could be good for Central if they can pull some upsets and have their role players nab wins, or it could be bad as they could conceivably lose every match if things go south.  Patterson being out opens a door - 125, 141, and 184 should go to CMU.  133, 149, 174, and 197 chalk up to OU.  That leaves 157, 165, and 285 as toss-ups.  The big individual matchups to watch are #14 Roth-CMU vs #7 Brewer-OU at 141, #10 Horan-CMU vs Lester-OU at 149, and #20 Smith-CMU vs #18 Deangelis-OU at 157....OKLAHOMA +9 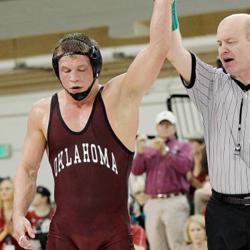 Oklahoma has been a bit up and down this year, however, they have also been banged up the last couple weeks so don't let their lopsided loss to Okie State last weekend fool you.  When they were at full-strength the Sooners beat Ok State 16-15 back in early December, and if they are back to full strength this weekend they have the firepower to take Cornell down to the wire in the semifinals.  Word on the street is Jarod Patterson is not back at 125, which could pose a problem for the Sooners.

Below is our in depth breakdown of Cornell vs Oklahoma in the Semifinals.

Cornell vs Oklahoma
The Run Down: 125 through 165 are all big time matchups and could be argued as "toss-up" or "swing" matches.  If Patterson is still out for OU, however, then 125 becomes a likely big bonus situation for Cornell. The Sooners are heavy favorites with likely bonus points at 174 (Andrew Howe) and 197 (Travis Rutt) and the Big Red have the same deal at 184 with Gabe Dean.  Oklahoma gets the slight edge at 285, but as is usually the case, the big guys could go either way.

The Difference: Cornell has no answer for Andrew Howe or Travis Rutt at 174/197, Oklahoma has no answer for Gabe Dean at 184 and even if Justin Deangelis is back at 157 for the Sooners, Reaboulto beat him 11-3 back in December in Las Vegas so Cornell should be locked in there as well.  That leaves 6 weights up for grabs and few of them met earlier in the year at the Las Vegas Invite.

Now, we have 4 weights left that should the difference makers.  At 133 Brewer beat Grey 5-2 in the Vegas semis, Brewer is favored here, but if Grey can turn it around and win this time, it could seal the win for Cornell.  The obvious pick at 141 is Nevinger, however, Lester has shown glimpses of greatness this year, including 2 wins over #11 Luke Vaith in Vegas back in December.  Moreover, Nevinger missed most of December with injury and has not had a real solid test since his return.  Therefore, the Sooners are more than capable of a big win at 141.  At 165 Palacio is ranked higher, but he only beat Glass 5-4 in Vegas....toss up.  285....total toss up.

Dylan Ness and the Gophers are rolling into Columbus this weekend

With our predicted tie in the semis, I am going to take Cornell to win the tie breaker or to find a way to sneak past Oklahoma with an additional bonus point somewhere down the line.

Regardless of who makes it through, the finals match will provide some stellar entertainment with a handful of great individual matchups.

Cornell has not lost a dual meet this season, and Minnesota is the #1 ranked dual team in the country.

Minnesota has one of the most balanced teams in recent memory, with a Top 10 ranked wrestler in 8 of 10 weights, and it is that balance that will make them very difficult for Cornell to beat.

125 - #1 Nahson Garrett (Cornell) vs Sam Brancale (Minnesota) - Garrett is the top ranked guy in the country for a reason, and barring a big move or throw (which Brancale has shown the ability to do), he should control this match and be hunting for bonus points....4-0 Cornell

133 - #15 Mark Grey (Cornell) vs #8 David Thorn (Minnesota) - Grey is a super talented freshman having a solid season who will be right in this match, however, you have to go with the 5th-year senior Thorn here who has shown more consistency...4-3 Cornell

141 - #7 Mike Nevinger (Cornell) vs #5 Chris Dardanes (Minnesota) - Neither of these guys are coming in on overly high notes as Dardanes has lost his last two and lost four times since January 1st while Nevinger has been banged up much of the year, missed the entire month of December, and has not really been pushed since coming back in January.  Both are returning All-Americans and this match could go either way, I will take Nevinger with his biggest win of the year...7-3 CORNELL

149 - #6 Chris Villalonga (Cornell) vs #3 Nick Dardanes (Minnesota) - Both these guys are having tremendous seasons.  Villalonga's only loss was to returning NCAA Champ Kendric Maple while Dardanes has only lost to top ranked Houdashelt of Mizzou and the always pesky Eric Grajales.  They were slated to wrestle each other at the Scuffle, but Villalonga defaulted out.  As far as their season resume goes - almost identical, however, Dardanes is a returning all-american with a little more big match experience so I will give him the nod...7-6 CORNELL

157 - #10 Brian Reabulto (Cornell) vs #5 Dylan Ness (Minnesota) - These guys were also slated to wrestle at the Scuffle, but Ness defaulted so this weekend would be round 1.  Oddsmakers would have to go with the most dangerous man in NCAA D1 today - Ness, however, the stud frosh Reabulto has shown signs of greatness this year with a 1 point loss to #1 James Green and a handful of impressive wins.  Reabulto's head-scratching losses this year in combination with Ness' flare for the dramatics and ability to step up in big-matches make me confident in picking Ness.  As is always the case with Ness, bonus points are possible and could change the dynamic of this dual meet...Minnesota takes the lead ...9-7 MINN

165 - #14 Dylan Palacio (Cornell) vs Danny Silverberg (Minnesota) - This is one of two weights were Minnesota is not ranked top 10 in the country, so Palacio is the clear favorite.  Silverberg has only given up bonus points twice this year, once in a last second pin against Oregon State and once to a guy named David Taylor, so I think he is safe in keeping this to a decision...10-9 CORNELL

174 - George Pickett (Cornell) vs #6 Logan Storley (Minnesota) - The Gophers will need to exploit a rare hole in the Big Red lineup here and Storley is the guy to do it fresh off a big win over Matt Brown, he has 3 of his last 4 wins coming by bonus point margins....13-10 MINNESOTA

184 - #3 Gabe Dean (Cornell) vs #8 Kevin Steinhaus (Minnesota) - One of the big storylines for Big Red Nation and the wrestling world this year has been the emergence of Gabe Dean in his freshman campaign.  These two met back on January 1st at the Southern Scuffle with Dean winning a tight one 3-2.  Expect to see more of the same between these two who wrestle very similiar styles, but who could bet against the freshman?....13-13 TIE

197 - Jace Bennett (Cornell) vs #4 Scott Schiller (Minnesota) - Schiller should win handily and anything besides bonus points would be a dissapointment....17-13 MINNESOTA

285 - Jacob Aiken-Phillips (Cornell) vs #5 Tony Nelson (Minnesota) - Nelson has been a bit off the last month, however, he should have no issues here with Aiken-Phillips and seals the deal for the Gophers...20-13 MINNESOTA