Waverly's Ryan Wolcott: On a Quest for 200 Wins and a State Title 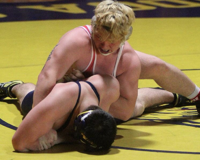 For Ryan Wolcott, there’s something that “always keeps me moving and trying to do the right things.”

It isn’t wrestling, although the sport does play a big role in the Waverly senior’s life.

“Having a son definitely changed my life,” he said. “It’s sometimes tough to take care of all my responsibilities, but I love it and I wouldn’t change a thing.  I want to represent him well.  I want him to grow up and want to be like me.  I know I’ll set high goals for him, like I do for myself.”

Those goals didn’t necessarily include reaching the 200-win milestone, but he’s on the verge of doing just that as he currently has 199 victories heading into the Section IV championships this weekend. [He already sits on top of the Waverly career list after breaking two-time NYS champ Colin McDonald’s previous record of 195 triumphs].

“I was happy to get my school record this year for wins,” Wolcott said. “I definitely want to get that number as high as possible, to set it as a goal for the younger guys.  There are eight matches left in my high school career and I want to be dominant.  I need to finish it off and get a better outcome than last year.”

Last year was somewhat of a breakout campaign for the senior, although he had plenty of success prior to that in the sport he began many years ago.

After wrestling at 135 pounds as a freshman, he competed at 170 as a tenth grader, falling just one match short of placing at the state tournament. (He lost to Warsaw’s Burke Paddock in the “blood round”).

“I was lacking the strength, especially when I wrestled up at 182 during my sophomore year,” he said. “After that, I definitely hit the weights hard and got bigger.”

And so although he planned to move up several classes to 220, he said he felt confident that he would have a smooth transition.

As a junior, Wolcott was 34-0 entering the New York State tournament, with some big wins, including an 8-3 triumph over Windsor’s Matt Abbott. [Abbott moved up to heavyweight and won the state title there].

As the three-seed at the Times Union Center, Wolcott breezed through the first three rounds, with each of his matches ending in a second period pin.  That brought him to a title clash with Hornell’s Zack Bacon, an unbeaten wrestler who had made the championship bout the previous year as well.

“I wanted to be a state champion – that was my goal at the beginning of the year,” Wolcott said. “I was pretty dominant on my feet.  I haven’t been taken down since my sophomore year.  I worked with my coaches really hard on top, on some good pinning combinations and I was able to get a lot of pins.  But I fell a little short in the finals.”

Bacon picked up a 1-0 decision and the state crown with an escape being the difference.

“He was defensive on his feet and was able to score off bottom,” he said. “I couldn’t hold him down and that’s what cost me. I took some time [afterwards] and recouped. I was pretty upset and wanted to get a little break.  It was probably about a week without wrestling, but I still hit the weights.”

And then he returned to action in another high profile event – the NHSCA Nationals in Virginia Beach.  Things looked pretty similar early on, as Wolcott racked up falls in his initial three bouts.

“I pinned my way into the semis and I had the kid beat in the semis, but I made an error and at that level, little errors can cost you,” he said. “I battled back but then lost to a kid I beat before and took fourth.  It was definitely a good experience – a lot of great wrestlers and it helped me get better.  I’m a pretty small 220 and I saw that you always need to stay in good position – you can’t make mistakes in big matches like that. It got me ready for this season.”

It wasn’t the only thing that prepared him, however. Although he also plays football, Wolcott said he wrestles year round.  He credits his brother Justin Wolcott, a 2007 NYS placer and his coaches Charlie Hughes and Devin Whitman for his progression.

“I wrestled some summer tournaments with my brother.  He trains me hard – he’s pretty much my coach in the offseason,” he said. “It’s good because he’s still pretty active in wrestling. He loves wrestling and follows it a lot and helps me keep my head in the matches.”

Most of the matches this year haven’t lasted very long.  In fact, only six of his 32 bouts have reached the second period.  He’s 32-0 with 26 pins, four forfeits and only two regular decisions.

“I feel like the year has gone the way I thought so far,” he said. “A lot of the positions I worked on in the summer have popped up. I’ve progressively gotten better and have been getting ready for that state tournament.”

It all comes back to the state tournament.  Wolcott said he began the season with goals of winning it all at the Times Union Center and then capturing a national championship afterwards.

He’ll likely enter the event in the state capital as a solid favorite in Division II.

“It’s always a tough tournament and I know there are a lot of good kids,” he said. “I just have to keep my mindset on one match at a time now, with only a few left.”

After that, Wolcott isn’t sure of the next step.  He said he wants to wrestle in college, but where he chooses to go has “a lot has to do with how the state tournament goes.” However, he did mention significant contact with Buffalo and admiration for the recruiting class that head coach John Stutzman and his staff have put together at the MAC institution.

One thing’s for sure.  Wolcott will stay involved in the sport he’s been part of for so many years.

"I think wrestling brought my family closer," he said. "I have to thank my brother and my parents for all the time and money they’ve put into it since I was four years old.  I don’t think I’ve given them enough credit. It’s a sport that I will definitely give back to – it’s important to get the younger generation in there and help to grow the sport in the future. It's been so good to me - I have so many great memories from wrestling."

He'll soon be on his way to Albany and Virginia Beach to make even more great memories.

Mad Max remains at the top of the Class of 2023 Rankings! Not far behind and narrowly closing that gap is training… https://t.co/efrc61poJ9