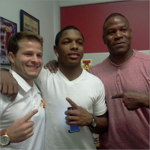 Rodriguez-Spencer after committing to ISU

Renaldo Rodriguez-Spencer has made two straight appearances in the New York state finals.  Unfortunately, he might not have that opportunity in 2014.

On Thursday, Todd Rodriguez-Spencer, Renaldo's father, informed New York Wrestling News that the Iowa State-bound grappler was injured at the ECIC tournament and although he was able to finish that event (and pin all four of his opponents), the injuries have worsened and "it looks like he is out for all postseason."

"He has been banged up all season, dealing with injuries that sidelined him at Fargo," Todd Rodriguez-Spencer added. "It's really disappointing, because he wanted to finish strong. But it would be more disappointing if he didn't accomplish his goals of winning a state title and getting a college scholarship.  Fortunately, he was able to do those things.  He's put in so much hard work, in wrestling and in academics, where he is on the honor roll."

The Cheektowaga star, who is ranked at #1 at 145 pounds in the Empire State, was having a dominant, undefeated campaign, as he did in 2013 when he followed up his first NYS championship with a national crown at the NHSCA tournament in Virginia Beach.  According to his father, he is hoping to return to the latter event to defend his title there.

"Hopefully he is healthy for Senior Nationals in Virginia Beach and FILA Juniors Nationals in Las Vegas in April," Todd Rodriguez-Spencer said. "He has goals to win those too before he goes to college."

To read about Rodriguez-Spencer's college decision from the fall of 2013, see this link.