College Recap: Lots of Action Around the State on Super Bowl Weekend 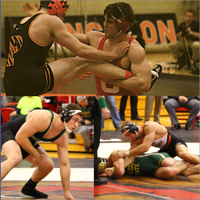 The winner of the Cornell vs. Penn dual has gone on to take at least a share of the Ivy League title every year since 1986-87.  Of course, for the past 11 years that team has been the Big Red.

There have been some close, back-and-forth duals between the two teams over the years, but Saturday's contest wasn't one of them as Cornell swept all 10 bouts on the way to a 32 to -1 victory.  Yes, that's right, Penn ended up with -1 on the scoreboard as the squad was deducted a team point during the competition.

Nahshon Garrett began the day with a major decision over Caleb Richardson at 125, with Chris Villalonga adding more bonus points with a major of his own at 149 against former NY high school star Andrew Lenzi.  There were two battles of ranked wrestlers, with Cornell's Dylan Palacio besting Casey Kent by a 4-2 tally at 165 and Gabe Dean defeating Lorenzo Thomas at 184.

The Quakers notched just one takedown in the entire meet.

For more on that dual, see here.

Mike Nevinger didn't yield a single point in either of his wins on Saturday, while Villalonga completed a 2-0 day with a victory over NCAA qualifier Adam Krop.  All of the wrestlers mentioned above went unbeaten during the two duals, as did Jace Bennett, who defeated two solid opponents (Frank Mattiace and Abe Ayala) at 197.

The Bearcats Storm Back to Beat Boston

After five bouts, Binghamton trailed Boston University 15-4 at home on Sunday.  But the Bearcats came back in a big way, winning four of the final five contests, including three bonus victories to nab a 23-18 triumph.

Caleb Wallace began cutting into the 11-point deficit when he recorded a fall at 184 pounds.  Cody Reed kept things going with a major at 197 and Tyler Deuel picked up another fall at heavyweight to put the Bearcats in the lead for the first time.  David White then clinched the dual with a decision over Bubba McGinley at 125 pounds.  Also getting his hand raised for Binghamton was Joe Bonaldi, who had a major at 149.

Army took fourth at the All-Academy Championships in New London, Connecticut over the weekend, led by champion Samson Imonode (184 pounds).

Imonode went 3-0, including a 2-1 win over Air Force's Devin Hightower in the title bout.

Also making the finals for the Black Knights were Brian Harvey (174) and Bryce Barnes (197), who both placed second.  Earning bronze finishes were Tyler Rauenzahn (141), Paul Hancock (157) and Chandler Smith (165).

Lock Gets a Victory, But Edinboro Defeats Buffalo

Edinboro captured a 41-3 victory over Buffalo over the weekend, taking nine of the 10 bouts.  Picking up a win for the Bulls was 184-pounder Tony Lock, who notched a 5-3 decision over former Frewsburg star Nick Mitchell.  New Yorkers who won matches for Edinboro included Johnny Greisheimer (Wantagh) at 157 and Ernest James (Longwood) at heavyweight.

Two teams that boasted national champions in their respective divisions in 2013 - Ithaca College and Nassau Community College - squared off on Friday night.  The Bombers collected a 33-9 win, fueled by a number of bonus point victories - by Jimmy Kaishan (forfeit at 125), Alex Gomez (major at 133), Carlos Toribio (major at 174), Dan Glinko (pin at 184) and Shane Bartrum (major at 285).

Delaware Valley edged Ithaca on criteria later in the weekend.

Nassau also took on Cortland, with the Red Dragons winning 40-4.  Recording pins for Cortland were Brian Bistis (149), Lou Puca (174) and Lance Moore (285) while Paul Fields picked up a forfeit at 125 and Joe Giaramita registered a major at 197.

Kyle Wade got Nassau on the board with a major at 157.

Niagara and RIT Also Come Out on Top

Niagara County Community College won a dual against a New York squad, topping Jamestown CC 46-6, according to the NCCC site.

Alfred State was victorious at 125, 165 and 184 (wins by Austin Keough, Konnor Kremer and Connor Fox, respectively).

As always, send in more results to newyorkwrestlingnews@gmail.com.