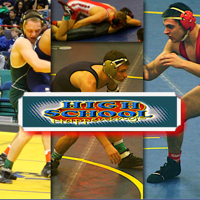 It's hard to believe how quickly the end of the season is approaching.  This weekend featured tons of competitions that were more exciting than the Super Bowl, including league and dual meet championships.  Take a look at some of the things that caught our attention over the past few days.

Head coach Paul Gillespie's squad began with dominant victories over Calhoun and Seaford in the opening two rounds, bringing about a matchup with a powerful Locust Valley squad.  Earlier this season, Locust Valley earned a 31-29 triumph over Wantagh, however, this time the Warriors turned the tables with a 41-32 result.

In the first battle between the two squads, Jonathan Gomez won the 99-pound clash with Jonathan Loew.  But this time, it was Wantagh's Loew picking up three points at the lightest weight class.  A few other key victories for the Warriors included Joe Hill over Hunter Dusold at 120 and Matt Langan over Michael Dusold at 145.  In addition, Kyle Quinn, Blaze Kavanagh, Nick Vines, Nick English and Alex Kaufman all collected six points in the winning effort.

That set up a semifinal appearance against Massapequa, which Wantagh captured by a 39-34 tally.  And in the title bout, the Warriors topped MacArthur 43-28.  Bonus points in the lightweights were crucial, as Justin Vines (99), Loew, Quinn, Hill and George Albert (126) all nabbed either pins or technical falls.  (Pat Smith also had a pin at heavyweight). In addition, the defending state champs picked up two key overtime wins over tough opponents - by Langan at 145 over Justin Cooksey and by Vines at 160 over Sal Randazzo.

The Hilton wrestling team has won a number of tournaments this year . . . and the squad added another over the weekend at the Pete Rao Memorial Tournament at Lewiston Porter.

Yianni Diakomihalis of the Cadets continued his season-long dominance with three pins in under a minute, followed by a technical fall in the title match. That was a similar path to that of Vincent DePrez, who registered four pins and then a technical fall in the 145-pound finals.  Vincent's twin brother Anthony also struck gold, with an impressive 6-3 victory in the 152 pound championship bout over Lewiston Porter's Ryan Kromer.  Those two were ranked #2 and #3 in our latest state rankings.

Those weren't the only titlewinners for Hilton, as Austin Hertel (113), Mike Spallina (160) and Harald Juergens (170) all won their brackets as well.

The Most Outstanding Wrestler, Anthony Orefice of Lockport, beat fellow NYS ranked grappler Kellen Devlin of Amherst for the 126 pound crown. Both eased their way to the finals, with all pins or tech falls and in the championship round, Orefice came out on top 4-1.

That wasn't the only showdown of Section 6 standouts. Dakota Gardner of Fredonia topped Andrew Shomers of Lew Port at 138 by a 3-1 score. (Gardner suffered his only loss of the season to Shomers, but has beaten him twice since). On his path, Shomers nabbed a quality win over state qualifier Louie DePrez of Hilton, 6-3.

Orefice was joined by several Lockport teammates on the top step of the podium.  Mitch Seaver racked up bonus points in all of his matches on the way to the 99 pound title, while Dylan Nuhn went all the way at 195 and Marshall Taylor compiled three pins and a 13-0 major at 220.

Alexander featured a pair of champs - Nick Gaiser at 120 and Kelsey Patten at 285, while Jason Vranic of Niagara Wheatfield (182) and John Freda of Williamsville North (132) also picked up first place.

Leading the way for Burnt Hills were upperweight MOW Jake Ashcraft (170) and the Champion of Champions Joey Butler (145).  They were joined by teammate Nate Sisler, who grabbed gold at 160.

Also earning individual honors was lower weights MOW Brandon Lapi of Amsterdam, who breezed through the day to win at 138.

One of the most anticipated bouts of the tournament came at 113 pounds, where the grapplers ranked fourth and fifth in the last state rankings, Johnny Stramiello of Pine Bush and John Arceri of Huntington, met in the title bout. Stramiello notched a 5-3 decision.

Other wrestlers mentioned in the last set of rankings also captured championships in Albany over the weekend - Kyle Mock (99) and Anthony Puca (220) of Huntington, Nick Gallo (182) and Marcus Ramundo (285) of Schalmont and Matt Morris of Albany Academy (120).

North Rockland captured the Section 1 (large school) dual meet championship last week with a victory over Fox Lane.  The good results continued for the Raiders with a championship at the Rockland County tournament, as they finished more than 40 points ahead of second place Suffern. It was the sixth straight year as county champs.

Joe Dillon of Nanuet notched a dramatic victory at 120 pounds and was honored as the Most Outstanding Wrestler.  Also taking titles were James Giraldez of Nyack at 145 and Clarkstown South's Austin Maurer at 195.

Last week, General Brown bested South Jefferson at the Section 3 Dual Meet championships. This weekend, the tables were turned as SJ finished atop the standings at the Frontier League tournament, a spot ahead of the Lions.

Cormac Green of Port Byron (132) and Evan Salmonsen of Hannibal (99) were the Most Oustanding Wrestlers and both had teammates win titles as well.  For Port Byron, Chris Pinckney continued his outstanding campaign at 182, while Mike Murray grabbed gold at 220.  For Hannibal, Tyler Wyman and Greg Hadcock were consecutive champs at 152 and 160.

Tioga nabbed the second slot, led by five silver medalists and champ Jesse Manuel (138), who had two pins and a major at the event.

Two other teams had multiple titlewinners - Watkins Glen (Brandon Gould at 113 and Ian Chedzoy at 182) and Candor (Freedom Boda at 152 and Tyler Hallett at 285).  Gould nabbed MOW accolades for the lower classes.

While stars William Koll and Ryan Wolcott didn't take the mat for Lansing and Waverly, respectively, their squads did have champions as Greg Lee won at 132 for the Bobcats while Brandon Ellers captured the 170 bracket.  Ellers was the upperweight MOW.

Johnson City Finishes on Top at the STAC Championships

But the Wildcats bounced back extremely well, taking the title at the STAC (Southern Tier Athletic Conference) championships, ahead of runner up U-E.

Taylor, Bidwell and Williams all had bonus victories in the finals, while Zach Colgan had a 6-0 decision over Ithaca's tough Ian Van Valen. Isiah Colgan lost to U-E's Mikey Carr a week ago, but turned that result around with a one-point victory.

Norwich's Tristan Rifanburg was named MOW after his 8-3 triumph over fellow state placer Curtis Grant of Elmira.  Rifanburg was joined atop the medal stand by teammates Frank Garcia (152) and Dalen Geislinger (99), who captured their crowns by major and pin, respectively.

Pat Carlin of Vestal continued his perfect season by beating returning state qualifier Andrew Brinser of U-E at 220, while his teammate Derek Osman also came out on top at 113.

Richie Burke of Ithaca (two falls and a major at 126), Blake Abbey of Corning (106) and Zak Garrehy of Maine-Endwell (145) were champions as well.

Two top 20 NYS teams squared off on Saturday in a Suburban Council League showdown. Columbia defeated Shenendehowa 38-31, bringing the squad's dual meet record to 32-1 for the season, according to coach Anthony Servidone.

Johnny Devine picked up a major decision over Dietrich Hartman in a matchup of returning Section placers.  Shen grapplers ranked in the state, Jesse Porter and Levi Ashley, both notched pins for the Plainsmen, as did Jordan Maynard and Kevin Guardino.  Meanwhile, Kevin Parker earned a major decision.

A pair of Suffolk County teams traveled to Section 9 and impressed with undefeated records at the Newburgh Duals.  Both Hauppauge and Shoreham Wading River recorded wins over the host school, plus Port Jervis, Valley Central, Wallkill and Warwick Valley.  In a few highlight bouts, Chris Mauriello of Hauppauge defeated NFA's Da'mani Burns (who was up a weight at 132) and SWR's James Szymanski topped Dylan Booth of Port Jervis in a clash of NYS ranked wrestlers at 120.

Deposit-Hancock captured the team title at the MAC tournament with a pair of titlewinners - Dean Raymond (99) and Dan Babcock (285) and four silver medalists.  Both Raymond and Babcock pinned their way through the event.

Taking the runner up spot was BGAH, which had four wrestlers earn gold and one nab second.  Two of them, Chris Cirigliano (106) and Jamie Griswold (145) notched all bonus wins.  Jacob Andrews (132) and Madison Hoover (138) also took titles.

Similarly dominant were the Walton duo of Logan Robinson (120) and Dylan Wood (126), who both racked up three falls.  Ryan Marszal of Unatego also pinned his way through at 170, as did Brian Ingram of Delhi at 195.  Dylan Gifford of Sidney picked up all bonus triumphs at 152.

One of New York's top 195-pounders, Nick Weber of Kings Park, earned a quick pin in the finals to capture that weight class.  His teammates Nick Forte and Joe Atkins won at 106 and 160, respectively, while Smithtown East had a pair of winners - James Trezza (99) and Will Outcault (152). Timothy Johnson (Harborfields, 120), Eduardo Ramirez (Amityville, 138) and Devin Doran (William Floyd, 220) also earned first.

St. Anthony's Continues to Rack Up Wins Out of State

St. Anthony's has wrestled in numerous states this season. This past weekend, the squad competed at the Connecticut Challenge and earned first place in a field made up of teams from Connecticut, Rhode Island and Massachusetts.

Taking second in the team race was Jamestown, which didn't have a champion, but did have six grapplers finish in the top four.

In a marquee bout, Kenmore West's NHSCA All-American Anthony Argentieri nabbed a 3-1 decision over returning NYS placer Ryan Hetrick of Southwestern at 113.  Several others who have been mentioned in the state rankings captured titles, including Freddy Eckles (Lake Shore, 126), Rocco Russo (Frontier, 138) and Alex Smythe (Eden, 160).

Riverhead was second, powered by MOW Eddie Matyka, who edged Bobby Pease for the 113-pound crown. Ryan Gevinski also won for the runner up squad.

Speaking of Kyle Fiske of Port Jefferson, the heavyweight had an overtime victory against Southampton's Peter Strassfield in a potential preview of the D2 Suffolk finals.

East Meadow's Adam Smith topped Locust Valley's Nick Casella in the Nassau Dual tournament (with Casella bumping up from his usual 120 pounds to take on the challenge).  Another highly ranked wrestler in NYS, Parker Kropman of Penfield, went up a weight to take on Xiaodi Chen of Webster Schroeder, who won in overtime.

Northport's Ken Gallagher kept his unbeaten season alive, according to the NWCA Scorebook, with a win over returning Section 11 runner up Erik Adon of East Islip at 170 pounds.  Adon was #1 in the last Suffolk County rankings.

Is that it?  Of course not.  Feel free to send us more results and highlights at newyorkwrestlingnews@gmail.com.