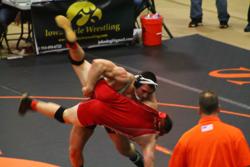 Reigning 220-pound Division I state champion Rich Sisti is a big presence in the Monsignor Farrell wrestling room, especially when he’s working with the Kids Club.

“It’s like puppies on a bulldog,” said former Farrell coach and current Brooklyn Tech assistant Jason Bross. “You should see these eight and nine year olds climbing on him.  He’s like a god to the kids and he wears that role like the champion that he is.  They’ll hang on his arm like he’s Schwarzenegger.”

“The kids try to gather up and tackle me,” Sisti added. “Some of them are really good at a young age. To tell you the truth, I really like teaching the kids and wrestling around with them.”

Sisti doesn’t just lend a hand in the room. Bross said Sisti is the first one to volunteer when he asks for assistance with things like an Autism Speaks walk.

“Rich is like a gentle giant,” Bross said. “Unless you’re wrestling him.”

That’s certainly true, as he hasn’t shown a lot of kindness to those who line up against him on the mat.

Since the beginning of his junior season, Sisti has gone undefeated with more than 50 wins, including a New York State championship, a CHSAA crown and a gold medal at the Eastern States Classic.  Fewer than 10 opponents have managed to stay within a regular decision.  And, it’s been quite some time since he yielded any offensive points.

“Not only has he not lost since his sophomore year, he hasn’t been taken down since his sophomore year either,” Bross said. “It was Gage Harrah, a nationally-ranked wrestler who did it at FloNationals. His head and hands defense is so good, very few guys have even gotten to his legs. I don’t think anyone has held him on bottom for more than 10 seconds, either.”

That’s part of the drastic improvement Monsignor Farrell co-coach Rob Pavis said Sisti has achieved over the past year.

“Richie was good last year, but it’s funny – he’s 100% better this season,” Pavis said. “In the past, I would be able to wrestle him in practice and even though I’m lighter, I would keep it close or beat him. Now, I just can’t.  He has great positioning and it seems like he’s faster and stronger.  No one holds him down and he’s way better on top.”

So the takedowns have stopped even in practice?

“I try to get him and I think I caught him once or twice this year,” Pavis said. “But it’s not easy.  I’m not getting younger – it takes me three days to recover after I wrestle him.”

Sisti agreed that he's made significant progress in the room.

“Coach Pavis really pushes me,” he said.  “It used to be – no matter how tired I was, he kept beating me up. Now, I’m returning some of that.”

Sisti talked about a number of others who have helped him advance in his training, including 2013 Farrell graduates (and All-State wrestlers) Matt Roberts and Andrew Psomas.  In addition, Ursinus grappler Christian Psomas also returned to the room to help out even after graduating from the CHSAA institution.

“Christian would come back and beat the crap out of me,” Sisti said. “I got tired of him beating up on me and developed better skills.  I fought back harder.  I also work with [Division III National Champion and former Hofstra and Army coach] Terry Madden once in a while. Getting the experience with a top level guy like him is great.  He has so much knowledge to teach me – I love working with him.”

And all the work he puts in, both on the mat and in the weight room (where he said he pushes his body to its limit on a daily basis), is paying dividends.

“He just continues to get better. Right now, I think he’d be a threat in college," Pavis, who wrestled at Buffalo, said. "I think he could win 25 matches in college right now.”

He’ll have the opportunity to make an impact at the next level soon enough, likely as a heavyweight. The ‘A’ student is in contact with schools such as (alphabetically) Brown, Columbia, Maryland, Michigan and Penn and he said he will take most of his visits after the season ends.

“He might have to change his style a little for heavyweight, but I think he can do whatever he wants," Pavis said. "He cuts the corner quick, he’s really good with sweep singles.  He has such great athleticism, a very high wrestling IQ and is extremely coachable. A guy like that is tough to beat - someone who has speed and athleticism to go with all that muscle.”

‘All that muscle’ is something that jumps right out at those who watch him. In fact, according to Bross, the mother of one of Sisti’s opponents at the Times Union Center complained that her son had to wrestle "the guy that looks like an action figure.”

“I just smile when I hear things like that,” Sisti said. “I just shrug it off – it’s just another thing people say about me.”

He said it’s nothing new.

“We were already calling him ‘manchild’ in seventh grade,” Bross said. “His dad’s a big guy, his brother’s a big guy.  He had that gift from his family.  He weighed about 195 as a freshman and in spite of how much he lifts, he’s gained only 15 pounds over the last few years.  He’s always been a physically mature talent, blessed with genetics.  But he also outworks everyone.  He works extremely hard.  There’s weightlifting strength and wrestling strength.  Sometimes massive muscles don’t translate to wrestling power.  Let me tell you, he has wrestling power.”

He demonstrated that at the state tournament in 2013, an event that Pavis called "the first breakout performance for everyone in New York to see."

Sisti had gone 1-2 at the Times Union Center as a sophomore at 195 pounds and an injury kept him out of action at the 2013 Eastern States Classic.  So, although he came into the biggest event of the year undefeated as a junior, he wasn’t seen as a title favorite by many.

However, those affiliated with Farrell thought otherwise.  In fact, after our New York Wrestling News tournament preview, Bross told this author that Sisti would prove that our 220 pound pick to win it all (Huntington’s Nick Lupi) was wrong.

“Let’s put it this way,” Pavis said. “[Co-coach] Phil [Squatrito], J [Bross] and I didn’t think he would win; we knew he would win.  I said I’d bet my house on it.  I didn’t tell Richie that and I would never have put that kind of pressure on him.  But we scouted the other guys and felt confident he’d beat them all.”

“I definitely felt confident,” he said. “I know in practice, I had Matt Roberts and Andrew Psomas to wrestle with and they were faster than the 220 pounders. They weren’t even touching my legs, shot-wise, so I felt like I was almost unstoppable on my feet.”

It looked that way, as he opened with 5-1 and 7-1 victories before topping the aforementioned top seed (and returning third placer) Lupi in the semis by a 3-2 score to punch his ticket to the finals.

After that bout, he was told it was time to leave the arena to relax before the championship match, but he refused to do so, saying it was more important to stay as Psomas and Roberts competed in the medal rounds.

“They were my teammates and almost like brothers to me,” Sisti added. “I didn’t feel like it was right to go back – I had to support them. They’re pretty much my family.”

Later that night, it was time for the other Farrell wrestlers to root for Sisti in the title contest against Steven Mills of Sachem North.  Sisti came out with a quick takedown and after six minutes on the mat, earned a 3-2 triumph and a state crown.

“Richie did what he had to do,” Pavis said. “He could’ve opened up a lot more, but he kind of shut down after he scored because he knew he wasn’t getting scored on.”

So, Sisti earned a state title -- the first ever NYS championship for a Monsignor Farrell wrestler.

“It meant a lot to win the first one [for Farrell],” Sisti said. “But it didn’t really hit me until the next day.  I was just so tired after the match. I went over to my coaches to hug them and barely had power or strength to even hug them.”

They did manage to celebrate the victory, however.

“It was great,” Pavis said. “It was a big deal for Richie and for our team.  We never had a state placer until [former Army NCAA qualifier] Connor Hanafee took sixth in 2009.  That was big.  Ever since that year, we’ve had at least one guy place at the state tournament.  It was almost like a mental block.  Now, with Richie winning, it breaks another mental barrier for future guys on our team.  It was really exciting and in some ways a relief.”

Those feelings were no doubt mirrored by Sisti and his family.  Their resolve was tested throughout the year as they dealt with the effects of Hurricane Sandy, which displaced them from their house.

“That definitely was a huge impact on my life,” Sisti said.  “Everything that was going on with that – I added it to the furnace and just used that to inspire my wrestling. It gave me a little bit of anger and that probably fueled me towards winning the state tournament.”

Now, he’s focused on some new challenges.  He said his #1 goal is to become a national champion, something he’ll aim to get done at the FloNationals.  [He came within one win of placing at that event as a sophomore at 195].

And that’s not all.

“My goal is to not only win the state tournament, but to pin my way through it,” he said.

To do that, Sisti said he’ll have to improve his stamina, after winning three of his five matches by fall on the way to the Eastern States title in mid January.

Whether he racks up falls or not, his coaches fully believe he'll get the job done in Albany.

“Do I think anyone will beat him in New York State?” Pavis asked. “No, I really don’t.”

If he earns gold again, he will achieve another ‘first’ – becoming Farrell’s initial two-time state champion.

“People want to talk about some of the ‘firsts’ that Rich has achieved,” Bross said. “But I don’t think that does him justice.  He’s just special in so many ways.  It’s hard to find the right adjectives. He’s strong, but not just physically – he’s an honorable young man who keeps to his convictions and has great inner strength and a great family.  I don’t know where he’ll choose to go to college, but I’ll tell you this; someone will get a winning lottery ticket.”

The Annual Grappler Fall Classic is set to go down this weekend and after a 1-year hiatus, returns to the great sta… https://t.co/X1CnOMTr1I