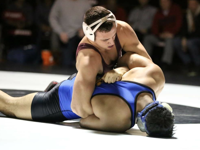 Nick Weber looked up from the paper he just finished signing, threw his fist in the air and yelled, “Yeah, Lehigh!”

Surrounded by his teammates at Kings Park, Weber showed his excitement about the college decision he had just made official.

“I wanted a school that had a good balance between education and athletics,” Weber said. “I felt that Lehigh was the best option.”

The 2013 All-State wrestler strongly considered the Naval Academy, as well as Binghamton, Buffalo and the Merchant Marine Academy.  However, a visit to the Bethlehem, Pennsylvania campus helped to solidify his choice.

“The wrestling complex was amazing, one of the nicest I’ve ever seen,” Weber said. “The coaches are great people and the wrestlers were so welcoming.  They did a good job showing me around and giving me the experience of what Lehigh would be like.”

That’s an experience he looks forward to beginning.  And he’ll do that with a number of other New York natives, as Jimmy Carucci (Shenendehowa), Zach Diekel (Whitehall), Ben Haas (Salamanca), Drew Longo (Ardsley) and Austin Meys (Shenendehowa) are all on the Mountain Hawk roster.

Being among top Empire State grapplers is nothing new for Weber.  Last year, he handed eventual state champion Dan Choi of Syosset his only loss of the season at 195 pounds when he pinned him in the first period.  And on his way to fifth place at the Times Union Center, he defeated the #2 seed, Colton Kells of Fairport in the second round.  His next match, however, was against Shenendehowa’s Levi Ashley and the Section 2 grappler came away with an 11-8 decision.

Weber went all over in the offseason, from the Disney Duals in Florida to Fargo. And while he believes those events exposed him to high level competition and helped him improve significantly, he said what stood out to him most was a 5-3 win at the Iron Horse Invitational in New Jersey over the 2013 NYS runner up.

“After I lost to Ashley in the state semifinals last year, I was happy to get another chance,” Weber said. “Winning that match at the Iron Horse made me that much more excited for the end of the year.  I’ve put in a lot of offseason work to make sure that this year ends differently than last year.”

So, the wrestler who was on the junior varsity as a freshman and took fourth in Suffolk as a sophomore is ready to take on all challengers in Albany.   He credits coaches Clark Crespi, Jack Magnani, Bryan Lopolo, Dean Morrison and Vougar Oroudjov for helping him get to this point.

And now he hopes he’ll arrive at Lehigh after capturing a NYS title in his senior campaign, the same way Diekel, Haas and Meys did.

“My goal is to be an undefeated state champion,” Weber said. “I definitely feel confident.  The state tournament is anybody’s to win.  I just want to stay on the gas pedal and do everything I possibly can to make sure I’m the one standing on top of the podium.”