After mega-win over Ruth, Lowell native reflects on the past and looks towards the future 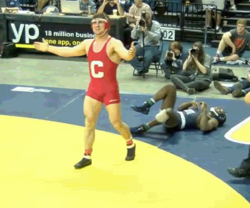 Dean after his win ove Ruth at The Scuffle.

CHATTANOOGA, TENN. – As he walked off the mat after securing one of the biggest upsets in recent NCAA wrestling history, Gabe Dean's coach, Damion Hahn, turned to his talented freshman and said “Sure you're not a football player?”.

A strange question directed to the Cornell University wrestler who had just beaten two-time defending National Champion Ed Ruth of Penn State 7-4 in the 184-pound finals of the Southern Scuffle at the University of Tennessee Chattanooga on January 2, but one asked after all his matches so far in Dean's young collegiate wrestling career.

Now remember, this is the same Ruth that came into that match riding an 84-match winning streak, but a fair question to ask considering the circumstances that surrounded Dean coming out of high school, because Dean had a much more impressive football resume coming out of Lowell (Mi.) High School than he did a wrestling one.

After all, Dean was a two-time all state quarterback, who led the Red Arrows to three state finals, winning one during his sophomore season.

Dean scored over 60 touchdowns in his three years as signal caller of Lowell, and was named the AP Player of the Year in Division 1-2 after his junior season.

On the mat, Dean had a good high school career, winning a state title as a junior, and a runner-up finish as a senior, but wasn't considered one of the top recruits in the nation.

So coming out of high school, Dean made the huge decision to pick wrestling at Cornell, a top 10 Division I program, over playing football, a sport where he excelled even more in than he did on the mat in high school.

And Dean questioned that decision during his first year in Ithaca, NY, where he wrestled as an unattached wrestler for the Finger Lakes Wrestling Club.

“My first Open last year, I was so nervous because it was my first college tournament, and I went 0-2 at the Buffalo Open, which isn't the biggest tournament, but still a college tournament and they were tough kids I wrestled, but I went 0-2,” Dean said “I remember calling my dad (Lowell wrestling coach Dave Dean) on the ride home and saying, 'Dad, wrestling isn't for me, I'm going to play football here at Cornell.' He said, 'You are just emotional, give it one more week, and if you still hate it, we'll talk.' I just said, 'OK, but I'm just not a wrestler.'.

“My coaches caught on to that story so every time I come off the mat, Damion Hahn pats me on the back and says, 'Sure you're not a football player?”,” he added. “I'm glad I stuck with it.”

“I think he was a top 100 recruit in wrestling, but not a highly recruited wrestler,” Hahn said. “We weren't sure of his plans, we thought he would play football. But his dad said he was going to wrestle, and we said lets make this happen.”

And boy are the Big Red coaches making it happen.

It started last year when former National Champion Cornell wrestler and fellow state of Michigan athlete Cam Simaz coached him after he deferred his first year at Cornell and wrestled for the Finger Lakes Wrestling Club.

And it's continued this year with Hahn and the rest of the Cornell coaching staff.

“He has all the intangibles to do great things,” Hahn said. “Is he going to win it all, I won't say yet. But he has one of the main things, and that is work ethic -- that never-say-die attitude that is hard to teach. The technique is easy to teach, it's that will to improve and win that is hard to teach, and he has that part taken care of.”

But that will wasn't always there is full force.

As a freshman at Lowell, Dean was stalled out in a key match against Tyler Fuller of Greenville, one of Lowell's main rivals in West Michigan.

It was a loss that cost the Red Arrows, and one Dean said that was a turning point, not only in his wrestling career, but in his athletic career.

“I think every great competitor needs to get embarrassed in their lives,” Dean said. “Then they can either hang their head and don't learn anything from it, or the go all right, I have to fix some things and get better. And I think that was exactly what that was.”

That happened earlier this year when Ruth pinned Dean at the Binghamton Invitational in early November.

In an interview the day after Christmas, when Dean, who was ranked sixth at 184 at the time, was back in Lowell for the holidays, and a week before the Southern Scuffle, Dean examined that loss, one of two this year he has suffered.

“He caught me in that cross-face cradle and pinned me,” Dean said. “I learned in that match you cant put your weight forward on bottom because he has those freakishly long arms. And once that is locked up, it is pretty hard to get out. So I learned a lot from that match, just to get a feel what kind of wrestler he is, which is great for me, because hopefully I will have another opportunity to wrestle him at the Scuffle.”

That's what has Hahn, Simaz and many Big Red fans anxious to see what lies in store for Dean.

“I'm exited to see what happens the next four years,” Hahn said. “Where he is right now is far beyond where a freshman is, as far as control with nerves. That has a lot to do with his background. Two of the most stressful positions in sports are major league closing pitcher and quarterback, and him being great quarterback in high school, and being the high-stress spots he played in, those have helped him.

“He just went out and beat one of the most dominating wrestlers in years,” he added. “He put a great match together and beat arguably the best pound-for-pound wrestler in the country.”

“Gabe is a machine,” he said. “He out-works everybody. He is only a freshman, and he will get a lot better. I'm very proud of him, but that's only the Southern Scuffle, and he still has work ahead of him.”

Dean says bring it on, and welcomes the work he gets in the Cornell room from the likes of Hahn, Simaz and four-time champion Kyle Dake.

“My goal is to never stop improving,” Dean said. “There are so many things I can do better in a lot of my matches.”

For one night in Tennessee, there wasn't a lot more he could have done better!