Some Final Thoughts on Great Matches at the U-E Duals 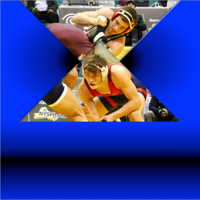 A big roar erupted in the gym at Union-Endicott High School when the last match of Monroe Woodbury’s championship victory over Shenendehowa was completed.  More on that victory can be found at this link. But that was just one of the many times it got very loud over the weekend.

Both semifinals bouts were thrilling, coming down to the last match in both cases.  After Rocky Point’s 99 pounder Nick Pagnotta gave his team a 32-30 advantage in a dual that began at 126, Monroe Woodbury won the last three bouts to secure the 39-32 triumph.  And when that one was over, the decisive 120-pound match between Hilton and Shenendehowa was still in progress on the other side of the room.  In an action-packed, back-and-forth affair, Shen’s Kevin Guardino came out on top 13-9 to knot the scoreboard at 36.  The Plainsmen took the victory by criteria.

While Brockport and Johnson City didn’t finish in the top bracket, the dual between them on Saturday made for an electric atmosphere.  It didn’t look like that would be the case at first, as the Section 5 school got out to a huge 33-7 advantage after 152 pounds. (The dual started at 99).

But Johnson City got back into the swing of things in a hurry, with four consecutive falls by Zach Colgan, Dominic Taylor, Nick Bidwell and Reggie Williams to narrow the score to 33-31 with just two contests remaining.

Fittingly, the crucial 220-pound match between Josh Dember of Johnson City and Cameron Caldarelli of Brockport went to overtime (tied at 1 apiece).  It was Calderelli who got the escape in the extra session to give his team a 36-31 cushion.

So, it came down to heavyweight, where a pin would give the Section 4 school a big comeback victory. Johnson City’s Nikola Cejic came close to making that a reality.  In the second period, he secured a reversal and three near fall points and had Ryan Mattison on his back for quite some time.  However, the Brockport heavyweight showed a lot of fight, refusing to give up the fall.  So while Cejic continued his successful campaign with a 6-1 victory, Brockport held on to win an exciting dual by two points.

In addition to a number of meets coming down to the wire, there were several outstanding individual matches pitting some of New York’s best against one another.  Here were just a few that stood out to us:

138 Pounds: Justin Cooksey (MacArthur) is certainly an accomplished wrestler, as he was a state finalist in 2012.  After not competing in Albany last season, Cooksey looks like he could be ready to make his mark on the postseason again after capturing victories over returning state qualifiers Lou DePrez of Hilton (by major) and Mike Raccioppi of Minisink Valley.  Raccioppi had some good performances over the weekend as well, including a win over All-Stater Matt Caputo of North Rockland.  There were a lot of tough wrestlers at this weight.  Kevin Parker of Shen looked very dangerous, while Rocky Point's James Matias also had a win over a state qualifier.

145/152 Pounds:  The #2, 3 and 4 wrestlers at 145 pounds in our last state rankings took the mat at Union-Endicott (Vincent DePrez of Hilton, Joey Butler of Burnt Hills and Tommy Dutton of Rocky Point).  DePrez met Dutton in the third place meet, picking up a 5-0 decision.  Meanwhile, Butler, a bronze medalist in Albany in 2013, pinned Dutton and another ranked wrestler, North Rockland’s Blaise Benderoth (at 152).  Dutton also got a victory over Benderoth by fall.

In the semifinal clash between Hilton and Shenendehowa, two grapplers ranked at 152, Anthony DePrez of the Cadets and Jesse Porter, bumped up to 160 pounds to face each other.  DePrez was the victor by 6-2 decision in a dual in which every point turned out to be critical.

[Speaking of Hilton, it's always a treat to watch the nation's #1 106 pounder, Yianni Diakomihalis, although he spent very little time on the mat with three quick pins and a technical fall].

170 pounds: Steve Schneider of MacArthur, Jake Weber of Clarence and Jake Ashcraft of Burnt Hills were all in the top five of last week’s state rankings.  Schneider had a 4-2 decision over Weber last season, but this time, he recorded a major against the Section 6 standout in pool action.  In an exciting match later on, Weber got the “W” over Ashcraft on Sunday, 9-7.

To watch the replay of the live stream of Sunday's U-E action, go to www.newyorkwrestlingnews.com and scroll down until you see the video screen.