Off to the ACC: Fargo All-American Rafal Rokosz Chooses Duke 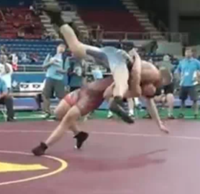 On Halloween in 2011, Rafal Rokosz decided to be a wrestler.

It may be hard to believe, but the Fargo All-American and future Duke grappler had never spent time on the mat before.

“I think Rafal tried just about every sport at school, from soccer to tennis,” said his head coach at Southampton, Lester Ware. “He kept searching until he found the right thing for him and then he went for it.   He just walked into open mats.”

He was directed there by Southampton’s last state placer, Julius Anglickas.

“One day I saw Julius in the weight room and I was impressed with what he was doing,” Rokosz said. “He told me that I should think about wrestling.  That’s why I gave it a try.”

It didn’t take long for Ware to see a little bit of Anglickas in the newcomer.

“Actually as soon as [Rokosz] walked through the door, I thought, that’s Julius Junior,” Ware said. “They have a similar build and are around the same height.  I thought pretty quickly that [Rokosz] could be very good.”

In his first year, Rokosz went 10-9 at 170 pounds, however, his coach said that mark is a little misleading.

“His record as a sophomore is deceptive because he lost a lot in the beginning, but then won a tournament and started getting on a roll,” Ware said. “But the week of the Division II sectionals, he fractured his ankle and couldn’t wrestle.”

So, he missed the first postseason of his career.  But when he was able to get back into action, Rokosz got to work with some tough training partners.

“One of the reasons I am where I am right now is because of my coach and my main training partner [heavyweight] Peter Strassfield,” Rokosz said. “If I didn’t have someone as strong and athletic to work with, I wouldn’t be able to train properly and develop my attacks the way I have.”

According to Ware, that work and the time spent with Anglickas has been crucial.

“Rafal had Julius all summer to work with,” Ware said. “And [Strassfield] pounded on him right away.  The two of them, they’re like peanut butter and jelly.  They get better together.”

The “peanut butter and jelly” of Rokosz and Strassfield showed that improvement in 2012-13, going a combined 55-6 and qualifying for the state tournament at 220 and 285, respectively.

So, just about 16 months after wrestling for the first time, Rokosz found himself competing at the Times Union Center.  He got out to a lead against Clarke’s Enndy Nunez before falling in a 7-5 setback.  He dropped a 7-6 bout to Holland Patent’s Josh Langley in the consolations to complete his first trip to the state capital.

“It was pretty nerve-wracking,” Rokosz said. “Being in front of that crowd – I was never on such a big stage.  I guess you could say I wasn’t able to focus as much because of the unfamiliar territory.  I learned about keeping calm and not getting distracted.”

“He hadn’t even been to Sectionals the year before,” Ware added. “He was definitely disappointed.  He was still very young and inexperienced.  That really woke him up.  He left [Albany] very hungry.”

Rokosz got a little bit of redemption at the New York State Freestyle and Greco championships in Binghamton, where he again met Nunez.  This time, he recorded a very quick pin.

"I was able to get my revenge in 30 seconds at the Greco states,” Rokosz said. “It felt good knowing I developed a lot.  That’s when I knew I could do something.”

He certainly “did something” at the National championships at Fargo, although Rokosz had second thoughts about even taking the trip to North Dakota.

“Initially, I didn’t want to go because I didn’t think I was good enough,” Rokosz said. “I talked to [Ware] and he told me that if I didn’t go, he would quit on me.  That I shouldn’t bother showing up next season.  I didn’t think he was kidding.”

“I knew he really was ready,” Ware said. “He’s really good on his feet. I told him he had everything he needed.”

Apparently, Ware was right.  Rokosz took sixth in Greco Roman to pick up All-American honors at 220.

“That was a great experience,” Rokosz said. “I wasn’t as nervous as I was for states.  I let loose and relaxed and ended up placing.”

And that wasn’t all.  Rokosz sought out top-notch competition in a number of other places, such as the Waterway Duals, the Iron Horse Invitational and the Super 32 Challenge.

“Every tournament helped me a lot in developing my wrestling,” Rokosz said. “I hit my weak points and focused on them.  Overall, it showed me that I could perform at this level of competition and I have what it takes.”

He now has his sights set on another podium, saying that his “#1 goal is to win the state title.”

Ware points to Rokosz’s attitude as one of the reasons he believes in the senior, who plans to be a heavyweight in college.

“He was so new to the sport, I didn’t have to unteach any bad habits,” the coach said. “He’s very teachable and has a really strong work ethic.  Even in the offseason, he always has ‘just one more question.’  Then, 30 or 40 minutes past the time we were planning to stop, we’re still there.  He had an instant love of the sport and a lot of curiosity.”

That curiosity and interest in learning applies in the classroom as well, where Rokosz is a 4.0 student taking Advanced Placement classes, according to the coach.  Rokosz considered Brown, Columbia, Franklin & Marshall and NYU before selecting the Blue Devils.

“Duke is a great school,” Rokosz said. “When I visited, everything felt right. It felt like a second family.”

In addition, Rokosz believes he will fit right in on the mat.

“Duke wrestling posts weekly videos on youtube,” Rokosz said. “A lot of the wrestlers use Greco-style moves.  I like that style, I do a lot of throws – not just all lower body attacks.”

“[Rokosz] felt that it was a place he could really develop,” Ware said. “He’s still pretty new and has a lot more development to go.  When he looked at the styles of the Duke wrestlers, he thought he fit in with them and their styles tremendously.  Of course, it’s a great school and it’s a beautiful campus – a great place to be.”

Not too long ago, Rokosz didn’t yet know that the wrestling mat was a great place for him to be as well.  Now, it’s a big part of his future.

“Rafal is a great kid – a funny kid with quite the sense of humor,” Ware said. “If you were going to build a team and had three kids like him, you’d be a state contender every year.  That’s the kind of person he is. He will make noise upstate this year.”

Updated Class Rankings - The Class of 2027. Twenty wrestlers in total, check out the complete list!!!… https://t.co/3cTvX9YYKI