Stories to Remember from 2013 - Looking Back at NY Wrestling 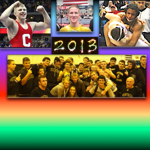 What were some New York wrestling stories and events to remember from 2013?  We could have written several articles on this topic, but here are some that stand out from the past 12 months.

Kyle Dake Goes Four for Four ... And Adds Some More

Every year of Kyle Dake's college career at Cornell was outstanding.  But his senior campaign for the Big Red made history and captured the attention of sports fans nationwide.  As many followers of the sport know, Dake became the third wrestler to win four NCAA titles and the first to ever accomplish that feat at four different weight classes.  His three one-point victories over Penn State's David Taylor were classics, including in the championship bout in Des Moines, in which Dake gave up a takedown for the first time of the season before showing his ability to come back.  His efforts earned him the Hodge Trophy, Sports Illustrated's College Athlete of the Year honors, an ESPY nomination and appearances on the Dan Patrick Show and other national news outlets. (For a inside look at Dake's career, see here).

And that wasn't all for the newest member of the Cornell coaching staff.  Dake began his international career in style, picking up the only win for the United States in a dual with Iran during the Rumble on the Rails event in New York City.  And then, at the World Team Trials, he ran the gauntlet, defeating Trent Paulson, David Taylor and Andrew Howe on the same day at 74 kg to win the Challenge Tournament.  That led to the finals series against Jordan Burroughs just a few hours later.  Burroughs dominated the first match, but in the second, Dake made adjustments and pushed the World Champion before falling in overtime.

In November, at the Golden Grand Prix Finals in Azerbaijan, Dake took fifth place against some of the top wrestlers in the world - and he did it with a fractured hand.

The four-time NCAA champion began with a 7-1 triumph over Ali Shabanau of Belarus, a 2013 World bronze medalist and followed with a 10-5 win over two-time World champion Denis Tsargush of Russia. He dropped his semifinal match and in the bronze bout, he lost on criteria to Azerbaijan’s former World bronze winner Ashraf Aliyev.

In his first big international tournament, Dake certainly showed his mettle, with quality wins despite a significant injury.  We'll see what the Lansing native can do for an encore in 2014.

Wantagh Wins . . . Pretty Much Everything

Wantagh racked up numerous big time trophies in 2012-13, including the Eastern States, the Union Endicott Duals, the Section 8 Dual and Tournament crowns and the New York State championship.  The Warriors also extended their dual winning streak to over 40 victories in a row.  NYS champion Kyle Quinn and a strong group of seniors (including Danny McDevitt, James Corbett, Chris Araoz and Vinny Turano) propelled the team, along with head coach Paul Gillespie, who was recognized by the National Wrestling Coaches Association as the National Coach of the Year.

Perhaps the loudest ovation during the Saturday morning placement rounds at the NCAA tournament in 2013 was for Columbia's Steve Santos, who took third place at 149 pounds.  Santos had a tremendous senior season for the Lions, capping off his career with a victory over returning NCAA finalist Dylan Ness in the bronze bout to earn the highest-ever finish for a Columbia grappler at Nationals.

It appeared that all wrestlers would wear their school colors at the state tournament in February of 2013 for the first time in recent memory after the NYSPHSAA Executive Committee decided in May of 2012 to eliminate Sectional uniforms for all sports.

Many New York wrestling fans were disappointed with the decision and over 1300 signed a petition started by armdrag.com's Tim Herman asking to revisit the issue.

That's exactly what happened.  In January of 2013, a 12-10 vote by the NYSPHSAA Committee reversed the previous decision, allowing the Sectional singlets to be worn at the Times Union Center.

When talking about the final vote, NYSPHSAA Executive Director Robert Zayas mentioned that "the passion in New York for wrestling and the strength and interest of the wrestling community” was impressive.

Team New York made history at Fargo, becoming the first squad other than California or Texas to win the Women’s Duals.  In appropriate fashion, the group captured the title by defeating the prior titlewinners, dominating the Texans in the first match of the championship bracket before topping the Californians, 39-17.

During that event, many wrestlers provided key performances.  Of course, that included a pair of individual national champions, Alexis Porter (148 pounds) and Rachel Hale (121 pounds).  Also going undefeated in the dual action was Rosemary Flores, an individual bronze medalist.  Additional strong contributors were Destane Garrick (a third placer), Kelsey Gray (who went unbeaten in the duals) and Alexis Bleau (the only woman to earn trophies in both the Cadet and Junior tournaments).

Speaking of wrestlers earning multiple All-American honors at Fargo, Shenendehowa's Jesse Porter was the runner up in Cadet Greco and took fifth in Freestyle.

Triple Crowns for a Stellar Quartet

It isn’t easy to earn the Triple Crown in New York, capturing state titles in folkstyle during the high school season and Freestyle and Greco Roman in May.  However, in 2013, four grapplers got the job done - William Koll (Lansing), Renaldo Rodriguez-Spencer (Cheektowaga), Kevin Thayer (Unatego) and Burke Paddock (Warsaw).  Thayer is now competing in college, however the other three have the chance to pick up even more hardware as seniors in 2014.

You can call Jason Goldman a World Champion . . . and a World Runner Up. The former Binghamton All-American captured gold at 58 kg at the Veteran Freestyle World Championships in Bosnia in October and silver in Greco Roman.  "Coach J-Gold", as he's called in Section 4, certainly came up golden this fall.

In the spring, New Yorkers brought a lot of hardware back home from the NHSCA Nationals in Virginia Beach.  In the senior competition, a pair of state champions - TJ Fabian (Shoreham Wading River/Sacred Heart) and Mike Hughes (Smithtown West/Hofstra) went all the way to the finals, with Fabian grabbing the championship at 126 pounds.

The list of national champs also includes several others: Connor Calkins of Alfred-Almond and Tristan Rifanburg of Norwich at the Freak Show in Las Vegas and Andrew McFarland of Carthage, Carter Schubert and Jayden Scott at the NUWAY Nationals.

Some very notable second place showings include Ward Melville's Nick Piccininni taking silver at the FloNationals in the spring and Team New York Kong finishing as the runner up at the Disney Duals.

And we haven't forgotten additional national titlewinners at the college level.  Ithaca's Ricardo Gomez won the Division III crown, while Nassau's James DeKrone went to the top of the medal stand at the NJCAA tournament at 141.

Yianni Diakomihalis Earns the Super 32 Belt . . . And Ascends to #1 in the Country

Yianni Diakomihalis entered the prestigious Super 32 Challenge in October as the #3 ranked wrestler in the nation by Flowrestling after winning the 2013 NYS large school title as an eighth grader at 99 pounds. The Hilton star was nothing short of dominant at the Super 32.  In fact, he pounded Tyler Warner of Ohio, then ranked #2 in the nation, 14-3 in the semis to earn his spot in the championship round.

The Hilton standout finished strong, with a methodical 3-0 decision over then-sixth-ranked Cage Curry of Pennsylvania in a bout that was not as close as the score would indicate. Diakomihalis became only the second New York wrestler to ever win a Super 32 High School title. (Current Hofstra starter Joe Booth was the first).  That performance vaulted Diakomihalis to #1 in the country, where he still stands at 106 pounds.

Vinny Vespa, Aaron Paddock and Austin Meys all took the mat during 2013 after facing significant challenges (cancer, a serious head injury and Guillain–Barré, respectively).  Simply battling those formidable opponents represented victory. However, it was inspiring to see the trio wrestle again - Vespa making the podium at 99 pounds for Monroe Woodbury in Albany, Paddock winning over 40 matches for Warsaw at 170 pounds and Meys, the former Shenendehowa star, representing Lehigh in a home dual against Bucknell.

The College of Mount St. Vincent added wrestling in 2012-13.  SUNY Sullivan is currently in its debut season.  And LIU Post recently announced that wrestling will return as a Division II sport for the 2014-15 campaign.  NWCA programs like Stony Brook and SUNY Westchester (and, of course, others) continue to move forward. The opportunities in the Empire State continue to grow, and we hope to see that trend continue.

We enjoyed covering a variety of events, from youth tournaments like the 900+ wrestler NYWAY State championships in March to All-Star events like the first annual Long Island vs. Upstate Challenge and everything in between.  Watching wrestling at the World's Most Famous Arena at the second Grapple at the Garden was a treat and it's great to know that wrestling will be seen at that venue in the future, given the exciting December announcement that New York City (and Hofstra University) will host the 2016 NCAA tournament.

While the Big Apple has top notch international wrestling at the NYAC every year, in 2013 we also had two duals featuring the USA vs. Russia in November - in Clifton Park and Ithaca.

And . . . Olympic Wrestling is Back

This isn't a story specific to any state, of course. However, many New Yorkers were significantly involved in the Save Olympic Wrestling efforts and one of the highly influential events was held in the Empire State.  The Beat the Streets 'Rumble on the Rails' brought together the USA, Russia and Iran at Grand Central Station, showing the strong unity behind the sport and its inclusion in the Olympics.

There were many other memorable stories in New York in 2013.  And we're looking forward to what 2014 will bring.  Happy New Year!

Thanks to Mike Carey for his help!