Those have not yet been updated to reflect last weekend's results and we understand that some wrestlers haven't finalized their weight class decisions.

Now, it's time for the remaining weight classes, which feature a number of nationally-ranked stars, such as Cheektowaga's Renaldo Rodriguez-Spencer, Norwich's Tristan Rifanburg, Mepham's Louis Hernandez and Longwood's Corey Rasheed.

As always, send us your feedback at newyorkwrestlingnews@gmail.com.  We appreciate the notes we have received so far and consider all comments as long as they are provided respectfully.

Could we see Rodriguez-Spencer and Rifanburg square off at the state tournament again?  The two met in the 132-pound NYS title bout in February after competing in the quarters in Albany in 2012.  Rodriguez-Spencer won both times in close matches.  Both are nationally ranked.

Lapi is a three-time state placer looking to end his career with another medal - a gold one.  Meanwhile, Caputo, Dunau and Ward all took fifth at the Times Union Center last year. (It was the second time making the podium for the first two).

Raccioppi was one round from the medal stand a year ago and does have a loss on his record this year - on an illegal slam call.  It was tough to narrow this list down.  We also strongly considered wrestlers such as Danny Graham of West Seneca East (came into the state tournament unbeaten last year), 2013 Eastern States placer Skylar Kropman of Penfield (defeated All-Stater Joey Butler and Fargo All-American Jordan Bushey in 2013), Lou DePrez of Hilton (state qualifier as an eighth grader) and Eastport South Manor's Jimmy Leach (second in a brutal Suffolk bracket last year), among others.

An argument can be made for multiple wrestlers to be at the head of this class.  And more than any other weight, there were numerous debates about the order, up until the time of posting. However, in the end, state tournament performance won out at the top.  That meant Vincent DePrez, a finalist the past two years in Albany, who also took fourth as a freshman, got the #1 position. DePrez handed Butler his only loss at the Times Union Center last year, while Butler beat Dutton twice in the state capital, including in the bronze bout.

However, we understand why Dutton could be ranked higher, given his quality wins over nationally-ranked Gary Dinmore of New Jersey, his title at the Iron Horse Invitational and his seventh place showing at the Super 32.

Torbitt won the NHSCA Freshman national title this spring after earning All-State honors for the first time in February.  Meanwhile, Restrepo is a threat to climb much higher after a monster offseason in which he earned All-American honors at the NHSCAs and Fargo and registered wins over DePrez and Brandon Lapi. He hasn't been at the state tournament yet, but he could certainly be a contender there in 2014.

Benderoth was one match from placing (at 120) with quality victories over former state champion Sean Peacock and All-State wrestlers such as Santo Curatolo and Travis Passaro. Meanwhile Gardner, a sophomore who has already made the podium twice in Albany, including a runner up finish in 2013, is up several weights but will no doubt make an impact.  Also keep an eye on Rocco Russo (a three-time state qualifier headed to Buffalo) and returning All-Stater Curtis Grant of Elmira, among many others.

Louis Hernandez's skills were well known inside the New York borders, but the rest of the nation got a glimpse at the Super 32 Challenge, where the Mepham senior took third in a bracket full of the country's elite.  Garcia was second at 145 last year after making the Round of 8 as a freshman.  Kress came into the 2013 state tournament as the #2 seed at this weight and Porter stood out in Fargo as a double All-American (second in Greco, fifth in Freestyle) after an injury kept him out of the postseason during the high school campaign for Shenendehowa.

Silverthorn placed at 160 the past two years and has made the podium at the NHSCA Nationals, but we're told he may finish his career at a lighter weight. Kromer was a placer last season and showed he's already in good form with an early season victory over last year's DII bronze medalist at 152 (Alex Smythe of Eden).  Ferro had a strong showing at the Super 32 (getting to Day 2) after making the Round of 8 at the state tournament.  In Albany, he defeated Hilton's Anthony DePrez, a wrestler who just missed the list. DePrez will certainly be a threat to make the medal stand for a loaded Hilton team. 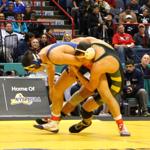 Corey Rasheed is among the nation's best at 160. He absolutely dominated his way to state and national titles as a junior and is a three-time NYS finalist.

DeCarlo, Smythe and Parfiryev all were All-State a year ago at 152 pounds. Some of these returning placers have had an early season loss - Parfiryev in a hard fought match to 2013 170-pound state champion Adis Radoncic (now at Poly Prep) and Smythe to Ryan Kromer (see 152).  We believe both Smythe, a two-time placer headed to Buffalo, and Parfiryev will be significant factors this year.

Meanwhile, Bushey put together an All-American showing at Fargo in Freestyle.  The Peru grappler was one win from placing last year at the Times Union Center. The same was true for Section 2's Lawrence.  Nate Schwab of Clarence won over 40 matches as a sophomore at 152 and was a state qualifier.  In his first bout in Albany in February, he lost in overtime to DeCarlo in the quarterfinals.  The former NHSCA All-American is capable of a big 11th grade year (he has one loss thus far, to the previously mentioned Anthony DePrez).  Among the other wrestlers we're watching are Erik Adon of East Islip, Michael Pistone of Sachem East and Jaison White of Jericho, who was unbeaten at the Pop & Flo and Journeymen Classic in the offseason.

Thanks as always to all of the contributors from around the state.  Special thanks to Mike Carey, Matt Diano and Kris Harrington.